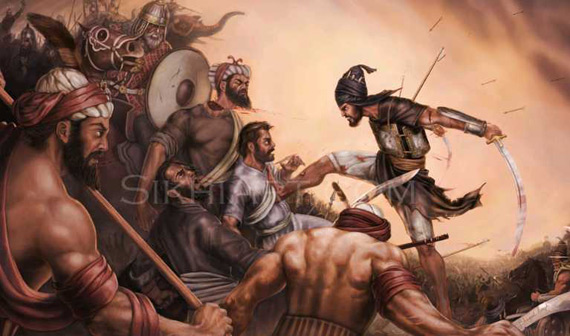 Picture: At the Battle of Chamkaur Sahib, 40 Sikhs fought the army of the Emperor Aurangzeb said to number about 100,000 soldiers. Aurangzeb was a notorious fanatic who carried on a lifelong policy of forced conversions.

Is there such a thing as 'Hindu terrorism', as the arrest of Sadhvi Pragya Singh Thakur for the Malegaon blasts may tend to prove? Well, I guess I was asked to write this column because I am one of that rare breed of foreign correspondents—a lover of Hindus! A born Frenchman, Catholic-educated and non-Hindu, I do hope I'll be given some credit for my opinions, which are not the product of my parents' ideas, my education or my atavism, but garnered from 25 years of reporting in South Asia (for Le Journal de Geneve and Le Figaro).

In the early 1980s, when I started freelancing in south India, doing photo features on Kalaripayattu, the Ayyappa festival, or the Ayyanars, I slowly realised that the genius of this country lies in its Hindu ethos, in the true spirituality behind Hinduism. The average Hindu you meet in a million villages possesses this simple, innate spirituality and accepts your diversity, whether you are Christian or Muslim, Jain or Arab, French or Chinese. It is this Hinduness that makes the Indian Christian different from, say, a French Christian, or the Indian Muslim unlike a Saudi Muslim. I also learnt that Hindus not only believed that the divine could manifest itself at different times, under different names, using different scriptures (not to mention the wonderful avatar concept, the perfect answer to 21st century religious strife) but that they had also given refuge to persecuted minorities from across the world—Syrian Christians, Parsis, Jews, Armenians, and today, Tibetans.

In 3,500 years of existence, Hindus have never militarily invaded another country, never tried to impose their religion on others by force or induced conversions. You cannot find anybody less fundamentalist than a Hindu in the world and it saddens me when I see the Indian and western press equating terrorist groups like SIMI, which blow up innocent civilians, with ordinary, angry Hindus who burn churches without killing anybody. We know also that most of these communal incidents often involve persons from the same groups—often Dalits and tribals—some of who have converted to Christianity and others not. However reprehensible the destruction of Babri Masjid, no Muslim was killed in the process; compare this to the 'vengeance' bombings of 1993 in Bombay, which wiped out hundreds of innocents, mostly Hindus. Yet the Babri Masjid destruction is often described by journalists as the more horrible act of the two. We also remember how Sharad Pawar, when he was chief minister of Maharashtra in 1993, lied about a bomb that was supposed to have gone off in a Muslim locality of Bombay.

I have never been politically correct, but have always written what I have discovered while reporting. Let me then be straightforward about this so-called Hindu terror. Hindus, since the first Arab invasions, have been at the receiving end of terrorism, whether it was by Timur, who killed 1,00,000 Hindus in a single day in 1399, or by the Portuguese Inquisition which crucified Brahmins in Goa. Today, Hindus are still being targeted: there were one million Hindus in the Kashmir valley in 1900; only a few hundred remain, the rest having fled in terror. Blasts after blasts have killed hundreds of innocent Hindus all over India in the last four years. Hindus, the overwhelming majority community of this country, are being made fun of, are despised, are deprived of the most basic facilities for one of their most sacred pilgrimages in Amarnath while their government heavily sponsors the Haj. They see their brothers and sisters converted to Christianity through inducements and financial traps, see a harmless 84-year-old swami and a sadhvi brutally murdered. Their gods are blasphemed. So sometimes, enough is enough.

At some point, after years or even centuries of submitting like sheep to slaughter, Hindus—whom the Mahatma once gently called cowards—erupt in uncontrolled fury. And it hurts badly. It happened in Gujarat. It happened in Jammu, then in Kandhamal, Mangalore, and Malegaon. It may happen again elsewhere. What should be understood is that this is a spontaneous revolution on the ground, by ordinary Hindus, without any planning from the political leadership. Therefore, the BJP, instead of acting embarrassed, should not disown those who choose other means to let their anguished voices be heard.

There are about a billion Hindus, one in every six persons on this planet. They form one of the most successful, law-abiding and integrated communities in the world today. Can you call them terrorists?