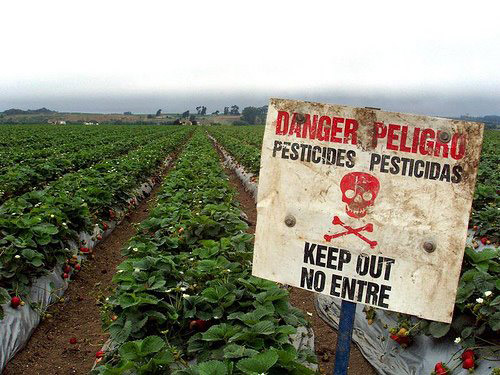 Anyone who eats vegetables in India should read these articles. They highlight the urgent need to follow Srila Prabhupada's advice and grow our own food.

NEW DELHI: Rampant use of banned pesticides in fruits and vegetables continues to put at risk the life of the common man. Farmers apply pesticides such as chlordane, endrin and heptachor that can cause serious neurological problems, kidney damage and skin diseases. A study conducted by Delhi-based NGO Consumer-Voice reveals that the amount of pesticides used in eatables in India is as much as 750 times the European standards. The survey collected sample data from various wholesale and retail shops in Delhi, Bangalore and Kolkata.

"Out of five internationally-banned pesticides, four were found to be common in vegetables sold in the Indian markets. Banned pesticides were found in bitter gourd and spinach,'' said Sisir Ghosh, head of Consumer-Voice. The banned chemicals included chlordane, a potent central nervous system toxin, endrin, which can cause headache nausea and dizziness, and heptachor that can damage the liver and decrease fertility.

Officials said the tests conducted on vegetables at the government-approved and NABL-accredited laboratory, Arbro Analytical Division, revealed that the Indian ladies finger contained captan, a toxic pesticide, up to 15,000 parts per billion (ppb) whereas ladies finger in the EU has captan only up to 20 ppb. "Indian cauliflower can have malathion pesticide up to 150 times higher than the European standards,'' said an official.

The vegetables studied included potato, tomato, snake gourd, pumpkin, cabbage, cucumber and bottle gourd, among others. "We have informed the Food Safety and Standards Authority of India about the excessive use of pesticides in fruits and vegetables that pose serious health hazards,'' said Ghosh. He added that strict monitoring from government agencies is required to check manufacture, import and use of banned pesticides. The pesticide residue limits have not been reviewed for the past 30 years, said Ghosh.

Earlier this month, the consumer organisation had conducted tests on fruits sold in Indian markets which again showed that 12 fruits, including bananas, apple and grapes, had high quantity of pesticides, violating both Indian and European Union standards. The chemical contents found in fruits were endosuplhan, captan, thiacloprid, parathion and DDT residues.

NEW DELHI: It is time to get careful while consuming fruits or vegetables. The lush and leafy green cabbage and the ''fresh'' apple may contain colours and chemicals that can lead to serious health problems.

Even after Delhi high court pulled up the state government on the issue, few steps have been taken to curb the use of harmful chemicals at vegetable markets. ''The chemicals can cause gastric ulcer, liver problems and kidney failure. People must be careful and wash fruits and vegetables properly before use,'' said Dr M P Sharma of Rockland Hospital.

Experts said bottle gourd is often injected with chemical like oxytocin for faster growth that can cause abnormal growth and other complications in human beings.

''Fruits and vegetables are brought to Delhi from several parts of the country. To maintain their 'freshness' and get a better deal out of them, suppliers and hawkers apply synthetic colours on vegetables and fruits which contain heavy metals like mercury and lead. Vendors and hawkers apply these colours particularly on vegetables like okra, beans and bitter gourd,'' said Sugriv Dubey. He filed a PIL in HC on the issue following which the court sought explanation from the government on Thursday.

Fruit sellers use chemicals like copper sulphate and calcium carbide to ripen bananas and mangoes. Sources added that in farms, pesticides and herbicides are used to excess to get better yield.

A few sellers admit some of them put chemicals in vegetables. ''We have no other option. We purchase fruits and vegetables at high price. If we sell the over-ripened or dried up vegetables, no one will buy them,'' said a vendor.

When contacted, Delhi health minister Kiran Walia said the prevention of food and adulteration department has collected samples of fruits and vegetables from markets and those found guilty would be punished. The minister did not comment on the alleged shortage of field officers in the department. The department recently purchased more than 20 refrigerators to preserve samples collected during raids.

Sudesh T Sachdeva, a fruit merchant at the Azadpur Mandi, claimed fruit sellers here do not use chemicals to ripen fruit. ''At mandi, we do not apply any chemicals or colours. May be the farmers or the hawkers do it,'' he said.

The news of chemicals in vegetables and fruits has left Delhiites worried. ''I soak all fruits and vegetables in lukewarm water before use. We often find a ripe fruit with bitter pulp. This is definitely because chemicals are being used,'' said Promila Badhwar, a housewife.

NEW DELHI: How fresh and healthy are the vegetables that you consume daily? Not much, according to the Union health ministry.

In a bid to make them look garden fresh and ensure that they grow faster to reach markets, farmers are using chemicals at random that threaten to cause serious health hazards to consumers.

Expressing concern, minister of state for health Dinesh Trivedi has said, "Eating vegetables — a must for good health — may pose serious threat to health, causing nervous breakdowns, sterility and various neurotic complications because of their chemical content."

In a letter to Union health secretary K Sujatha Rao, Trivedi has called for immediate action against farmers involved in such unscrupulous acts.

The letter outlines that the health benefits of consuming green vegetables as a staple diet finds "a sharp contradiction in the present day context". Farmers are blatantly using hormone shots to help vegetables at a faster rate. "These hormones may cause irreparable damage to our health, if consumed over a period of time," Trivedi wrote.

Oxytocin is the most commonly-used hormone, which was earlier primarily prescribed for pregnant women.

However, the Schedule H drug has been banned since then.

"The hormone can be used only on animals, leave alone vegetables. The even more shocking element is that the public/authorities may also be aware of this Oxytocin. In local parlance, it has got many names starting from cocin and 'paani to dawai', and is available at almost all the general stores," the letter said.

Oxytocin is a mammalian hormone, which also acts as a neurotransmitter in brain. The hormone is used clinically to help begin or to continue labour, to control bleeding after delivery and to stimulate the secretion of breast milk.

"Researchers have proved that the indiscriminate use of Oxytocin injections by farmers has been causing health hazards. Oxytocin is being used by fruit and vegetable growers, who administer it to the plants and climbers which grow faster and get ready for sale," warned the letter.

The injection is mainly being administered to vegetables like pumpkin, watermelon, brinjal, gourd and cucumber.

Trivedi also pointed to the rampant use of chemicals like copper sulphates for artificially colouring both fruits and vegetables. The minister hoped that the adverse effects of these toxins are scrutinised and their wanton usuage monitored and looked into immediately.

Calcium carbide is used in fruits for ripening, but can harm eyes and lungs, besides causing severe irritating and burning sensation of skin. Also, it may lead to irritation in mouth and throat, and if inhaled can cause both coughing and wheezing.