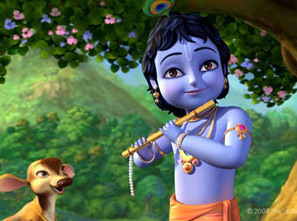 Big Animation has made Little Krishna in two formats — as three feature films of 85 minutes each, and as a series of thirteen 22-minute episodes already being broadcast in India. Earlier this month the series won the best animation award at the Asian Television Awards in Singapore. The series has already won five FICCI Frames Awards, three Golden Cursor Awards and one award each from ASIFA and TASI. Nick has since also bought licensing and merchandising rights while Hungama licensed digital rights, including mobile ring tones and digital wallpapers, and Big Home Video, another Reliance MediaWorks company, has bought the home video rights.

"We’ve been offered many other shows from India, but we never felt that they were entirely suitable for the world market. The Little Krishna series offers a fresh look from anything that we have seen to date coming out of India. It has done phenomenally well since its premiere," said Evergreen CEO Steve Walsh. Evergreen's agreement with Big Animation is on a royalty-share basis, though the deal size was undisclosed. However, market sources said the deal sizes of such products usually range between $2-3 million per film per territory.

Evergreen has already sold the broadcast and DVD rights for Little Krishna in Malaysia to Nexus IT Solutions, and in Brazil to Europa Filmes, which had distributed the Oscar-winning film Slumdog Millionaire in Latin America. The company will start marketing the series from the New York International Children's Film Festival, to be held during February-March 2010, but is already in discussion with broadcasters in Europe, North America, Latin America, Europe and Far East. "We had concerns that the series might be perceived as being too Indian, but this sale to Brazil along with another sale to predominantly Muslim Malaysia shows that our concerns were unfounded," Mr Walsh remarked.

It took seven years to produce Little Krishna, during which period its creator changed its name from Anirights Infomedia to Big Animation, after Reliance ADAG acquired it two and a half years ago. Big Animation CEO Ashish Kulkarni said the company is planning promotions across all media. "We had a good run in India and for the first time an Indian original animation IP is making its presence felt globally. The deal with a global distribution giant like Evergreen was the icing on the cake. It will give a boost to Indian animation. We are also looking to have the series dubbed in local languages across all countries, and from this month Little Krishna will be available on every major shelf in the country."