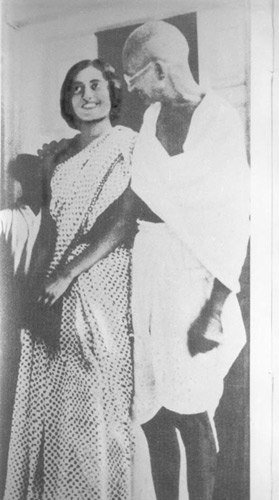 On August 22nd, 1975, Srila Prabhupada had an appointment with Indira Gandhi. In a pocket book he noted ten points to present to her. Unfortunately, Mrs. Gandhi was disturbed by rumours of a threat to her life; therefore Prabhupada did not bring up his proposal. However, these notes are testimony of Srila Prabhupada's vision of a Krishna conscious India.

The ten points are:

Editor's comment: Srila Prabhupada wanted Western devotees to come to India to learn about Vedic culture, and to preach, establish centres, and inspire Indians to maintain their valuable religious heritage.

Editor's comment: This means initiated by a bona-fide spiritual master as Vaisnava brahmanas.

Editor's comment: Srila Prabhupada always stressed that monarchy is superior to democracy. A powerful and enlightened king like Lord Rama or Maharaja Yudhisthira should take guidance from ideal brahmanas and rule the country for the sake of dharma. Srila Prabhupada suggested that Sanjay take charge of the country and bring Rama-rajya back to Bharata.

Editor's comment: In 1929 Jawaharlal Nehru (Indira Gandhi's father) in a public meeting stated that if he were to become the prime minister of India, the first thing he would do is to stop all the slaughterhouses.

Editor's comment: How could Srila Prabhupada expect popular support for his proposed reforms? The answer lies in chanting Hare Krishna maha mantra. The maha-mantra is very powerful. It purifies the consciousness and awakens love of God. If people are induced to chant Hare Krishna, their hearts will certainly change and thus they will become model citizens and the backbone of an ideal state.

(6) Meat-eaters at home. No public meat-eating

Editor's comment: Meat-eating is not good, but it cannot be fully stopped, for there will always be a class of men attached to flesh food. However, meat-eating should be restricted. If slaughterhouses and butcher-shops were closed, meat-eaters would have to personally kill any animal they wanted to eat. This would certainly reduce indulgence in this ghastly practice.

(8) No religious group except followers of Bhagavad-gita

Editor's comment: 83% of India's population are Hindus, followers of Vedic dharma. Vedic culture originated in India with the birth of different avataras like Sri Rama and Sri Krishna. India is the spiritual homeland of all Hindus and should remain so.

Editor's comment: Among the people in general, kirtana should be promoted, especially for government officers. India can make no progress as long as the administration is spoiled by self-interest and corruption. Government officers should chant Hare Krishna and help manage the state on behalf of God and for the benefit of the citizens.

(10) Support Krishna consciousness all over the world

Editor's comment: If the government of India would seriously support the world-wide promotion of Krishna consciousness, a global revolution of religious thought would take place. India would become the intellectual, cultural and spiritual leader of all nations.