In "Marylanders Desperate To Contact Indian Relatives," the following was written:

"For Baltimore residents with relatives in or near Mumbai, there's a tremendous sense of helplessness. Most are waiting to hear and wondering whether family and friends are among the victims. The pictures tell a violent and horrible story of death and destruction. The hope of Jai Gaurasundara das is that the dead and injured are not related to the more than 200 devotees of his Catonsville-based Iskcon Hare Krishna congregation." 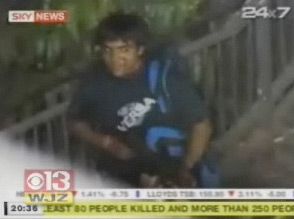 Why express concern only for (hope) "that the dead and injured are not related to the more than 200 devotees of his Catonsville-based Iskcon Hare Krishna congregation?" Why not be concerned for all who are being made to suffer in this ordeal – those who have been killed and/or injured, all of the relatives of these people who have been killed and/or injured, even concern for the killers as these murderers will have to suffer horrible karma for their nefarious acts?

Let's take it further, human-wise: There is hatred and fighting all over the world, with terrorism of all forms of expression everywhere. Put aside the "official" terrorists – those Muslims considered terrorists who we generally think of when we here the word "terrorist" – and consider all the other terrorists (as there are so many others than simply the Muslim terrorists we identify with when we hear the word "terrorist") as well as the forms of terrorism which exist. So much fighting between people, all based upon bodily (MIS)conception brings on ALL of this terrorism, from the so-called Muslim extremists blowing up buildings, planting bombs to kill whoever happens to be present, to African people's hatred of other African countrywo/men, with subsequent attacks, maimings, tortures, rapings and killings in Africa, this hatred based on tribal origins. (I might even add on that in quite a number of the countries here, the heads of state – leaders who are SUPPOSED to be PROTECTING the praja – have in so many instances tortured and/or killed their people, even cutting off the limbs of children, crippling them for life. There are more gory details that can be given, but let's spare the reader.)

WAKE UP!!! JIVA JAGO!!!, such things are going on in so many places in the world, either to a larger or smaller degree. This world is a NASTY place, and Kali has His tentacles ALL OVER!!!

There's the hatred based on color, religion, race, political affiliation, and even within the so-called "devotee" world, hatred based on guru; who has accepted discipleship under which guru, certain devotees hating others only because they have accepted so and so as their guru. Even we find in this (LACK OF) "Krsna conscious" world certain gurus hating other gurus, and instilling such a NASTY (bodily MIS) conception to their disciples. Even in the so-called "devotee" world we are finding SO MUCH MATERIALLY (HATRED) bases politics. WHY??? So why are we concerned only with the recent horrors of Mumbai, "that the dead and injured are not related to the more than 200 devotees of his Catonsville-based Iskcon Hare Krishna congregation."

Why is the murderer killing his victim? – outside the legitimate reasons given for Vedically sanctioned killing of an aggressor? (Srila Prabhupada's BG 1.36 purport gives six aggressors for whom killing them is sanctioned.) Other than someone's being an aggressor and being killed as a reaction for such aggression, all other murders are committed due to bodily-centered reasons; hatred, greed, envy, lust, anger, false pride, and illusion – the six enemies of the heart. Why is there raping, looting, maiming, bullying, holding others as slaves, captives – one can go on and on. Because of one's identifying oneself as the body, and due to the various six enemies of the heart, one acts on such terror principles. Attacking someone, or even holding someone up with a knife, and/or gun, and not using it to kill or physically hurt them, but simply having such a weapon to scare the person into having them do what it is you want them to do; even just by putting a person into fear and stealing their possessions, or simply to put another person into fear just for the sake of doing so, are forms of terrorism. (There are different degrees of terrorism.) So this world is FILLED with terrorism.

But we can take it further: Why not feel concern for ALL the jivas who are being made to suffer ALL of the various horrors which are part of this material world. This includes the animals, plants, insects, fish; all from the indragopa (germ) to Lord Indra himself. Padam padam yad vipadam na tesu. There is danger at every step. We are all being terrorized by janma mrtyu jara vyadi duhkha dosanudarsanam. (BG 13.9)

How many other living forms besides humans are being terrorized by humans, this terrorization taking its form in so many ways, from slaughterhouses, to chemical pollution, wastage and ruin of Material Nature's gifts, and all in-between. And what about our own individual selfishness, which if we analyze it, may be taking a form of terrorism.

We live in a world of terrorism:

The fly caught in the web of the spider suffers as hir life juices are sucked out. The mouse, frog, lizard suffers as s/he is strangled then eaten by the snake. The whale is finished off by the timingila fish, while the wildebeast goes down to the lions, and the crocodile leaves its prey injured; limbs missing, and left to drown a hellish death, then its body to be eaten by the crocodile; (SB 1.12.47) jivo jivasya jivanam.

Material nature is such, that ANY JIVA who resides within Durga Devi's realm experiences some form of terror(ism). In writing the above, I'm not doing this to minimize the terrorism and/or suffering that has taken place in Mumbai and in other places in the world. Rather, I'm saying that Krsna is trying to give us BIG warnings to get us all to WAKE UP, and SEE the reality, both of this material world, and to come to the ultimate reality, of Krsna's Spiritual World; that of pure love, Krsna Prema.

This material world is a NASTY place, yet we – yes, even we as hoping to become devotees – are still thinking there is something "here" to be had. Punah punas carvita carvanam; chewing the old bubble gum we put underneath the desk, we're thinking we can get some "juice" from it, but we can NOT!

Srila Prabhupada, our Guru Varga Acaryas, and our respective Gurus have told us everything; everything we need to help ourselves, AND to help OTHERS overcome this material existence. If somehow we can give up the bodily conception which is causing us to put up our "boundaries" with others, especially with other devotees (of the same Sampradaya) – based on such FOOLISH "isms" as "my guru (is better than) your guru," "I'm from X organization, and you're from Y organization, (therefore I'm better than you)," etc. – and can come TOGETHER, UNITE, as is the REAL mentality of the Vaisnava community, then in actuality, we can conquer over this terrorism and ALL of the anomalies of Kali Yuga.

"Although Kali Yuga is an ocean of faults, there is still one good quality about this age: Simply by chanting the Hare Krsna Maha Mantra, one can become free from material bondage and be promoted to the transcendental kingdom."

"In the Age of Kali, intelligent persons perform congregational chanting to worship the incarnation of Godhead (Sri Caitanya Mahaprabhu) Who constantly sings the names of Krsna. Although His complexion is not blackish, He is Krsna Himself. He is accompanied by His associates, servants, weapons, and confidential companions."

"In this dark age of Kali yuga, sincere devotees of the Supreme Lord should leave aside all other means for liberation and take full shelter of the Holy Name. This is their real responsibility and duty. There is unlimited bliss in chanting the different names of Krsna; Hari, Kesava, Govinda, Vasudeva and Jaganmaya. For one who chants constantly with unflinching faith, he remains unaffected by the reverses of Kali Yuga, because his heart has become purified by chanting."

Whether we are in a situation of direct terror(ism) or not, may we always be chanting the Lord's Holy Names, and by His, Sri Caitanya Mahaprabhu's Lord Nityananda's, and Sri Guru's mercy be able to give such to others.

May we always remain under the shelter of Hari Guru and Vaisnava's Lotus Feet!

This lowly and fallen servant,
B. Radha-Govinda
Hare Krsna