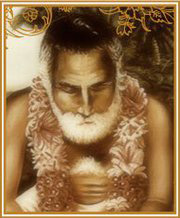 After his wedding, a rich man from Calcutta, who had taken shelter at the lotus feet of Srila Bhaktivinoda Thakura, wished to know how he could utilize his time in hari-bhajana while situated in married life. With that purpose in mind, he approached Srila Bhaktisiddhanta Sarasvati Thakura for instruction. The wealthy gentleman became very depressed when he was informed by Sarasvati Thakura that there might well be various obstacles in his attempt to perform hari-bhajana as a householder.

Later on, this gentleman, accompanied by Srila Sarasvati Thakura, went to meet Srila Gaura-kisora dasa Babaji Maharaja on the riverbank at Kuliya. When it was mentioned to Srila Babaji Maharaja that the gentleman had married, Babaji Maharaja commented, "Yes, it is all right that he has married. From this time on he will daily cook and offer foodstuffs to Lord Visnu. After offering it to Him, he will serve the prasada to his wife, and then as a Vaisnava he will take her prasada remnants. He will consider her as Krsnaís servitor and his spiritual master. He will not think of her as an object for sensual gratification. Everything in this world: wealth, jewelry, men and women, are all for worshipping Krsna: That which is meant for Krsnaís service should be utilized as such. Do not consider your wife as one meant for your service. Instead, respect her as a servitor of Krsna."

Here is the purport to Babaji Maharaja's foregoing discussions with householders. The sense of proprietorship of one's spouse is to be eschewed, and the conception of one's spouse as Krsna's worshipable servitor is to be nurtured. When one regards one's mate as the servitor of the Lord and thus suitable for His enjoyment only, one can easily transcend the urge to indulge in illicit sex which so bedevils many a married couple.