"A candidate for spiritual advancement must be nonviolent, must follow in the footsteps of great acaryas, must always remember the nectar of the pastimes of the Supreme Personality of Godhead, must follow the regulative principles without material desire and, while following the regulative principles, should not blaspheme others. A devotee should lead a very simple life and not be disturbed by the duality of opposing elements. He should learn to tolerate them." (SB 4.22.24) 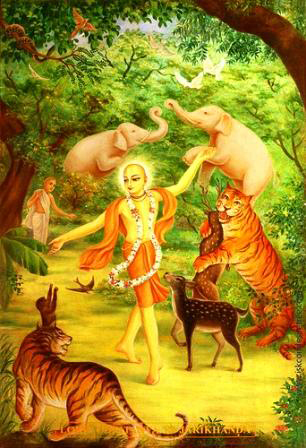 The devotees are actually saintly persons, or sadhus. The first qualification of a sadhu, or devotee, is ahimsa, or nonviolence. Persons interested in the path of devotional service, or in going back home, back to Godhead, must first practice ahimsa, or nonviolence. A sadhu is described as titikshavah karunikah (Bhag. 3.25.21). A devotee should be tolerant and should be very much compassionate toward others. For example, if he suffers personal injury, he should tolerate it, but if someone else suffers injury, the devotee need not tolerate it. The whole world is full of violence, and a devotee's first business is to stop this violence, including the unnecessary slaughter of animals. A devotee is the friend not only of human society but of all living entities, for he sees all living entities as sons of the Supreme Personality of Godhead. He does not claim himself to be the only son of God and allow all others to be killed, thinking that they have no soul. This kind of philosophy is never advocated by a pure devotee of the Lord. Suhridah sarva-dehinam: a true devotee is the friend of all living entities. Krishna claims in Bhagavad-gita to be the father of all species of living entities; consequently the devotee of Krishna is always a friend of all. This is called ahimsa. Such nonviolence can be practiced only when we follow in the footsteps of great acaryas. Therefore, according to our Vaishnava philosophy, we have to follow the great acaryas of the four sampradayas, or disciplic successions.