Several prominent Buddhist groups in Thailand (some of them strict vegetarians) invited Dr Sahadeva dasa for a series of countrywide programs and visit to their communities. They hosted a series of TV shows with him.  His talks covered a wide range of topics –from  Lord Buddha and promulgation of Buddhism to fate of modern civilization, ancient solutions to modern problems, absolute morality and ethics, comparative theology etc.

Some of these Buddhist groups are politically very influential and strict vegetarians. They have created exemplary self-sufficient communities, producing their own food and leading a chemical and plastic free life. One of the communities lives in boat houses, grows  its food on barges and even have a floating supermarket selling the community wares. There were few mantra concerts, both in private homes and in public places.

Thailand is a tropical paradise and culture is very similar to that of India.  Centuries ago, Buddhism went there and the country became officially Buddhist. Thai Monarchy still wields power and everything there appears to be colourful, exotic and full of life. Religion plays an active role in people’s lives and in the morning, groups of monks  can be seen wandering everywhere, begging alms.  Sanskrit words are very common and there is this huge diorama, right at the Bangkok airport, depicting the Srimad Bhagavatam story of churning of ocean by demons and demigods.

Many Buddhist leaders were surprised to know that Lord Buddha is an incarnation of Vishnu and that He is mentioned in many of our prayers. Some of them wanted to study Srimad Bhagavatam to further augment their understanding of Buddhism. Vegetarianism is growing rapidly and every town and city now has vegetarian and vegan restaurants. 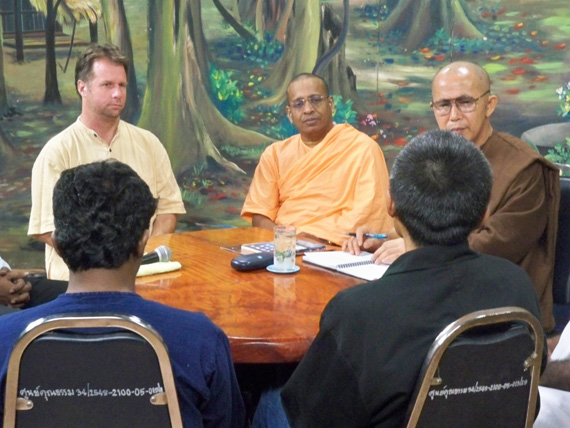 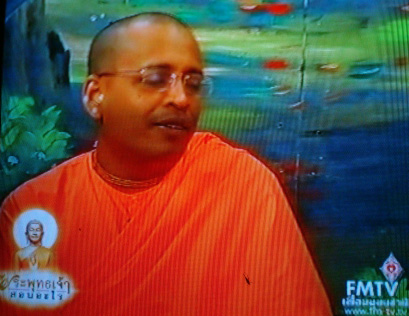 More photos of the visit can be seen at his pages here: