In his Viveka-cudamani, Sri Sankaracarya says,

"These three are difficult to obtain in this world, and depend on the mercy of God – the human birth, the desire for salvation, and the company of great-souls." (Viveka-cudamani 3) 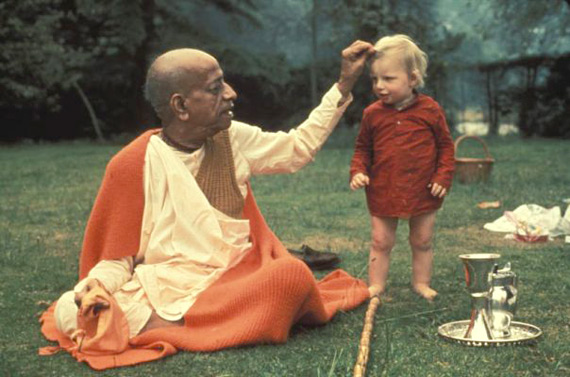 The jivatma, having come to this material world accepts many different bodies in its journey – tree, bug, bird, animal, human, demigod, etc. Being bound by the body, limited life and karma, the jiva enjoys and suffers the fruits of his activities in every body. The jiva accepts four different types of bodies – svedaja (engendered by sweat and steam: microbes, germs etc), udbhijja (vegetable kingdom), andaja (born from eggs) and jarayuja (born from paramour: human beings and the animal kingdom), over and over and only because of some sukrti, human life is attained. Of the 8,400,000 species of life only in human life can one attempt to understand spiritual knowledge.

Having attained this gift of human life if one does not utilize it to understand the self, the Supreme, the way to go back to Godhead and with determination practice it under the guidance of a real guru, this life is simply wasted. Wealth comes and goes like a dream. Youth withers like a flower. Old age waits like a tiger. Diseases thrash like enemies. In an improperly burnt earthen pot, water is lost without our notice.

Similarly, human life is lost every moment without us realizing it. With yogic power the wind can be stopped, ether can be cut into pieces, waves in the ocean can be collected together and many more never-before occurring things can be done. But death cannot be checked. With the passage of time, earth will be burnt, Mount Meru will melt, and oceans will evaporate. It is no surprise then that this body will vanish. Having drunk the wine of worldly illusion the jiva remains ignorant to the truth of life. He sees others around him suffering and dying every day but still lives as though he is eternal.

Of the hundred years of human life, half is spent in sleep, twenty years in childhood and twenty years in old age. In the remaining time, when he is strong and capable, the unintelligent man spends his morning in cleaning his body, day time in working hard to maintain his family and social status and spends the night in sex and sleep. Like this his entire life is spent wastefully. The jiva thinks that wife, children, wealth and relatives are his. He thinks, “I have done so much and so much more has to be done”. As he is engrossed in thinking like this, death jumps like a wolf on the sheep-like jiva and drags him away to hell.

Therefore self-realization has to be done now; pious activities have to be performed now. Because death does not wait for anyone thinking this person is planning to do all this. Old age shows the way towards death. When one gets old he should understand that soon he will die. The enemy called death marches towards us aided by soldiers called diseases. Only the Supreme Lord Sri Hari can protect a jiva from death. Sri Krsna says in Bhagavad-gita:

What is this mahato-bhaya (greatest danger) for every jiva? It is indeed death because death takes him away from his loved body and the loved ones to an unknown destination. He gets scared at this thought about death and feels totally insecure and lost.

Like a lump of flesh, cut by the weapon of desire, mixed with the ghee of senses, cooked in the fire of attachment and aversion, death eats away the man. The young, the old, the children, the one in a womb — are all consumed by death. Eating, sleeping, mating and defending are equally available for all animals. Only a human being can know by his intelligence what is good for him and what is not. If he does not understand this he is considered equal to an animal.

We have this human life for a short time. This world is duhkhalayam (full of miseries) and asasvatam (temporary). Therefore when one has sound mind and sound senses, one should do the activities of self-realization. Prahlada Maharaja in his instructions to his young schoolmates says:

Right from age of eight one has to perform devotional activities in the footsteps of great devotes of Sri Krsna. An old adage in English goes – “What you learn at eight remains till eighty.”

In the association of saintly persons, one can understand the purpose of human life. Association of saintly persons and intelligence are the two eyes of a man without which he is blind. Attracted by karma-kanda, people chant so many mantras, perform many rituals and fire sacrifices (homa and yajna) and punish their body with severe fasting and other austerities. Bewildered by mahamaya (worldly illusion) and bereft of proper knowledge of the absolute and the purpose of human life, these people are uselessly punishing their body and wasting their life. Having long matted hair and a big beard does not make one guru or yogi. One does not become a yogi just by living all his life on the banks of Ganga. If it was so, the fish and frogs living in her waters would become yogis. One does not become tapasvi by giving up food and living only on water. If it was so, the cataka bird and paravata bird who never drink water on the earth would become tapasvis.

Trying to search for the Supreme Brahman, people fall in the blind well of sad-darsanas (the six philosophies of India). Of the sad-darsanas, the first is the Vaisheshika philosophy of Kanada Rsi. According to him, everything is made of atoms. So many atomic particles have combined and produced this world by chance, with no necessity of any reason, rhyme, consciousness, nothing of the kind. And the outcome of these combinations has produced what we find here.

Kapila Rsi has come with the Sankhya philosophical system of analysis saying, “Analyze matter, and you will be free from all this pain.”

Patanjali Rsi has come with Yoga, “Hey, jivatma! Come to meet Paramatma! Then all the problems of this world will go away from you. Come in connection with Paramatma, the Supersoul.”

Gautama Rsi comes with logic, nyaya-sastra: “There is one Maker, one Creator, but He is indifferent. He has created the world, finished, and left it. And you must try to live with the help of your reason. Be a good logician, and then you will be able to control the environment with the power of reason and you will be happy.”

Jaimini’s Karma-mimamsa says “There may be One who has connected us with this world and our karma, but karma is all in all. He has got no hold on us any longer. According to our karma we shall thrive or we shall go down. So, stick to karma, good karma; don’t go to bad karma. There is God. He is bound to serve you according to your karma. He has no independence.”

Srila Bhaktivinoda Thakura in his song: Kesava! tuya jagata vicitra, talks about these six philosophies and then says, “But I have come to realize that these fellows are all cheaters. And they all have this common stand: they have no touch of your devotion, your service. There, they are one. They cannot deliver any real good. They are common to oppose your devotional service and supremacy. And ultimately they leave us in chaos.”

Concluding the song, Bhaktivinoda Thakura says, “I bid goodbye to them all. I feel in my heart that I shall show respect to all these so-called good agents from a distance, however my only real capital is the dust of the holy feet of your devotees. I rely on that dust as the source of all my prospects. I seek to put all my energy into taking the dust of their holy lotus feet upon my head. This is everything for me.”

Some people read the Vedas, Vedanta, Puranas and so many other scriptures and preach to people. They are called jnanis by the ignorant public. In spite of their vast reading they fall short of understanding the essence of all the Vedika knowledge like the serving spoon that does not know the taste of the dish that it serves.

Sri Kaviraja Gosvami says: bahu sastre bahu vakye chitta bhrama haya – reading many scriptures and hearing too many people will simply confuse the mind. In this regard there is a verse in Garuda Purana.

"There are many sastras but a short life span. Even in that short human life there are many troubles and difficulties. Therefore, like a hamsa (swan) bird that takes only milk from the mix of milk and water, only the essence of all scriptures has to be taken."

Pariksit Maharaja, being cursed by the brahmana that he would live only seven more days, approached Sri Suka Mahamuni and asked him how he must spend the remaining seven days of his life. Sri Suka Muni, a self-realized soul, an avadhuta and a great devotee of Sri Hari spoke Srimad Bhagavatam to the king continuously for seven days. He could just as well have spoken from other Puranas, Vedas or Upanisads, but he chose to speak the Srimad Bhagavatam. This drives home the point that Srimad Bhagavatam is the sum and substance of all transcendental knowledge in this world.

And what does Srimad Bhagavatam talk about? It talks only about the sweet pastimes of Lord Hari, His glories, His activities and His all-merciful devotees. Therefore Sri Caitanya Deva says that Srimad Bhagavatam is the natural commentary on Vedanta-sutra and He held this book close to His heart.

King Pariksit was fortunate enough to know when his death would come. We ordinary mortals only know that our death is certain. It may come right now, next moment, a month later or after. The message, however, from King Pariksit’s life is that human life is meant only for serving the Supreme Lord Sri Hari by any or all nine processes of bhakti, namely hearing the glories of Lord Hari (sravanam) and chanting those glories (kirtanam), constantly remembering Him (smaranam) and offering prayers to Him (vandanam), serving the Lord’s lotus feet (pada-sevanam), serving the supreme Lord as a servant (dasyam), worshipping Him with flowers and incense and so forth (arcanam), serving Him as a friend (sakhyam) and completely offering the Lord one’s very self (atma-nivedanam). This life is meant for nothing else, absolutely nothing.

Understanding this, one has to approach a bona-fide guru who is well versed in the science of Krsna and lives outside the consideration of varnasrama (jaiva-dharma). Such a guru instructs his disciple about:

(a) Knowledge of one’s relationship with the Supreme Lord, the living entity, the material world and the relationships between them (sambandha-jnana) (b) The process of achieving the goal of life (abhidheya) (c) The goal of life itself (prayojana). After receiving this knowledge, a living entity needs no other knowledge. All kinds of scientific and theoretical knowledge of this world are automatically known to Him. (Sajjana-tosani)

Based on the time (kala), place (desa) and circumstance (sthiti), the guru will appropriately engage his disciple in the service of Sri Hari and His devotees. When the disciple follows the instructions of such a guru with sincerity, determination and humility, his life will be successful. Sri Caitanya Mahaprabhu says:

"Millions of souls are wandering in the universe from planet to planet and body to body. Among them only the most fortunate one, by the mercy of guru and Krsna, gets the gift of seed of creeper of devotion (bhakti-lata)." (Cc. Madhya 19.151)

Let us preserve this priceless gift and nourish it in our heart so that the seed sprouts and the creeper of bhakti grows, piercing through all the universes and finally touching the lotus feet of Sri Krsna in Goloka Vrndavana where it bears the fruit of krsna-prema, spontaneous and unconditional love for Sri Krsna, the ultimate goal of life.