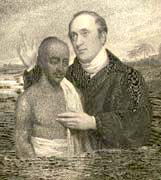 Hindu Americans, still reeling from an election season that saw high profile Republican Party candidates scorn adherents of minority faiths in the United States, were treated to another attack on pluralism from a state senate candidate in Minnesota. Republican Rae Hart Anderson, who was defeated by a margin of nearly 40% in her bid to unseat Sen. Satveer Chaudhary of District 50, wrote a rambling concession email over a week after the election in which she called on the senator to convert to her Christian faith as she said he needed to be “forgiven.” Sen. Chaudhary is a practicing Hindu.

The Hindu American Foundation (HAF), which has a full-time staffed office in Washington, D.C. to promote human rights and religious liberty issues in government, contacted the Minnesota Republican Party office Monday. The foundation demanded that the GOP in Minnesota repudiate Anderson’s correspondence as she was the GOP’s chosen candidate to represent the northern suburbs of Minneapolis-St. Paul. At the time of this press release, no response had been received from the GOP office.

“The race of your life is more important than this one–and it is my sincere wish that you'll get to know Jesus Christ as Lord and Savior,” wrote Anderson in her email. “Jesus is the way, the truth and offers His life to you and each human being. Pay attention…this is very important, Satveer. Have you noticed Jesus for yourself…at some moment in time, yet???”

Anderson continued on the same message for another five paragraphs beseeching Sen. Chaudhary to convert without discussing the electoral race they had just completed. Local print and broadcast media picked up the story of the conversion call and the email was roundly derided in the blogosphere. In response to an inquiry from the Star Tribune newspaper in Minneapolis, Anderson’s campaign manager said, “Chaudhary is not Christian. He needs to find his soul.”

“Hindu Americans are active participants in the political process, and over a dozen Hindus were candidates in national and regional races throughout the country this year,” said Suhag Shukla, Esq., legal counsel of HAF and a resident of St. Paul. “Anderson obviously hid her overt bigotry until after the election, and Hindus can only wonder how they would have fared had the election results been different and their senator considered their faith inferior at best, and outright evil, at worst.”

HAF had already condemned similar ultraconservative and exclusivist remarks made by other candidates this year. Congresswoman Katherine Harris (R-FL) stated in late August that "If you're not electing Christians, then in essence you are going to legislate sin," and Republican Governor Rick Perry of Texas publicly agreed with a pastor onstage after he asserted that non-Christians are going “straight to hell with a non-stop ticket.”

“Republicans have been among the strongest voices backing HAF on Capitol Hill on their issues, and many Hindu Americans are loyal supporters of the GOP,” said Ishani Chowdhury, the Executive Director of HAF who is not related to Sen. Chaudhary. “But at HAF, we are distressed by the intolerance and disrespect for Hinduism and other minority faiths displayed by a few prominent Republican candidates this year in pandering to the right wing Christian conservative vote—a clear and present danger to the pluralistic ethos our founding fathers valued so much.”

Anderson’s insinuations of her religion’s superiority took on new meaning in light of events earlier this year in the Minneapolis suburbs. The main Hindu temple, situated on nearly 30 acres, was heavily vandalized in the spring by a group of rampaging youths. HAF members expressed concern that when politicians demean and dismiss their faith and heritage without reaching out to understand its precepts, Hindus and their institutions become easy targets when the prevailing mood is of intolerance.