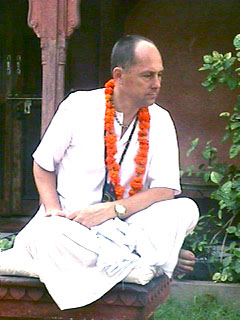 Since 1970, he shared his insights and understanding with tens of thousands around the world, delivering lectures on Bhagavad-gita in more than 20 countries.

He received a Masters degree in Gaudiya Vaishnava philosophy through the Special Majors program at Sonoma State University. He was a founding member of the World Vaishnava Association.

After the departure of Srila A.C. Bhaktivedanta Swami Prabhupada (his spiritual master), he accepted his Godbrother, Jagad Guru Siddhasvarupananda, as his siksa guru. He had been instrumental in preaching in so many places. His preaching record has no limits. He was running a business in Sacramento of medical billing and a tape ministry called Transcendental Sound from the offices. But he was usually in the Philippines, Russia, Poland, and Swiss or with his siksa guru in Hawaii. He didn’t have much time to spend in his business, which was employing many devotees as well. He used to organize humongous Krishna-katha and Harinam chanting festival. Those retreats used to last for many days and his sweet kirtan went on for hours with apparently no end, and then in his classes he would answer every question meticulously so that everybody would be amazed. He conveyed the love for Sri Guru in such a way that many of the disciples of Jagad Guru, who had not had the chance to meet him personally, were growing with Tusta Krishna’s love and care. Thus he opened so many branches of the mission of Lord Chaitanya. Definitely chanting the holy names was one of his favorite activities. He preached up a storm. Dedication to Sri Guru was for him a law and not an option. He wanted the Chaitanya mission everywhere in the world. He sent missionaries to Hungary and Germany.

As an international preacher he could appreciate immediately the urgent need of the World Vaishnava Association.

When you are out there in some country, where nobody knows the glories of bhakti-yoga, and young children of influential people start joining your ashram, you can be sure that it is important that you will be looked upon as a genuine world religion, a recognized way to God, rather than some guru personality cult which has neither tradition nor pure values as has been seen here and there and has created in many people great fears what to speak when their own children are getting totally involved with a very little known monastic group.

Due to somebody joining a temple, we have seen entire temples being arrested. Humongous press scandals and many heavy persecutions. Tusta Krishna knew that it was essential that Vaishnavas have a forum were they can present themselves jointly to the world, where they recognize each other with respect and where the roots of Vaishnavism, sanatan dharma, are associated with the Hindu world religion. Therefore he approached different Hindu-organizations when there was any chance to protect the dignity of Srila Prabhupada teachings.

He started the press office of the World Vaishnava Association and led the anti Xeena campaign when they were offending our deities for their amusement.

Tusta Krishna’s desire was that there should be a Vaishnava News Site where all the missions can join in to share their positive spirit and positive contributions and to witness conjointly how the prediction of Sri Chaitanya Mahaprabhu is manifesting in such a miraculous way.

He was very concerned that when people come to study about Gaudiya Vaishnavism, they should find a common forum of mutual appreciation of different Vaishnava missions—a forum which was not interested to discuss any type of conflict in public and does not participate in any speculation, rumors and not even in justified criticicm of the deficiencies of other Vaishnavas.

Previously pages like VNN gained notorious popularity by publishing any accusation presented by any contributor. Similar attitudes are to be found in other websites who are well visited. He did not want to present internal difficulties in or amongst Vaishnava institutions mixed with an Internet news page which is there to glorify Krishna and our spiritual masters and their service to the world.

For this reason he started VINA (in 1998), to help people in the world respect the message of our gurudeva. Sriman Purandara Prabhu and his wife dedicated much energy to VINA. Sripad Ananda Maya Prabhu did all the work for VINA for many years alone, he is a handicapped person who cannot walk, still he does so many different types of devotional service and surely accomplishes more than most of the people who have no handicap at all.

But he solved the whole case before the judge. He asked her whether she had a ring on her finger. She remained silent. Then he asked her whether when she became a nun and they put a ring on her finger they had told her that she was becoming the wife of Jesus. Again she remained silent. Then Tusta Krishna turned to the judge and all in the courtroom and said:” She criticizes Krishna for his many wives but worships Jesus who is married to all the nuns in the world.” After a great laughter the judge dismissed the case in favor of the Vaishnavas.

After a few years of intensive cell phone usage he got strong headaches and a brain tumor was discovered. What followed was the departure of a great Sankirtan general from this world. He accepted the situation and kept preaching and encouraging all. An operation was recommended but promised little or no hope for a cure. Gaining time maybe. But his beloved siksa guru told him to be close to him in Hawaii. Being close to guru is being close to Krishna. There is the highest Vrindavan. He was chanting with incredible intensity. We were all holding our breath. Here he was leaving us fixing every atom of his body on Krishna. It was glorious. The passing of a surrendered soul back home back to Godhead. As Srila Prabhupada had promised to us.

VINA requests all the acharyas and their secretaries to not be shy and to send news about their mission, share with us anything which makes you happy, any new book published in your mission, any music recorded, any CD-Rom, any new temple opened, any special preaching accomplishment, any nectar you like to share with others from the acharyas of the present or of the past, any special photo nectar, share the joy with us.