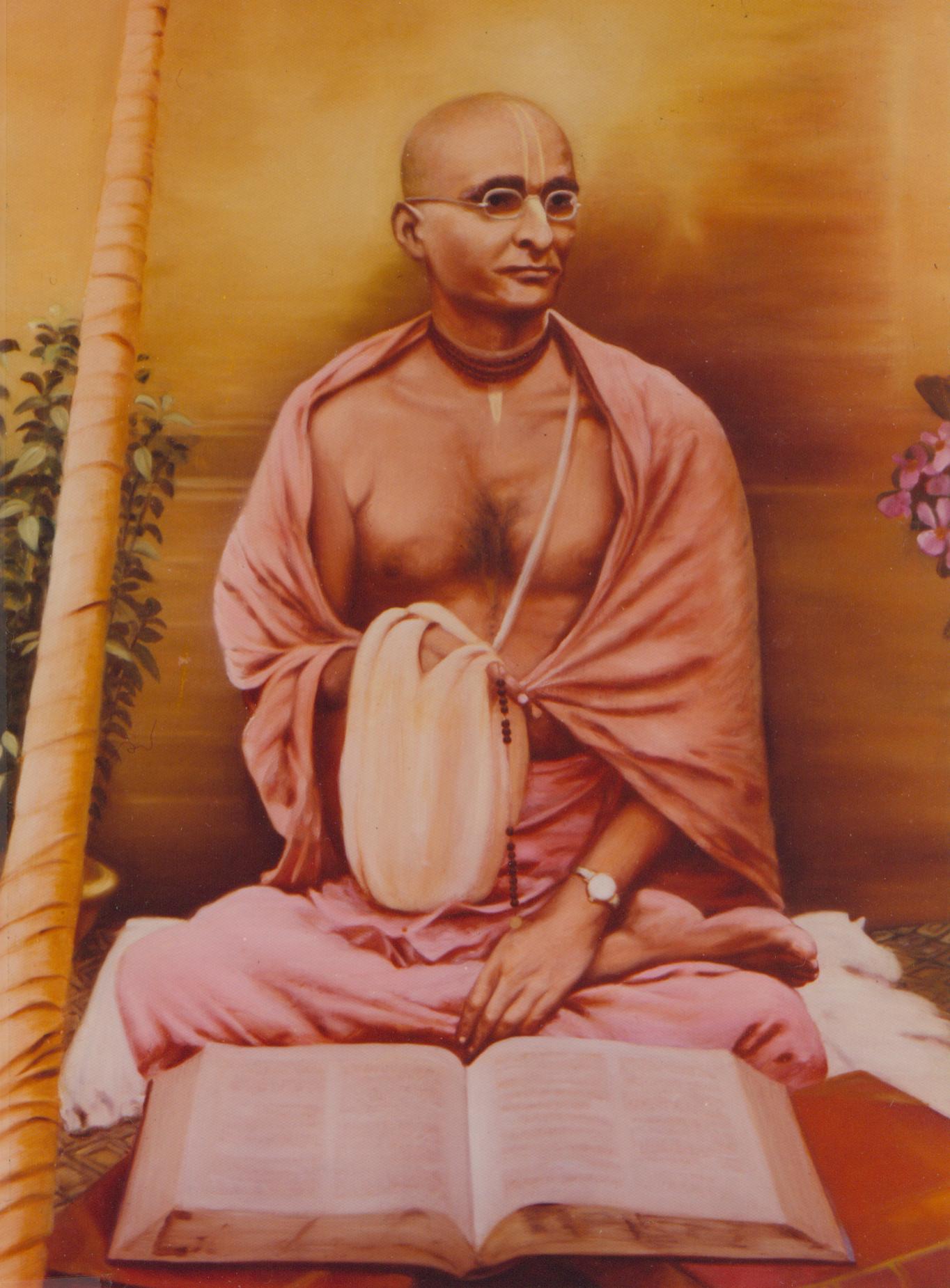 We get the essence of Śrī Caitanya Mahāprabhu’s teachings in His Śikṣāṣtaka. His Lordship does not lay much stress on arcana (temple worship). He taught us to serve śrī nāma (God’s names). At the very outset He has said that it is necessary to chant Śrī Kṛṣṇa’s names in the right manner, thoroughly. He also taught that the names and their possessor are identical; there is no difference between them. When an object is spoken about and described fully, it is shown to be completely analyzed. God’s names, appearances, attributes, associates and sports – these five constitute śrī nāma. These are present within God’s body, which is śrī nāma. For one who chants śrī nāma, there may be mutually variegated specialities among subsets of these five – for example, pairings like His names and forms together, or His names and attributes together – but they are not separate from one another.

If a man desires to see God’s form, or beauty, he should know that it is not visible to the material eye. Form or beauty that can be perceived by the material sense of vision is an object of enjoyment. But it is God, Kṛṣṇa, who is the enjoyer and not an object of enjoyment. An enjoyable object gratifies our senses. As the Śrīmad-Bhāgavatamsays, God is not visible to our eye, so what the eye sees is not the beauty of God.

Among the objects of the material world, there is a distinction between a name and whatever or whoever possesses that name. But this is not the case with the names of Śrī Kṛṣṇa, which are transcendental. For this reason, Śrī Gaurāṅgadeva (Caitanya Mahāprabhu) has said, “Śrī kṛṣṇa saṅkīrtana should be our only means for getting the object of our pursuit, love of God, Śrī Kṛṣṇa.”

Mahāprabhu has said, ‘vijayate śrī kṛṣṇa-sankīrtanam,’ the saṅkīrtanaof Śrī Kṛṣṇa’s names should be specially glorified. Saṅkīrtana means kīrtana, or chanting, by many in coalescence, or it means kīrtana of Śrī Kṛṣṇa that has details of His names, forms, attributes, associates and sports. Such saṅkīrtana is the object of special glorification.
We know that for practitioners of bhakti there are nine kinds, or limbs, of bhakti (devotion to God):

1. audition – hearing God’s names and glories
2. chanting – resounding them
3. remembrance of Him
4. serving His feet with adoration
5. worshipping Him with rituals
6. adoring Him with praise and salutation
7. servitorship to Him
8. friendship with Him
9. offering Him one’s very self

In Śrī Bhakti-rasāmṛta-sindhu (the Science of Devotion, by Śrīla Rūpa Gosvāmī) these nine have been elaborated on and expanded to encompass sixty-four items. Of these sixty-four, five have been regarded as pre-eminent. This is recapitulated in the Śrī Caitanya-caritāmṛta (Madhya-līlā 22.125–126) as the following:

1. association with holy saints
2. chanting the holy names of God
3. audition of the Bhāgavatam
4. residence in Mathurā
5. service to śrī mūrti (the deity form) of God, with firm faith

These five limbs of devotion are the most important, and the performance of them, though so few in number, generates kṛṣṇa-prema (love of God).

It is felt after a careful consideration of these five best practices, that śrī nāma-bhajana (service of God’s names by chanting with ardent longing) is at the root of them all and is glorified above all. Sādhu-saṅga (association with holy saints) has been proposed in order to create a taste, or inclination toward śrī nāma-bhajana, which is the result of association with holy saints who are themselves attached to śrī nāma with firm faith and who chant the holy names systematically.

The Śrīmad-Bhāgavatam has declared śrī nāma-bhajana alone to be the highest virtue. Therein, it states:

In this world, the superior dharma for mankind is remembered as bhakti-yoga (the performance of devotion) to God, beginning with the chanting His holy names.
Śrīmad-Bhāgavatam (6.3.22)

“The Kali-yuga, which is the sea of all evils, has only one merit, and it is a great one: in Kali-yuga one attains God and becomes free from all worldly attachments by chanting God Kṛṣṇa’s names and glories. What is obtained in Satya-yuga by meditation on Viṣṇu, in Treta-yuga by worshipping Him with yajña (sacrifices) and in Dvāpara-yuga by worshipping Him with rituals, is obtainable in the Kali-yuga by śrī hari-kīrtana.”
Śrīmad-Bhāgavatam (12.3.51–52)

In the beginning, middle and end of the Śrīmad-Bhāgavatam, the efficacy of śrī nāma-sankīrtana has been repeatedly advised. The principle of nāma-bhajana is deeply set at the root of Mathurā-vāsa, or śrī dhāma-vasa (residence in the places of God’s adoration), for sādhus, who are always engaged in śrī nāma-saṅkīrtana, frequently visit those places. Service to śrī mūrti is conducted using mantras(incantations) that are framed around God’s names, so that His names will be chanted in the process. Thus śrī nāma-kīrtana is glorified above all and all success is available through it. Śrī Caitanya-caritāmṛta (Antya-līlā 4.10) also states:

Among all kinds of bhajana, nine are the best, as they are very powerful in giving love of Kṛṣṇa, and even Kṛṣṇa Himself. The foremost among them, again, is nāma-saṅkīrtana. One who chants the names of God, remaining free from aparādhas (offences), is sure to gain the wealth of Love of God.

Adapted from The Gauḍīya, Volume 8, Number 6 by the Rays of The Harmonist Team