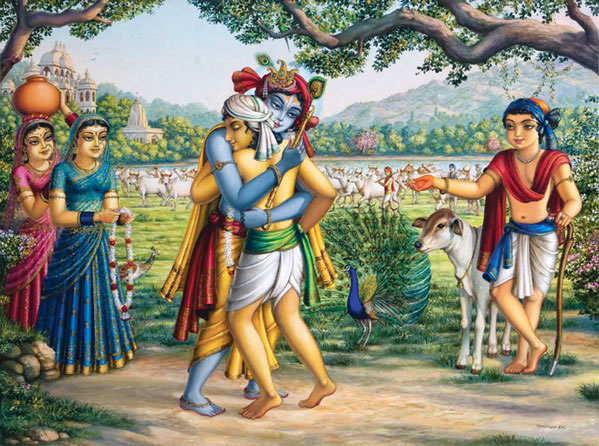 Oh beloved yogis and followers of Sripad Shankaracharya and other versions of philosophies which deny the supreme his eternal identity and deny that all souls like you and me are allowed, at a certain level of mercy received, to have a personal relationship and interaction with Bhagavan and his divine sweet will.

You are the most wonderful people. You practice austerities, you read the Vedas, you interpret the Bhagavad Gita, you do many social spiritual uplifting activities and you travel throughout India to the holy places. Sometimes you even worship deities like Radha Krishna, Lakshmi Narayan, Sita Rama. Or other expansions like Lila-Avatar Narasimhadeva, Vamanadeva, Varahadeva and Kurmadeva. Sometimes you glorify great devotees like Sri Hanuman, Sri Ganesha and some of you also worship Kartikeya, some others Brahma and many worship Lord Shiva.

All this is part of your beautiful sadhana behaviour and your traditions. We honour from the deepest part of our heart how you have imbibed this Vedic culture in your personality, your lifestyle, your ashrams, your pilgrimages and that you often go beyond the shores of India to take Hinduism to other places of the world.

This is all very admirable. As a matter of fact, when Swami Vivekananda came to Chicago, his universal, spiritual preaching was so highly appreciated that it practically put Hinduism on the world map. Because people could understand that the vision of these people is so broad, so generous and so spiritual – Where as many of those Abrahamic religions still think that only those who become members of their institutions have any chance for spiritual liberation, upliftment and freedom within their conceptions. Therefore it was a fresh breath that Swami Vivekananda gave in the parliament of world religions with his inspired talk about the broadness of Hindu understanding.

This broadness also comes from understanding the nature of Brahman. Brahman being omnipresent and omnipenetrating, gives the open clarity that everything which may exist in the world is also Brahman. It doesn’t matter what religious conception they have or if they have no religious conception, nobody can escape from being part of Brahman. They just don’t know it, and they think that they are this body, this Russian, American, or Chinese body. Often they do not pay any attention to the underlying principle of consciousness and life giving power which is not material and which does not depend on this physical body. The physical body becomes just an instrument for realising higher things and the mental and intellectual bodies becomes tools so that we can practice the yogic sciences.

The yogic sciences are self control. They’re focusing on the body, the breath and then, after some discipline has been achieved in the physical existence, through karma yoga they focus on becoming generous, charitable, non egotistical, to work for the welfare of everyone and to connect with all those who do such things – Rather than to connect with the egotistical, materialistic people who just want to exploit the whole world for their little pleasure.

Then comes jñana yoga, which you also promote so much, to study the scriptures and to study the commentaries to the Vedanta sutra like Sharirarika Bhashya by Sripad Shankaracharya. And you promote to become scholarly in the science of yoga, memorizing your mantras.

You’re breathing the foundation of realization, called Vasudhaiva Kutumbakam – the whole world is one family. So you’re lovable people, and most bright and generous when it comes to accepting the whole world as being part of Brahman.

There is another part of the Vedas which you do not give much of a mention and you do not have such a clear understanding of apparently, and that is the Paramatma feature. The paramatma feature is where some divine guidance is conscientiously directed to each and every individual from within his heart. The Vedas says that there are two birds in the same tree; one is enjoying the fruits of the tree and the other one is watching him. So this watching part is also a part of the divine, of the expansion of Chaitya Guru, Ksirodakasayi Vishnu, Purusha Avatar, as the Vedas describe. The Vedas has given a lot of insight on who Paramatma is, what he looks like and how he accompanies the living beings throughout the journey of their existence.

This means that there’s not only Brahman, there’s also a conscious guide. Somebody you can interact with, somebody who can answer your prayers, somebody who can affect the karma upon you. Because otherwise, if there is no higher supervision, no higher conscious entity of supervising, then please my friends – how would karma work? It would be like all cosmic laws are installed in every atom and this cosmic memory just puts everything into an automatic mood. Well, in that case all the descriptions of mercy, upliftment and exceptions would not find any place. Therefore there must be a cosmic, conscious entity who is aware of each and everyone of us, and who directs our repass by guiding us from within, or by sending a spiritual teacher into our life who can train us up and engage us in devotional or yogic practices. So this position of Paramatma is a necessary function. If we want to do away with it or say that you yourself are your own Paramatma, then that doesn’t make any sense my friends, because you’re not pulling yourselves out of the quicksand. There’s no way to pull your own hair out of this quicksand. You need another person to help you or you’ll be lost.

So now we come to another very important thing and I beg you to bare with me in this connection that before we cast any judgement, let us simply have a deep consideration what the Vedic scriptures has given us in this relationship. I could call it nitya sambandha, nitya Iila or eternal relationship. There’s descriptions of God and his pure devotees interacting with each other in a world which is called Goloka Vrindavan or Vaikuntha. There’s so many descriptions of the pure devotees who are totally dedicated and living eternally in that sphere, which the Vedas has given. If we do not take this in consideration and do not give the possibility to the soul to join such a relationship with the infinite when he wants to give this grace to us. And If we exclude these informations and describe them to be something like mayasic lilas that are destined to disappear within the Brahman, then that would make us extremely sectarian. That would be a great misunderstanding of the Vedic teachings.

If you’re sectarian even though you think you’re not and even though you are posing as a representative of the highest universal Brahman principle, you’re not giving this chance which the Vedas puts so much emphasis on and gives so many stories and testimonies on – of interactions between the devotees and the lord. In the stories of the Sanatan Dharmas and the Puranas, plenty of such examples can also be found and also in the Mahabharata by the presence of Lord Krishna. In this Mahabharata he’s always been accepted as an extraordinary personality of divine descent.

Everything becomes alive within personal relationships. To think that when the Mahabharata is finished, everyone including Krishna, Arjuna, and Yudhisthira simply disappear into the Brahman and that they’re now non-distinct and non-conscious. That they’re not conscious of us aspiring students of the Vedas, not conscious of their lord and that their lord is not conscious of them either, is an extremely sectarian way of interpreting the Vedas. It’s not giving any chance to the souls who aspire in bhakti yoga. We aspire for a loving relationship with the lord.

You know very well that bhakti yoga has been strongly emphasised in the Bhagavad Gita and in other scriptures as a most colourful taste of rasas, of divine relationships. It’s natural that those who are suffering in this material world, frustrated with mundane sensations, aspire for something of divine relationship. They aspire for something where love is a real governing principle. The dynamics of the individual soul are manifest in the possibilities of the different rasa relationships with the supreme lord which are thus; santa rasa, dasya rasa, sakhya rasa, vatsalya rasa, and madhurya rasa.
All this has been exemplified and glorified all over the Vedas.

Therefore, I make this humble plead to you, to at least be open minded and give it a chance that this divine world of Bhagavan may actually exist. Because your sacred scriptures hint towards this strongly even if you personally have a preference to merge into the Brahman, which is your right to have. “Brahmeti Paramatmeti Bhagavan iti sabdyate”. The vedic scriptures describe this mukti moksha, which is a liberation that is also available by divine grace. But it has many varieties, so there are slokas like “salokya sarsti samipya sarupya ekatvam apy uta” – That there are different types of liberation. Not only ekatvam or Brahman mukti realisation. The Vedas describe other liberations also.

It would be very helpful to the future and for the appreciation of Hindu philosophy around the world, if all the three aspects could be recognized and presented as options for the soul to choose from. Otherwise we may end up knowing less about divinity than many other tribes in the world who often worshipped the divine in it’s masculine and feminine features. They’re giving recognition to this feminine and masculine feature, like the original couple who has brought everyone into existence in the cosmic powerful ways they have acted.

I write these letter to you in preparation of the many works that we’re going to do together to take care of mother Earth. She is in utter despair because of the carelessness of even some spiritual institutions, who go to Kumbha Mela and construct huge styrofoam palaces there, decorating everything. It is a glamorous show of temporary items which are totally poisonous and contaminating, which are left lying around after the Kumbha Mela is finished, causing an incredible recycling problem for the city of the Kumbha Mela.

This is just one example of why we all have to come together and take advantage of this Kumbha Mela conciousness, that the whole world is one family, to show the top glory of India and the top glory of Sanatan Dharma. That is definitely not sectarian. It is broad, it is loving, it is full and everybody should culminate in it.

Thank you very much!