This visit was an impulse for the expansion of the spirit of the World Vaishnava Association, which was established by Srila Jiva Goswami some centuries ago, to increase the enthusiasm of the devotees in South America to create a more united Vaishnava community around the world.

As Nitya Lila Pravista Om Vishnupada 108 Sri Srimad Bhakti Pramode Puri Goswami Maharaj told at the WVA meeting in Vrindavan, on October 20th, 1995 “The World Vaishnava Association is offering a great opportunity for all of us to come together under a unified ideal.”

Devotees all over the country were full of joy by the mercy of the association of this sadhu. The visit of Sripad B.P. Muni Maharaj extended for more than one month. He arrived on May 5th, visiting the main temples in the prominent regions of the country starting from the capital where he visited temples such as Sri Gaur Nitai Mandir, SEVA Mahaprabhu Mandir and Prema Mandal.

On May 7th Sripad Muni Maharaj attended the 34th anniversary of the Prana Pratishta Mahotsava, the installation of their lordships Sri Sri Guru Gauranga Radha Vrajesvara, Isthadevata of the Vrinda Mission Mula Math in Varsana, located on the outskirts of Bogotá, the capital of Colombia.

There he led the Maha-Abhisekh ceremony for their lordships, reciting vedic hymns and performing sacred bathing ceremonies for the murtis. On this occasion, he gave special katha about the importance of the manifestation of the lord as the Arca-Vigraha reciting some famous pastimes of some of the main deities of Orissa such as Saksi-Gopal and Kshira-Chora Gopinath.

Next day Maharaj ji left to visit another farm located in Arvelaez, 2 hours from Bogotá. This farm is called Vrindavanita (little Vrindavan), where older devotees of the yatra have their refuge. Among them are 4 Sanyasis of advanced age and very enthusiastic.

Muni Maharaj in Vrindavanita
1 of 4

On May 9th, the auspicious appearance day of lord Nrisimha Deva, Sripad Maharaj, attended the festival at Gour Nitay mandir, where local devotees gathered for a nice Nrisimha Kirtan. Sripad Maharaj gave a beautiful speech about Prahlada Maharaj and Lord Nrisimha. A devotee from Bolivia performed a musical offering with a string instrument from the “Andes Mountains”.

Sripad Maharaj then continued to Cali, the third largest city in the country, where he visited the local devotees and gave lectures at the city temple. He also visited a farm called Yogendra Ashram, located 1 hour away from the city.

Maharaj also went out for Nagar Sankirtan in downtown of Cali, preaching to the people around with the help of Hanuman Prabhu, his sevaka and personal translator for his Colombia tour.

After the program in Yogendra Ashram, Maharaj traveled to Armenia, a city in a beautiful area called “Eje Cafetero”. There he visited the main temple at the Mahavan Eco Yoga Village, where many devotees attended to hear his wonderful Hari Katha.

From there he went to visit more cities in the area such as Cartago, Pereira and Manizales. In Pereira, he visited the farm of a local devotee with hot springs, waterfalls and a stunning landmark. There Sripad Maharaj discussed deep Hari Katha topics with Sripad BV. Acarya Swami and Sripad BV. Vamana Swami.

On May 16th the trip continued to Medellín, the second biggest city in the country, where Sripad Bhakti Vichar Bishnu Maharaj and Sripad Bhakti Pranatha Muni Maharaj met in the Jagannath tempe in the downtown area. this was also the auspicious occasion of the Abhirbhava Tithi of Nitya Lila Pravista Om Vishnu pada 108 Srila Bhakti Bimala Harijan Maharaj, the first Acarya and spiritual master of Colombia. Sripad Bhakti Rakshak Swami Maharaj also joined the celebrations.

Sripad BV. Bishnu Maharaj arrived one day earlier, on May 15th. Next morning he gave very nice Hari Katha about the advantage of the human form of life. Together with Sripad BP. Muni Maharaj he led nice kirtan prayers to Sri Chaitanya Mahaprahu in the beautiful Radha Kshira Chora Gopinath Mandir in Medellín called “Ganges”.

Later they joined 150 devotees for the Abhirbhava Mahotsava in downtown Medellin for Hari Katha, discussing topics about Guru Tattva and the importance of unity between Vaisnavas through the Vishva Vaishnava Raj Sabha, the World Vaishnava Association and the spirit and teachings of Nitya Lila Pravista Om Vishnupada Paramahamsa 108 Sri Srimad Bhakti Sidhanta Sarsvati Thakur Goswami Prabhupada.

Sadhus in Medellín
1 of 4

On May 17th Sripad Bishnu Maharaj gave a beautiful Hari katha speech about the love exchange between Lord Jagannath and Sri Bandhu Mohanti. In the evening a public program was organized during which 250 people got the opportunity to hear the teachings of Sripad Muni Maharaj and Sripad Bishnu Maharaj. A cultural show of dance and music concluded the program.

In Pereira Sripad Bishnu Maharaj held programs of Hari Katha in two different places. he audience of devotees were very happy and enthusiastic on hearing the divine talks of Sripad Maharaj.

On May 19th, a public program was organized for Sripad Maharaj in an Auditorium in Bogotá, where 400 people listened to his speech about “Atma-Tattva, The Science of Self Realization”.

The following day, Sripad Maharaja visited a local preaching center called “Maha” to speak about the importance of the Sankirtan Movement. An ecstatic one hour kirtan followed by Maha-prasadam distribution (from Mayapur) concluded the program.

Bishnu Maharaj was very enthusiastic meeting the devotees in the local preaching programs.

During the evening program at Gournitay Mandir, Maharaj gave a lecture about Anugatya Dharma, the importance of following a superior bonafide guide on the path of devotional life. He also elaborated on Srila Bhaktivinoda’s Thakur Song “Ohe! Vaishnava Thakura”.

On May 21st, Sripad Bishnu Maharaj visited Varsana, where he inquired about the different programs that are being developed in this Eco-Yoga Village. He also visited the Maha Samadhi of Nitya Lila Pravista Om Vishnupada 108 Srila Bhakti Bimala Harijan Maharaj, the theme-park “Krishna the Defeater of Obstacles”, the organic agriculture farm, the “Sanctuary of Wate” (the place where Harijan Maharaj used to do his Gayatri Japa) and the new restaurant which is under construction.

Maharaj led ecstatic Kirtans and spoke about the Importance of devotional service. He also answered some question of the attending devotees, and met with some disciples of A.C. Bhaktivedanta Swami Prabhupada.

He continued his tour around the preaching programs in Bogotá giving enthusiasm to the local devotees, and leaving on his way engraved in the hearts of devotees, the meaning of pure dedication to the mission of divine love.

Here you can listen to the KIRTANS and LECTURES of Sripad Bishnu Maharaj in Colombia.

Meanwhile Sripad Muni Maharaj, was visiting the coast area of Colombia. In places like Cartagena, Barranquilla and Santa Marta local devotees were very excited to meet a Dham Vasi Sadhu and to listen to his teachings.

He also visited the local temple in Cartagena, called “The Yoga Sanctuary”, “Govinda’s” in Barranquilla, “Yogamaya Mandir” in Santa Marta, and the farms “Gambhira” and “Los Vedas”. In every place Maharaj gave special lectures and left instructions to the local devotees on how render surrendered service to Sri Guru and Vaishnavas.

This meeting between Vaishnavas was a unique experience for the local devotees, it is an example for non-sectarean International Vaishnava association. 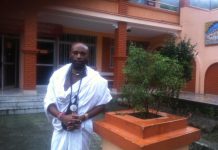 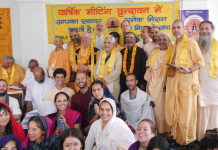 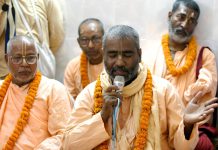 The Future of the World Vaishnava Association