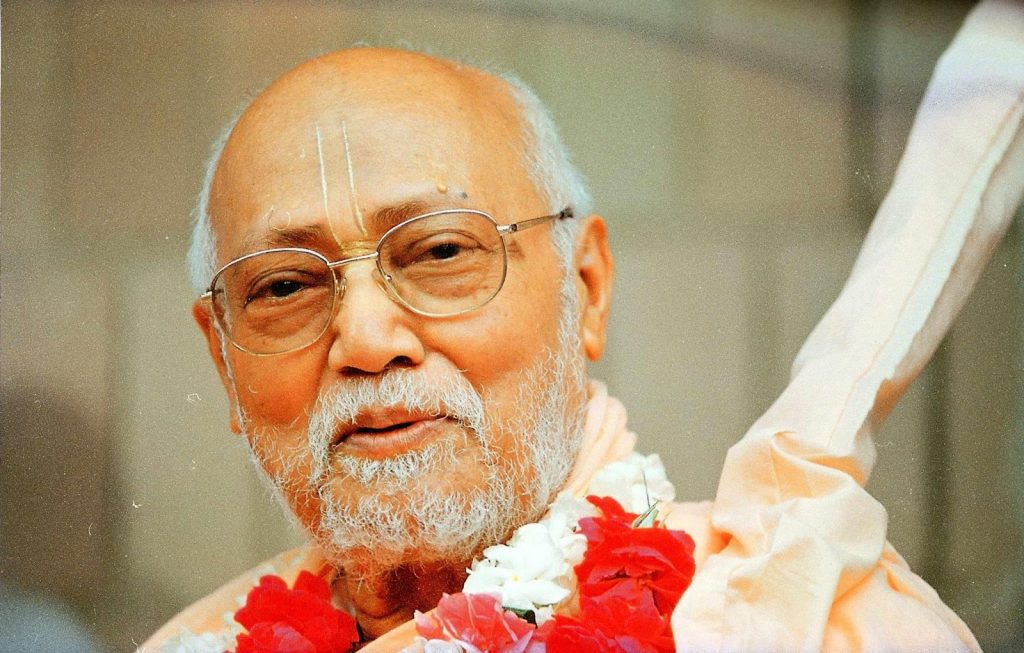 As per the lunar cycle, Srila Maharaj, His Divine Grace’s appearance and disappearance both occurred on the same Navami Tithi (ninth day of lunar cycle). Srila Maharaj appeared on Ram-Navami day and the day of his disappearance was also on Navami (6th of Vaishakh 1424 Bangavda , 20 April 2017 Thursday at 10.15 pm). This is indeed astonishing!

In this regard I would like to quote from Sri Chaitanya Charitamrita (SCC), one of the most valuable scripture of Gaudiya Vaisnava community, written by Srila Krishnadas Kaviraj Goswami, who is Kasturi Manjari in the eternal abode, Goloka Vrindavan, serving Sri Sri Radha-Krishna, the Divine couple in their divine esoteric pastimes.

We all know Lord Sri Ram Chandra is the incarnation of proper etiquette and conduct (Maryada Purushottam). Similarly as per my observation, the character of His Divine Grace represents proper spiritual etiquette for the present generation of the Gaudiya Vaisnava community to follow. Therefore the Supreme Lord first sent and then physically took His Divine Grace away from us on the same 9th day of lunar cycle (Navami Tithi).

Looking back I remember once there was some disagreement amongst devotees in Sri Chaitanya Gaudiya Math, due to the influence of Kali-Yuga. However Srila Bhakti Ballabha Tirtha Goswami Maharaj in his resolve for maintaining vaishnava etiquette always honored his Godbrothers and simultaneously advised his disciples that they should keep tolerance and respect all his Godbrothers and vaishnavas. I heard from his lotus lips that if we were not able to free ourselves from vaishnava offenses, then our devotional service will not be accepted by our worshipable Deities, (Sri Sri Guru and Gaurango and Sri Sri Radha Govinda jiu).

Srila Bhakti Ballabha Tirtha Goswami Maharaj’s disappearance pastime makes me feel that the Gaudiya Vaisnava community has lost a valuable asset. Someone who taught the devotional path by setting his own example! Srila Maharaj was and will continue to be a valuable devotional guide and preceptor for all of us.

I remember one incidence which occurred after the disappearance of my spiritual master. For some reason I was on the verge of leaving service of my Gurudev. When Srila Bhakti Ballabha Tirtha Goswami Maharaj came to know this, he called for me through HH Srila Bhakti Prajnan Hrishikesh Maharaj, the then Math-in-Charge of Sri Chaitanya Gaudiya Math in Kolkata. Srila Maharaj then gave me a most valuable instruction, “Close your eyes, ears and mouth which meant ignore all undesirable talks and unworthy sights. Speak properly when necessary and in this way patiently hope for the mercy of the Supreme Lord. Thus you will realize the mercy of Sri Sri Radha Krishna coming to you through Srila Puri Goswami Maharaj.” Since then I am following his this instruction which helps me to face any unusual and strange predicaments. Thus I realized the importance of this valuable instruction.

Although, I am like his disciple, in both age and experience, whenever I went to pay him obeisance, immediately he would offer me the same without hesitation.

In conclusion I would like to say that Srila Maharaj was the perfect embodiment of etiquette, humility, tolerance together with congregational chanting which the Supreme Personality of Godhead, Sri Krishna in the form of Sri Krishna Chaitanya Mahaprabhu established for delivering the fallen souls from this age of hypocrisy (Kali-Yuga).

Today, I am falling at the lotus feet of His Divine Grace Srila Bhakti Ballabha Tirtha Goswami Maharaj to beg for strength to be able to continue with my services of the Mission of my Spiritual Master, my grand Spiritual Master – His Divine Grace Srila Bhakti Siddhanta Saraswati Goswami Thakur Prabhupada and Sri Krishna Chaitanya Mahaprabhu, just the way he did all his life with purity.

An unworthy and aspiring servant of the servant of Sri Sri Radha-Govinda.