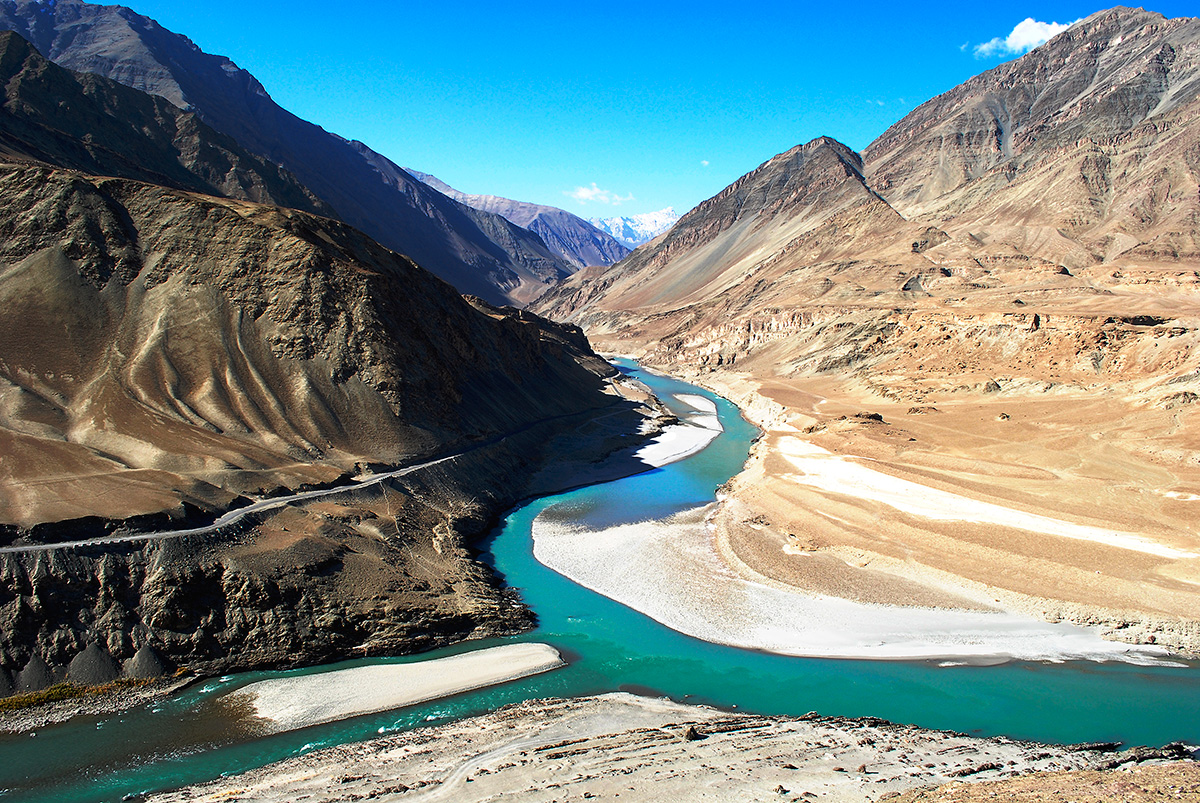 The Sindhu River is one of the great holy rivers of India, from which the name of India is derived. However, unlike other holy rivers in India such as the Ganga, Yamuna and Sarasvati, the Sindhu is masculine.

The Sindhu is virtually unknown to people in western countries, but for the people of India it has great significance. Indeed, the Sindhu gave birth to the earliest of India’s civilizations known as the Indus Valley Civilization. For those readers who know their history, then the names of ancient cities and archaeological digs at places like Harappa and Mohenjo-daro will be familiar — the land of the ‘Aryan Invasion’ – a topic of much debate, even after more than 200 years of research and scholarly studies.

But one fact is for sure — human civilization along the banks of the Sindhu River has been present since hoary antiquity. Archaeological evidence shows human habitation along the Sindhu for at least the past 17,000 years. In truth, the name Sindhu is older than civilization itself and is mentioned in the classical histories of ancient India such as the Rig Veda (170 times), the Puranas and in the Iranic Zend Avesta. On modern world maps the Sindhu is marked as the Indus.

Beginning at Lake Manasarovara, at the base of Mount Kailash (the mountain sacred to Shiva) on the eastern side of the Himalayas in what is now western China (old Tibet), the Sindhu/Indus flows westward crossing into India into the Ladakh district of Jammu and Kashmir. The Sindhu then takes a southerly route, traverses the plains of Pakistan and merges into the Arabian Sea near the port of Karachi – a journey of 3,180 kilometers (1,980 miles).

According to the Mahabharata (Bhisma-parva, ch.6, Verse 48) the spiritual – sometimes considered mythical – origins of the Sindhu River is stated as being due to the austerities of King Bhagiratha in Satya-yuga. Bhagiratha was attempting to free his ancestors from bad karma and their suffering in the lower planetary systems of Patala-loka. After performing his penance Bhagiratha summoned the sacred River Ganges to Earth. The Ganges descended from the heavenly planets and thereafter formed six separate rivers – three flowing to the east (the Hladini, Pavani and Nalini), and three flowing to the west (the Suchakshus, Sita and Sindhu). The seventh branch, the Ganga, then flowed from the Himalayas to Ganga-sagara, entering the Bay of Bengal, and then down to Patala-loka.

If not mythical, then the story of King Bhagiratha and the Sindhu is certainly mystical and no doubt took place a long time ago when the world was quite different.

Indeed, the etymology of the name of ‘India’ takes us on a journey back in time and is also closely associated with famous personalities in western history such as King Darius of Persia, Alexander the Great, Megasthenes and others.

In bygone days, the people living east of the Sindhu commonly referred to themselves as Aryans – a term originating from the Sanskrit word arya, a self-designation meaning “honorable, respectable and noble”. But for the Arabs, west of the Sindhu, they were the al-Hindus, and for the Persians they were the Hindus.

It only came to pass, after centuries of use, that the word Hindu came to designate a people with particular religious beliefs. In the beginning ‘Hindu’ was simply a general designation for anyone living east of, or along the banks of the Sindhu. It also came to pass that the word Hindu became Sanskritized and the land of the Hindus became known as Hindustan, meaning ‘land of the Hindus’ — a name that is still in use today in India.

Thousand of years ago the people living between the Sindhu and the Himalayas called their land Bharata-varsa, the land ruled by Maharaja Bharat (in Treta-yuga), a character of great repute who is mentioned repeatedly throughout the Puranas. Prior to the reign of Maharaja Bharata, the land of Bharata-varsa and for that matter the entire planet Earth was referred to by the Aryans as Ajanabha (thus indicating a One World Culture once upon a time).

West of the Sindhu was the empire of Persia – an empire so vast that it stretched from the Sindhu to the Mediterranean Sea. Though originally part of Bharata-varsa, Persia’s ancestors had lost their connection to Aryan culture in Bharata-varsa, and well before the time of the Mahabharata War in 3138 BCE they had become known amongst the Aryans as Yavanas. Yavana is derived from the Pali word Yona, also used to identify the Greeks. These Yavanas were also sometimes referred to as Mlechhas.

In Bharata-varsa lived two half-brothers, Vasistha Muni and Jarutha (circa 6000 BCE). The brothers quarreled over theistic issues and afterwards Jarutha traveled west of the Sindhu to present day Iran in search of converts, eventually converting a king named Vistaspa. Jarutha had a philosophy of his own liking, quite different from that found in the traditional Aryan (Vedic) literature, but in the kingdom of Vistaspa, Jarutha found acceptance. Thus began the religion of the Zoroastrians and its founder, Jarutha, became known as Zarathustra or Zoroaster.

Incidentally, for the people of China during the early period, the land between the Himalayas and the Sindhu was called ‘Yin Du’ and for the people of Japan, pre-modern India was known as ‘Tenjiku’ meaning ‘the Heavenly Center of the World’.

In his book “Indica”, while recounting the exploits of Alexander the Great, the Greek writer Megasthenes calls the mighty Sindhu the ‘Indus’ (the name still retained today). Thus Indus is a Hellenic derivative of the Persian and Arab word Hindu, from the Sanskrit Sindhu.

Greeks also called the land east of the Indus ‘Indike’ or ‘Indica’. And from the Greek we finally arrive at the English spelling ‘India’ first used by King Alfred (circa 9th Century) in his translation of the writings of Paulus Orosius, a Christian apologist (circa 375) who wrote in defense of the Pagan idea that the Roman Empire had declined due to its acceptance of Christianity.

Thus a modern nation attained her name “India” – beginning with the Sanskrit ‘Sindhu’, to the Persian ‘Hindu’, to the Hellenic ‘Indu’ and ‘Indica’, to the English, the name of India and a nationality of people was born.

In contemporary times the sentiment of many Indians is to change the Europeanized names of their cities back to their original names. Bombay has changed to Mumbai, Madras to Chennai, Bangalore to Bengaluru, Mangalore to Mangaluru and so on. One wonders then if India will eventually return to her original Sanskrit name of Bharata-varsa?[1] #footnote1

I recently took a trip to Ladakh primarily to have a darshan of the Sindhu River and to complete my having visited all the main holy rivers of India, namely the Ganga, Yamuna, Godavari, Sarasvati, Narmada, Kaveri and Sindhu. It was a rewarding experience in all respects, and as for the landscape in and around the Sindhu Valley, it was absolutely stunning – snow capped peaks, glaciers, rivers, an inland salt-water sea (Pangong Lake) and rugged mountain people of Tibetan Buddhist descent.

Travelers such as myself have been coming to Ladakh for a very long time. Legend has it that Jesus of Nazareth traveled to India/Ladakh in his youth to study the teachings of the great Buddha. In the 19th Century, Nicolas Notovitch, a Russian aristocrat traveling in Ladakh, reportedly happened upon a remote mountain valley and visited the monastery of Hemis, belonging to the Drukpa lineage of Buddhism. There, Notovich claims to have discovered an ancient manuscript/gospel that described Jesus (Issa) as having come to Ladakh and studied with Buddhist monks. Notovitch claimed that at the monastery of Hemis he discovered the ‘Gospel of the Life of Saint Issa, Best of the Sons of Men’. His story was published in French in 1894 and was later translated into German, English, Spanish and Italian — a popular book for the public, but one that created quite a stir in scholarly communities.

As far-fetched as Notovich’s story may sound to many of us, it is plausible that Jesus may have come to India at one time or another. The Third Century Christian prophet Mani (founder of Manichaeism) is well documented as having come to India and studied Buddhism – something that he later introduced into Gnostic Christianity and which flourished between the Third and Seventh Centuries. At its height Manichaeism was one of the most widespread religions in the world. Manichaean churches and scriptures existed as far east as China and as far west as the Roman Empire. So if Mani did it, why not Jesus?

Christian Gnostic Gospels also account the story of Jesus sending his disciple Thomas to India to preach the word of God, so it may not be absurd at all to entertain the idea that Jesus may have come to India and even to Ladakh.

Notovich’s story intrigued me, so I decided to visit Hemis Monastery to see if I could get verification. The monastery was very old, in a secluded valley, well maintained and the monks were friendly and accommodating. When asking the monks if they had any books, records or information about the Christian messiah (Issa/Jesus) ever having come to Hemis to study Buddhism, they looked curiously at each other and laughed. Then a senior monk respectfully and with folded hands replied that many western people have come to Hemis with the same question, but that there are no such books or records in their monastery that could verify the story of Notovich.

It seems Nicolas Notovitch was either a trickster, a man with a wild imagination or both. In any case, I wasn’t able to find suitable proof for Notovitch’s story.

Incidentally, I found out later that shortly after the publication of Notovich’s book in 1894, the head lama of the Hemis Monastery signed a document stating that Notovich’s story was a complete hoax.

But if you are looking for a place to visit, rich in culture and history, with fantastic landscapes and a photographers dream come true — then you definitely should visit Ladakh. And while you are there, have a darshan of the Sindhu River.

[1] #ref1 The first Article of the Constitution of India (1949) states that, “India, that is Bharat, shall be a union of states.” Thus, India and Bharat are equally official short names for the Republic of India. Indians commonly refer to their country as Bharat, India, or Hindustan, depending on the context and language of conversation. This is even printed on their money.