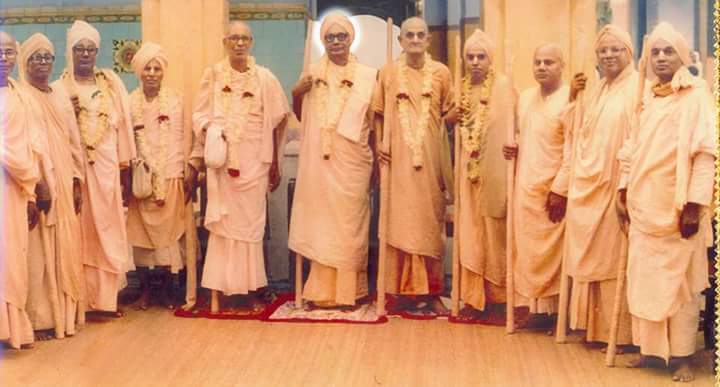 Today is the appearance day of Param-aaradhya (most revered) Srila Gurudeva Bhakti Vedanta Vaman Goswami Maharaja on whose lotus feet I would like to offer my prostrated obeisances.

From this we can understand that Hari and Guru are related to each other as noun is to an adjective. Guru is the only one who is capable of making a jiva sakshat-kar (bring in close proximity) to Hari, hence he is called as Sakshad-hari.

The way Bhagavan is eternal similarly Sri Guru is also eternal. Sri Krishna did not become Bhagavan all of a sudden; Previously he was an ordinary mortal and later attaining Bhagavattva became Bhagavan is also not the case.

While Sri Krishna was in the garbha(womb), the garbha-stuti done by demi-gods is the proof of His Bhagavattva, similarly we can see in Srila Gurupadpadma non attachment towards worldly relationships and deep attachment to serve Hari Guru and Vaishnavas from his infancy. Thus we can see the symptoms of ‘Gurutva’ was manifested within Srila Gurudeva right from the beginning.

Although Guru-tattva is eternal, however from Chaitanya Charitamrita we find the following verse – “amara ajnaya guru haiya, taro ei desa”. The significance of this verse is, the one who is linked to the supreme i.e para brahmani-nisnato can only empower his intimate and accomplished associate to assume the role of a Guru.

Just like we can see in the material world a Phd holder can only confer a Phd degree to a competent recipient, before such degree is conferred to him, he cannot perform the actions reserved for a person holding that degree nor can he proclaim himself as the owner of such powers. Neither can a non-Phd holder confer him with such a degree.

Similarly in the Spiritual world one can assume the role of an Acharya only when empowered by his preceptor and can perform the functions of a Guru on being instructed to do so.

I consider myself fortunate as I obtained a place at the lotus feet of Srila Param Gurudeva Bhakti Prajnana Kesava Goswami Maharaja who was merciful enough to initiate me with harinaam. At that time he was performing his illness-pastimes on this material plane, hence it wasn’t possible to obtain siksha-diksha directly from him.

However being antaryami (knower of one’s inner desires) one day he instructed me – “tumi Vaman Maharaj er seva koro, tumi tar kachay sob pabay.” (You engage in devotional service under the guidance of Vaman Maharaja, from him you will get everything). At that time we used to hear his name as the succeeding Acharya of Gaudiya Vedanta Samiti. Hence I started to consider him also as my Gurupadpadma. And it is at his lotus feet from where I obtained all my spiritual wealth. Hence he is my param-aaradhya Guru Maharaja.

Srila Gurudeva Bhakti Vedanta Vaman Goswami Maharaja lived an exemplary life that every phase of his manifest pastimes is laden with invaluable teachings. In the most quietest of way his actions in the face of any kind of circumstances spoke the loudest about what should be the conduct of a Vaishnava in the line of Srila Prabhupada. In that light we shall discuss the events that lead up to his appointment and thereafter as the Acharya of the Gaudiya Vedanta Samiti.

It is a well known fact that Srila Gurudeva had at the tender age of 9 years taken shelter at the lotus feet of Sri Srila Prabhupada and had started residing at Sri Chaitanya Math. Since that time he had been nourished and nurtured under the tutelage of the then manager of Sri Chaitanya Math, Sri Vinodh Bihari Bramhachari (Srila Bhakti Prajnana Keshav Goswami Maharaja) who adorned him with every siddhanta (established spiritual conclusions) by educating him on Srimad Bhagvad Gita, Vedanta Sutras and other Spiritual text.

From this chain of events I am reminded of a thing. In the 8 maths (preaching centre) established by Srila Madhvacharya the founding Acharya of our Sampradaya, the Acharya selects among his initiated disciples one, who doesn’t have any attachments towards material life and has great propensity to absorb the teachings of the shastras, and keeps him in his custody right from his childhood.

And keeping him under his subservience he engages the child in rendering every kinds of service and imparting every kind of knowledge with the goal of establishing him in both acchar and vichaar as the succeeding Acharya. By God’s divine plan Srila Kesava Goswami Maharaja similarly nourished and nurtured him both materially and spiritually.

From his childhood Srila Kesava Goswami maharaj saw in that boy detachment towards all material relationships. His parents came to the math numerous times on various pretexts and tried to lure him back to into the folds of material affection which he had no taste for. He also saw in that boy a great appetite and unparalleled intellect for absorbing and retaining spiritual learnings.

He also observed in the boy a great temperament for rendering service to Guru and Vaishnavas, hence he named him as ‘Sajjan Sevak’ (One who renders service to vaishnavas). These are the qualifications of an Acharya that he marked in that boy right from the beginning.

Srila Gurudeva (Srila Vaman Goswami Maharaja) was of a very modest and humble nature, he was extremely intelligent, having profound complying nature, and was extremely competent in rendering every kind of of Seva (From the kitchen, temple, press and even the toilets). He was very conversant with the shastras and could quote thousand slokas from different sources, hence Srila Kesava Goswami Maharaja declared him publicly as the ‘Living dictionary’ of Gaudiya Vedanta Samiti. He was considered unparalleled in the Vaishnava community as a thesaurus of Gaudiya Siddhanta.

One day while operating the press his hand was caught in the machine and one of his fingers were also severed. Srila Kesava Goswami Maharaj took him to the hospital and cried inconsolably. When Srila vaman Goswami Maharaja asked him ‘Gurudeva I am fine, why are you crying ?’ , he replied ‘You will know when you become the father of a child’.

Although Srila Kesava Goswami Maharaja had selected in his mind for the role of succeeding him as the Acharya of the GVS, his eldest and most accomplished disciple, he also weighed upon the social considerations. From a social standpoint Srila Kesava Goswami Maharaj wanted to put to test his choice and at the same time check if there were anyone who considered themselves in contention so he took a number of steps.

Firstly he arranged for voting to be done. In this regard he chose upon 100 prudent and judicious people. Among them were prominent renunciate and householder disciples of Srila BhaktiSiddhanta Saraswati Prabhupada, prominent renunciate and householder disciples of other maths which had maintained close proximity to the affairs of the Gaudiya Vedanta Samiti, and his own prominent disciples. In this way 100 people were chosen to vote upon who would be the most appropriate person to succeed Srila Kesava Goswami Maharaja. Among the 100 votes registered nearly 96 votes were cast for Srila Bhakti Vedanta Vaman Goswami Maharaja.

Then he called upon Srila Bhakti Vedanta Narayan Maharaja and he too expressed similar opinion. Finally he called upon Srila Bhakti Vedanta Vaman Goswami Maharaja. What ensued in the room no one knows but Srila Trivikrama Maharaja said they could hear Srila Vaman Maharaja cry profusely. It was like no one wanted to bear the cross. But it was the unique way of Srila Kesava Maharaja to not only pass the mantle to his most accomplished disciple but also pass it after building consensus on their own volition.

Srila Gurudeva Bhakti Vedanta Vaman Goswami Maharaja was blessed not only by his Spiritual Master but also by most other senior disciples of Srila Prabhupada who showered him with their affectionate blessings for his humble nature, sweet spokenness, amani-manada bhava (One who himself does not desire respect but gives respect to others), proficiency over all shastras(Spiritual texts) and the ability to maintain complete harmony between every aspect he dealt with.

One such shower of blessing appeared on the 8th issue of the Gaudiya Patrika by Sri Bhakti Turjyaswami Maharaja (disciple of BhaktiSiddhanta Saraswati Prabhupada) and was published on his request by Srila Bhakti Prajnana Kesava Goswami Maharaja.

The excerpts of this article is as follows –

(Although you are young, your understanding reveals great wisdom. You are untouched by pride and are always enthusiastic to render devotional service.

You are not afflicted/wearied even from bodily sufferings and without any perturbance on your face you engage in service to your spiritual master.

One who is engaged in rendering service is unwavered from his vow to serve free from the dictates of the body and the mind. By such behavior you have taught us this fundamental truth.

You perform your service silently free from the desire of prestige. You are a very learned Sanyasi although you are very young.)

These verses offer us just a glimpse of the love and affection that senior vaishnavas had for Srila Gurudeva.

So after having weighed upon every consideration Srila Kesava Goswami Maharaja made public his decision that Srila Bhakti Vedanta Vaman Goswami Maharaja would lead the Gaudiya Vedanta Samiti in all its affairs.

Watch, listen but never open your mouth.You have eyes, see; you have ears, listen;But you have mouth, don’t speak!!!

The significance of the advice was that the illusionary forces of nature would in its different veils confront him and the Samiti with vile criticism, but irrespective of whatever the circumstances are he advised him to be tolerant.

After assuming the role of Acharya, Srila Gurudeva always ensured that his god-brothers were given utmost respect. Through his words and actions he never used to reveal his own glory that was latently manifested within him. He was ever engaged in living a life of subservience and in the line with the words spoken by Hari, Guru and Vaishnavas.

Following the instructions given to him by his Gurudeva, in his life he has on numerous occasions endured and is still enduring many a slander without any resistance. He is the living example of the verse ‘taror api sahisnuna’.

Infact his exemplary life itself is a personification of all the instructions given by the shastras. In one of his letters he once wrote

“All the instructions in the shastras have been directed only for me.
If you are mine, they are for you too.”

It is my deep misfortune that although I have spent so many years in close proximity to him I could not obtain the qualification to be able to say Gurudev I am yours. The gap between my actions and the instructions of Hari, Guru and Vaishnavas is so wide that it cannot be bridged by my solitary efforts. Today I pray unto your lotus feet Gurudeva to bridge this gap with your causeless mercy and hope that one day strengthened with your strength I can say Gurudev you have always said

“All the instructions in the shastras have been directed only for me (here me refers Gurudeva). But I am yours, so they are for me too.”

With this prayer I would bring my speech to an end. May Srila Gurudeva listen to our prayers and grace us with his mercy.