When Srila Gopal Bhatta Goswami was visiting the pilgrimage centres of northern India, he found a Salagrama Sila on the banks of the Gandaki River. He took the worshipable stone and carried with him wherever he went, treating Sri Shalagram as Sri Vrajendranandan Krishna Himself. One day he thought that he would like to worship the Lord in a deity form so that he could expand his service.

On the very next day, he found that the Salagrama Sila had transformed into Sri Radha Raman Ji to fulfill the wish of his devotee.

The pastimes is also told in the following way. It is said that Srila Gopal Bhatta Goswami used to daily worship twelve Salagramas.

He developed a desire to serve the Lord in the form of a deity, thinking that in this way he would be able to worship him in a much better way.

The Lord within his heart knew his feelings and through a rich merchant had many beautiful items used in the worship of the deity, such as ornaments and clothes, sent to him.

Sri Gopal Bhatt began to worry that all these beautiful objects would be wasted because there was no way that he could use them unless he had a deity in human form.

That night, he put the Salagramas to rest and in the morning he saw that one of them had been transformed into the Radha Ramana deity. 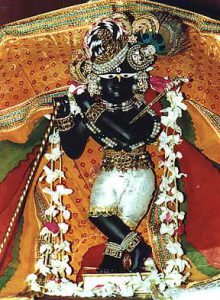 When Sri Rupa Goswami and Sri Sanatan Goswami heard that Sri Krishna had so mercifully appeared to Sri Gopal Bhatt Goswami, they immediately came with the other devotees for darshan, and when they saw him, they were ecstatic with love.

The annual festival commemorating Lord Radha Ramana’s appearance, when he is bathed publicly, takes place on the full moon day of Vaishakh. The Radha Ramana Ji temple is considered one of the most important in Vrindavan.

Nothing is impossible for Sri Krishna, He is present everywhere and ready to even manifest Himself to His pure devotee, Sri Gopal Bhatta Goswami.