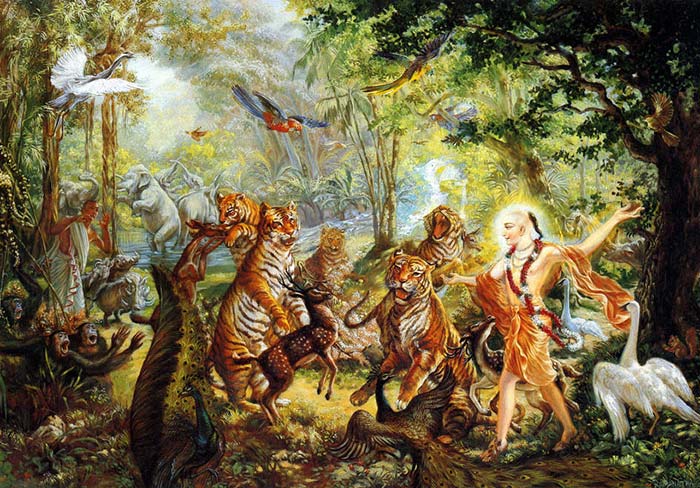 When we pronounce ‘hole’ in English, the listener may not understand whether the speaker meant ‘hole’ or ‘whole’. Both carry a totally different effect. However the pronunciation is almost similar. 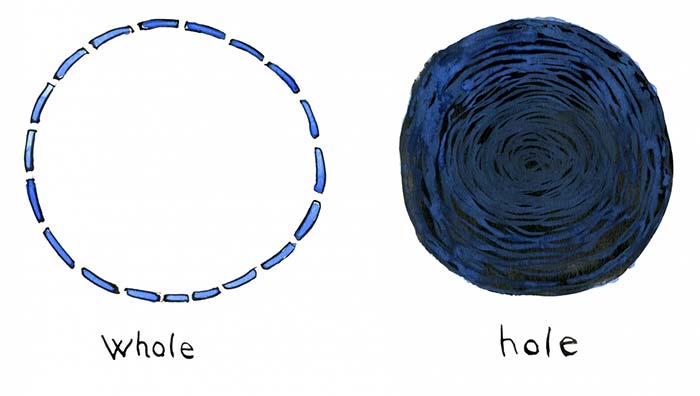 Due to limited potency of our ears and mind, we may not be able to make out the difference similar to our failure of differentiating between ‘hole’ and ‘whole’ immediately.

What is the difference between material and transcendental sound?

Supreme Lord Sri Chaitanya Mahaprabhu has said in Sri Shikshashtakam, ‘prati-padam purnamritasvadanam.” This means at every step in the utterance of the holy Name or Mahamantra, complete transcendental ambrosia is tasted. As Bhagavan is Transcendental, so is His Name.

By chanting the transcendetal holy Name of Bhagavan, one can get sevenfold principal attainments— all attainments. Initially, “Ceto Darpan Marjanam” — cleansing of the mind which is compared with mirror. Sankirtan means to chant correctly and completely. Our mind has lot of sanskaras because of previous births. That is dust, which requires cleansing.

There is no material barrier between Name God and Named God. ‘Nama cintamanih Krishnas caitanya-rasa-vigrahah’— Padma Purana. The Holy Name is Cintamani, which signifies Name can fulfill all desires, but we should not have mundane desires while doing it.

The holy Name if chanted under the guidance of pure devotees of Bhagavan will begin purifying the mind. As the process of cleansing of mind will begin, worldly/material thoughts will begin to vanquish.

This will be followed by the extinguishment of forest fire of cycles of births and deaths and threefold affliction. By the continuous chanting of Mahamantra we will attain eternal welfare, i.e., appearance of Supreme Lord, Who is All-good.

Then the realization of true self and relation with the Supreme Lord will descend on the chanter. After that, with that relation, when one chants the holy Name, he will be immersed in the ocean of bliss and then, at every step he will have the taste of transcendental ambrosia and lastly, there will be complete purification of the body mind and soul.

Can transcencental sound be perceived by material instruments?

One can question whether this may happen or not? My Gurudeva, Srila Bhakti Dayita Madhav Goswami Maharaj had been to the laboratory of the great world famous Noble Prize winner Indian scientist Dr. C. V. Raman to invite him to preside over a function on the occasion of Sri Krishna Janmashtami at Sri Gaudiya Math, Bagh Bazar, Calcutta. Dr. C. V.

Raman refused to accept the invitation on the ground that Sri Krishna was fictitious and He had got no desire to spoil his valuable time for such function. Dr. Raman said if Maharaj could show Krishna to him, he would go to attend the function, otherwise not, that which could not be comprehended by observation and experiment, he had got no aptitude to spare his time for that.

Northern portion of that laboratory was totally closed by wall. The whole North-Calcutta was behind that wall. Maharaj asked him, “I am unable to see anything beyond this wall. If I say ‘there is nothing outside this wall’, will it be correct?”

Dr. Raman said, “I can see through my instruments.”

Dr. Raman said, “I will not give my attention to anything that is not within my sense-experience. Can you show me your God?”

Maharaj then said, “If your students say to you, they will study your scientific findings only if you make them realized first, then what would you say?”

Dr. Raman said, “No, they are to take my process through which I have realized the truth.”

Maharaj said, “If this is true for you and your scientific knowledge, can the seers of ancient India not say exactly the same thing? Follow their process and see whether you experience God’s existence or not.”

So, would you begin chanting the holy Name of Sri Bhagavan so as to become ever blissful? Decision is yours.

Only transcendental sound can elevate us to the spiritual platform, and free us from the miseries of this material world. We hoped that you enjoyed this article.