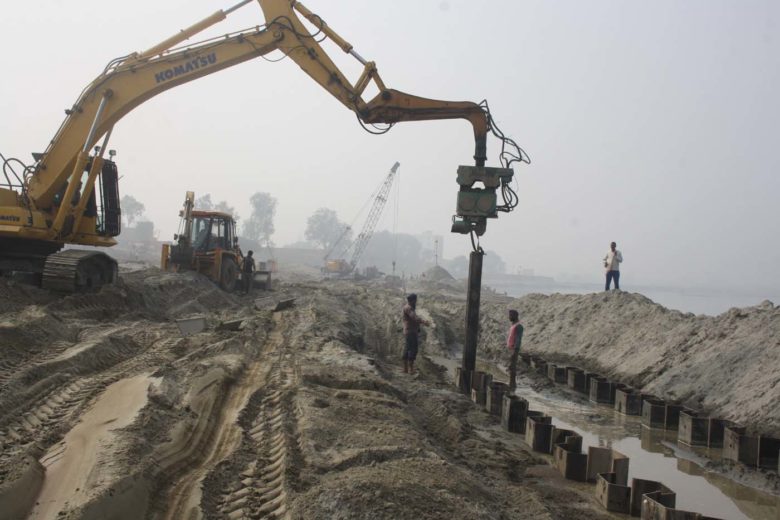 The National Green Tribunal stays the entire Riverfront Development Project in Vrindavan on Wednesday. While hearing the case on an urgent basis on the petitioner’s request, the Green Court asked the Government Counsel to submit that they would not carry out any construction activity on the river bed in Vrindavan till the next date of hearing, which was fixed on 20th December.

The tribunal also directed the respondents in this case to file their replies within two weeks. The NGT on November 1 had issued notices to the Union Ministry of environment, forests and climate change, Union Ministry of Water Resources, several UP Government agencies and the Archaeological Survey of India on a petition alleging illegal construction on the river bed for building new ghats and laying sewage pipeline on the Yamuna bed.

Akash Vashishtha, petitioner in the case, who is also coordinator of Alliance for Culture and Environment (ACE), a forum working for the conservation of environment and natural heritage, had stated in his plea that the government agencies, instead of complying with the earlier orders of the tribunal which sought demolition of illegal structures on the floodplain, had brazenly started construction in violation of norms.

Vashishtha has opposed the state government’s proposed ‘River Front Development Project’ which aims to build new cemented Ghats in front of the ancient heritage ghats, and beyond the illegal road, which was raised after burying the magnificent ghats under the debris. Moreover, he also challenged the idea of laying sewer line, inside Yamuna bed. The government was constructing an interceptor drain, which would run parallel to the expanded riverfront and transport sewage from the Kosi canal and 18 different drains running through Vrindavan before eventually releasing the same without any treatment into the river.

He said that such an activity would cause immense damage to the environment. It should be noted that the Allahabad High court had stayed the laying of sewer line inside the river on 20th October. The High Court had also directed that no damage should be done to the ancient ghats. Since the ban was on laying the sewer line in the Yamuna bed, the irrigation department continued to carry on the other component of the project. Meanwhile, the sheet piles were inserted by the heavy machines, into the earth on the Yamuna bed.

Alarmed by the situation, the petitioner requested the Green Court for an urgent hearing, in which the court directed to stop the entire project.