More than 70,000 sign petition to cease use of tallow in production process, saying it is unacceptable to vegans and vegetarians

A row has broken out over the use of animal fat in the new plastic £5 note, with calls from some vegans and vegetarians for the production process to be changed.

A petition has been launched calling for the use of tallow, a substance made from animal fat, in the banknotes to be stopped. The petition has attracted more than 70,000 supporters so far and will be delivered to the Bank of England.

The petition says: “The new £5 notes contain animal fat in the form of tallow. This is unacceptable to millions of vegans and vegetarians in the UK. We demand that you cease to use animal products in the production of currency that we have to use.”

The Bank of England declined to comment on the petition. A spokeswoman said the issue was the polymer that the new £5 notes are printed on, which contains tallow. The central bank buys polymer pellets from an external company, Innovia Security, which supplies banknote substrate for 80 denominations in 24 countries.

The issue came to light when the Bank responded to a question on Twitter, confirming that the polymer pellets contained traces of tallow.

The issue caused a storm on Twitter, where people voiced their protest on behalf of vegans, vegetarians and some religious groups. Tallow is also used to make household items such as candles and soap.

The new plastic fivers entered circulation in September and are much hardier than paper money – they can survive being drenched in red wine or a spin in the washing machine. However, they shrink and melt at temperatures above 120C, so can be damaged by an iron. They are hard to tear – but if they do suffer a nick they then tear easily. The Bank has also had to admit that brand new polymer notes can sometimes stick together.

Plastic money is used in many other countries, some of which have switched completely to polymer banknotes, such as Australia, Canada, Romania and Vietnam. 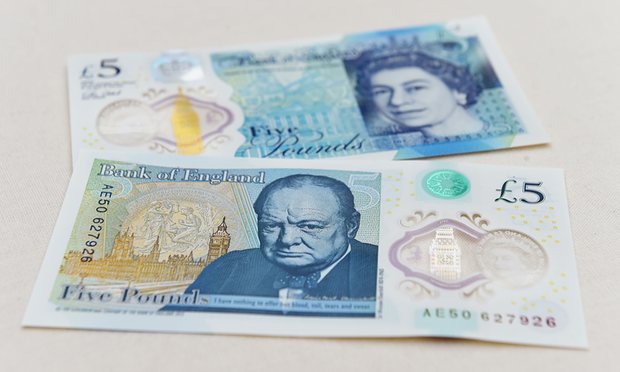