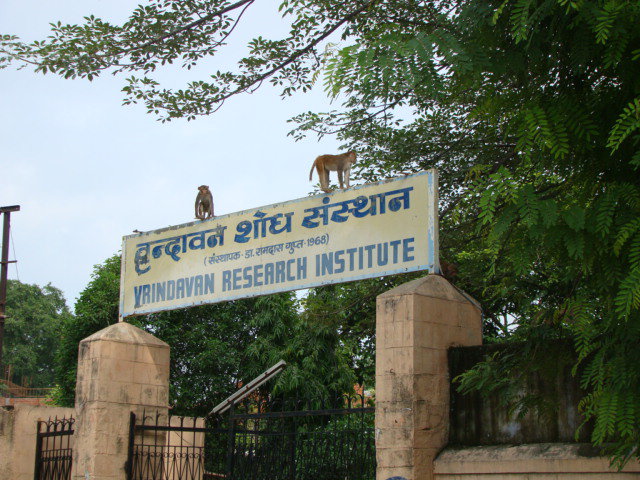 heirmanhousands of devotees visit the ISKCON temple in Vrindavan every day, but out of them, very few even notice a large gate just a few metres away with the name “Vrindavan Research Institute” written on the top. Even less people know that inside the library there lies the most important legacy of the Goswamis of Vrindavan – their original manuscripts.

Founded in 1968 by Dr. Ramdas Gupta, a professor of the school of Oriental and African Studies, University of London, the Vrindavan Research Institute at first seemed like a beautiful dream becoming true. Dr. Gupta won the trust of the local residents and convinced many of them to donate whatever manuscripts they had to form a single repository which would be maintained by the government of India under the promise that they would be properly cared for, classified and made available for scholars. In this way, he succeeded in receiving even the whole library of the Radha-Damodara Temple, which belonged to Srila Jiva Goswami and contains several autographed manuscripts written in his, Rupa’s, Sanatana’s and other Goswamis’ own hand.

The early years proved to be very fruitful and a lot of development was done under the management of Dr. Gupta. Manuscripts in poor condition were rescued from private collections where they were deteriorating due to negligence; descriptive catalogues started to be prepared; and scholars from India and abroad were easily given access to texts and provided photocopies according to their needs.

Unfortunately, thingschanged and the dream gradually turned into a nightmare for those who consider the literary heritage of the Goswamis to be as worshippable as the deities installed by them. Genuine scholars like Dr. Gupta and the librarian, Mr. Gopal Ghosh, slowly left and were replaced by individuals who were clueless about anything related to research and passed a number of rules to make sure that no one gets the chance to even see the library.

A Goswami from the Radha-Damodara temple laments, “We donated Jiva Goswami’s personal manuscript library to the VRI, which no money in the world can pay for, but now even our own people cannot access it anymore. The local Vaishnava scholars are very much dissatisfied with the present management.”

The same feeling is also shared by all those who donated their collections to them. “Our family had many scholars who wrote important texts, and we thought that the VRI would be a safe place to preserve the manuscripts,” says Pandit Dwarkesh, “Yet years after we donated everything to them, when I requested a copy of a text written by my grand-father, they refused.”

Another similar experience was told by Pandit Vrindavan Bihari Goswami, “I not only gave my collection of manuscripts to the VRI but also spent 25 years of my life working there. I wished to publish a manuscript which was donated by me, but they did not even allow me to copy it!”

The situation has become very well-known all over Vrindavan, and nowadays no one in sound mind would consider donating anything to the VRI any more. Dinesh Chandra Sharma is among those who still prefer to keep his family manuscripts at home. He comments, “My father donated a large number of manuscripts to the VRI. Yet we often hear that they are not helping the research scholars who go there, so I see no point in donating anything else to them.”

Foreign research scholars don’t have even a bit of better luck there either. G. Castro, a PhD candidate at Washington University speaks about her experience in the library, “I asked to see the catalogue of the printed books in the library, and the assistant told me that they don’t have one. When I told her the name of a book I was looking for, she promptly replied that they don’t have it, as if she knew all the titles by heart. I wondered which kind of library is this.”

G. Hansen, a student from Copenhagen University working on a critical edition of Rupa Goswami’s Krsna-janma-tithi-vidhi, says, “I collected manuscripts copies from different libraries in India without any trouble. Yet in the VRI they allowed me to copy only two pages. Imagine if there were only one manuscript. There would be no research work at all if it depended on them. They call themselves a ‘research institute’ but are actually simply inviting the end of research and publication.”

Demian Martins came from South America and is doing a deep research work on Gaudiya manuscripts, but his project is also stuck, “For years I’ve been going to the VRI again and again, and the only thing I am shown is the door. Recently the librarian, Brajbhushan Chaturvedi, shouted to my face that he won’t show me any manuscript. I mentioned that I would have to report this to the government authorities and he told me to go ahead, with full confidence that nobody cares.”

Another foreign scholar shared his impression about the VRI, “For more than ten years research scholars are not welcome at all to do any serious research work at VRI. That can’t be called a research institute anymore. It is a hoax to squander public money.”

The VRI is not only not rendering any service to the community, but its administration is also seriously implicated in fraud scandals. In 2013, Mr. Suresh Chandra Sharma, an advocate in charge of the local branch of the Uttar Pradesh Anti-corruption Bureau, submitted to the central goverment an extensive report of a fraud case of many crores of rupees in the past few years.

Despite being an internationally acclaimed scholar, and a Mahant in the Vrindavan renunciate society, the director of the Jiva Institute Dr. Satya Nayarana Dasa himself is also not allowed to copy anything from the VRI. He speaks out, “I remember when Mr. Gopal Ghosh was the librarian at VRI. He would welcome me and show me whatever book or manuscript I wanted. But now it is only dream. Many scholars come to Jiva Institute and complain about the non-cooperative mood at VRI. I feel very embarrassed.”

Concerned about the present situation and looking for the welfare and interests of the Vaishnavas and scholars who come to Vrindavan to study and research, Dr. Dasa took the initiative of taking the matter in his hands and submit the following report to the Prime Minister of India and several other government authorities.

The Jiva Institute for Vedic Studies in Vrindavan has a research department with both Indian and foreign scholars working in different projects based on original Sanskrit manuscripts. They visit research centres all over India and the only place where they face difficulties is the Vrindavan Research Institute, which according to them is by far the worst manuscript library they have seen in the country.

Here are some of the problems posed:

Scholars are not shown manuscripts under any possible excuse, such as ‘it could not be found,’ ‘it is in the conservation section,’ ‘the staff is on leave,’ etc. This goes on continuously year after year.

The library in charge, Brajbhushan Chaturvedi, has no qualification at all in Sanskrit or manuscriptology, helps the visiting scholars in nothing and avoids showing anything to them at any cost.

The present staff are ill-mannered, callous and openly non-cooperative with visiting scholars.

Despite their claims of having no sufficient staff, the workers in the library can be seen sitting idly on any day, at any time, besides having no fixed timing for arriving or leaving.
Despite being named ‘research institute,’ they have no research scholars and no functional research committee.

There are no Sanskrit experts on site to assist research scholars or give even basic information about the manuscript collection and its contents.

The previous administration have passed a rule that no one should be allowed to copy more than two pages per manuscript, and they claim that this is a government law, although no other manuscript library in India refuses to give copies of manuscripts to legitimate scholars.

They are taking no steps to publish their manuscripts, and proposals from others are not only not welcome but are flatly rejected.

Lakhs of rupees were spentto make microfilms of manuscripts and documents from private repositories in the area, but there is no projector to consult them.

Lakhs of rupees were spent to digitize their manuscript collection, but there are no PCs available for scholars to consult the scans.

No new catalogue has been published since many years, while many thousands of manuscripts are lying unsorted and can’t be consulted.

They spend years without producing substantialand quality research publications.
They have many bundles of documents which are unsorted and can’t be consulted.

Almost 50 years have passed since they opened, yet they still don’t have a catalogue of all the printed books in their library, what to speak of a digitized version that can be viewed online.

The contract with the donors is not being honoured and they are also being denied access and copies of the very manuscripts donated by them. Every donor deeply regrets having donated their manuscripts to this institute.

To make it short, the present staff of the Vrindavan Research Institute has no knowledge, experience or interest in anything related to research in Sanskrit manuscripts and take for granted that its manuscript collection is a mere part of their museum to be preserved and kept away from everyone. It is also remarkable that in November of 2013, Mr. Suresh Chandra Sharma from the local U.P. Anti-corruption Bureau submitted a 40 page dossier reporting a fraud case of several crores of rupees in the said institute, but no action has been taken.

I humbly request you to look into the matter to find a possible solution to the present difficulties mentioned above so that we can have an atmosphere congenial for research work here in Vrindavan.

Director of the Jiva Institute