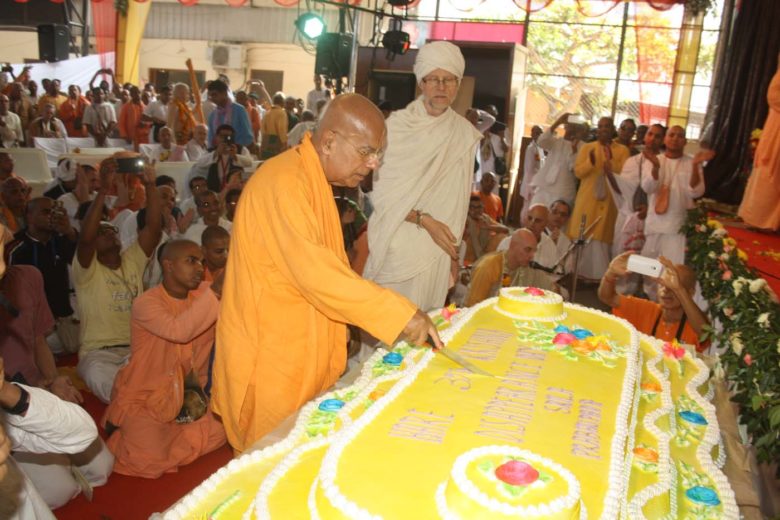 Iskcon’s founder Shrila A.C. Bhaktivedanta Prabhupada was remembered on his disappearance day. This day was celebrated in a grand way at Krishna Balaram Mandir, on Friday. Around ten thousand devotees from India and abroad participated in the celebration.

Special programs were held at Krishna Balaram Mandir in his honor. Panchamrita Abhisek was performed to the deity of Prabhupada. Then he was offered aarati and pushpanjali at his Samadhi.

A recorded video of his lecture was played for his devotees. Some of the assembled devotees showed him their respect and love by offering flower garlands and circumambulating his Samadhi. Next there was kirtan, glorification and remembrance of his pastimes. His disciples shared their personal experience with Prabhupada. There was feast prasadam for devotees at Gaushala.

His disciples recounted the disappearance pastimes of His Divine Grace Prabhupada. They said that although Prabhupada was no longer physically present on the earth, but he was very much present in this world through his mission of spreading Krishna Consciousness. He is present in the form of the books authored by him and his instructions given to his followers.

A huge cake weighing 150 kg was cut on this occasion by Iskcon’s GBC member and senior Acharya Shri Gopal Krishna Goswami. Shrila Prabhupada departed from this world on November 14, 1977 in Vrindavan. The departure of Vaishnava Acharya gives cause of jubilation because they return to their eternal service at Krishna’s lotus feet in Goloka Vrindavan, the spiritual world.

The celebration concluded with the grand feast organized in afternoon at Iskcon Gaushala.