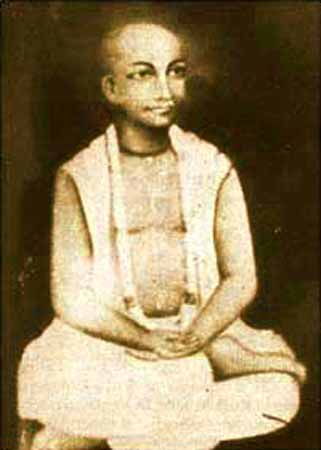 Srila Lokanatha Goswami is considered to be a personal associate of Sri Chaitanya Mahaprabhu. Indeed, he was the first Gaudiya Vaishnava to be instructed by the Lord to go to Vrindavan, along with Srila Bhugarbha Goswami. Lokanatha set the standard for worship in a spirit of renunciation while in the dham. He was a viviktanandi Vaishnava, i.e., he took pleasure in worshiping the Lord in solitude.

In this spirit, he had vowed not to take any disciples. Srila Narottam Das too made a vow — to take diksha from no one other than Srila Lokanatha. Though he was the son of a king, Srila Narottam’s desire to receive Srila Lokanatha’s mercy was so great that he went in the middle of every night to clean the place he used as a toilet. He would also leave fine earth and water for him to clean himself afterward. This is described as follows in the Prema-vilasa:

He went to the place where the Goswami performed his bodily functions and did a special job of cleaning it. He sifted the earth to make fine, clean earth with which Srila Lokanatha could clean his hands. He did this as a regular service. He would hide the broom of coconut leaves in the earth and each night take them out to sweep the place, his heart filled with joy. He considered himself fortunate and his body worthwhile. He would hold the broom to his chest, repeating, “This is the power that will help me attain my lord’s lotus feet.” As he said these words, he cried and torrents of tears washed over his chest.

Srila Lokanatha was astonished to see that the place was daily being kept clean. He became curious to find out who it was and so, one evening, he went and hid in the jungle, chanting the holy Name the entire night in wait for the anonymous benefactor.

At midnight, he saw someone engaged in cleaning the place and asked him who he was. When he found out that Srila Narottam, the son of a king, was doing such a filthy task, he felt embarrassed and told him to desist. Srila Narottam, however, immediately fell at Srila Lokanatha’s feet and began to cry.

When Srila Lokanatha saw Srila Narottam’s humility and pain, his resolve softened and he gave him Diksha.

Thus Srila Narottam gave an outstanding example to the world of how one should behave in the service of one’s spiritual master.