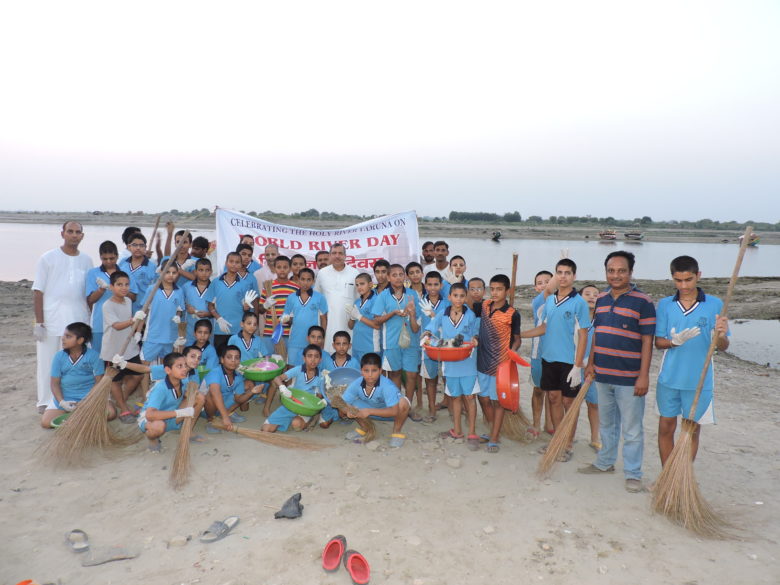 The students and river enthusiasts of Vrindavan gathered on the bank of Yamuna at the Imli Tala Ghats to celebrate the World River Day on Sunday. River activists joined hands with the students of the Bhaktivedanta Gurukula to clean up the stream of the Yamuna and its bank at the Imlita Ghat.

The Gurukul students cleaned the leafplates, plastics etc. which were flowing on the stream of Yamuna. They also cleaned up the river bank by picking up the plastic and other wastes. The students were supported by the volunteers of Friends of Vrindavan in the ‘Yamuna Cleaning Activity’.

While sharing his experiences on how he has been fighting for the cause of Yamuna, Shri Gopeshwar Nath Chaturvedi said, “ The problem with the Yamuna began when people started to consider it as a water body. Yamuna was not polluted when people adored it as a mother.”

He further said, “The ‘shram daan’ being performed by the students is not a mere activity, but it is the service to the mother. Our active involvement will ensure the health of Yamuna in the times to come.”

Introducing the World River Day to the stuents, the Director of Friends of Vrindavan said, “ World Rivers Day is a celebration of the world’s waterways. It highlights the many values of rivers and strives to increase public awareness and encourage imporved stewardship of the rivers around the world.”

The event was organized by Friends of Vrindavan as a part of the Eco-School activity. It should be noted that Bhaktivedanta Gurukula is the Eco-school partner of FoV and received the first Vrindavan Green Award in 2013, under the category of the Green School.