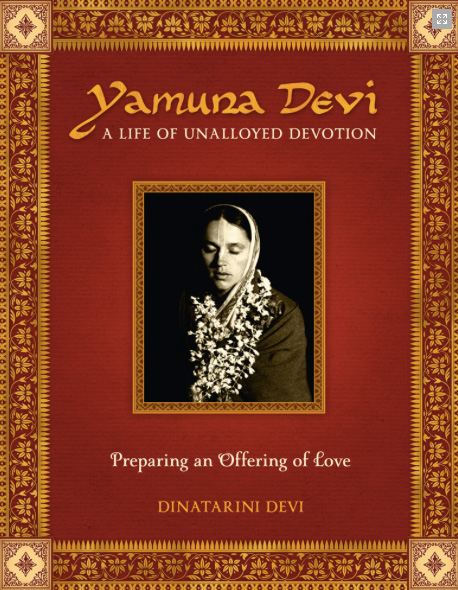 The attractive boxed calligraphic case housing this weighty two-volume biography feels like it might contain a stash of gold bars. However Dinatarine devi’s elaborate 1000+ page chronicle of Yamuna devi’s life is even more valuable than gold. From the charming account of her birth as Joan Campanella in a remote Montana mining town to the poignant details of her saintly demise, this story of a rare devotee who unswervingly imbibed and promulgated ancient India’s revered bhakti yoga tradition amidst modern society is a compelling and life-changing read.

Indeed, the exquisitely crafted pages of this masterful work embellished with filigree and artistic border designs presents much more than insightful memoirs from Yamuna devi’s personal journals, recollections of friends and family, as well as an expert narrative of her sanctified journey, for this colorful composition also captures a magical slice in time from America’s cultural revolution when youthful seekers were searching for genuine spiritual gurus and philosophy. Initiated on March 7, 1967 in San Francisco by His Divine Grace A.C. Bhaktivedanta Swami Prabhupada, Yamuna not only grew up in the newly formed International Society for Krishna Consciousness (ISKCON) but also catalyzed significant media and popular exposure for the fledgling Hare Krishna Movement through lead recordings with George Harrison at Apple Studios, key meetings with international dignitaries such as Indira Gandhi and her award-winning vegetarian cookbooks.

Since Yamuna was a very dear disciple of Swami Prabhupada, this book offers priceless vignettes of both herself and her charismatic Guru, along with an enchanted band of starry-eyed spiritual revolutionaries who inaugurated a worldwide explosion of love and devotion for the Supreme Lord Krishna. It also portrays the amazing disparity between a woman of bold conviction who pioneered the infrastructure for Swami Prabhupada’s Bhakti Yoga sect amidst male-centric societies, both in India and the West. Although Yamuna endured endless physical and mental austerities during her travels throughout India, her greatest triumph was to maintain full surrender to her guru while simultaneously managing challenging projects amidst extreme social pressure from her male-bodied peers. What emerges is victory over seemingly insurmountable odds, crowned by glorious forgiveness of and selfless love for the very ones who tried to sabotage her divine odyssey.

This excellent personal history depicts the depth of Yamuna’s devi’s soulful absorption in the loving mellows of devotion juxtaposed against her adroit interactions amidst contemporary society. Even though never ordained as an initiating guru herself, it is obvious that she was a beloved teacher and guide for countless persons of diverse ages, genders and dispositions throughout the globe.