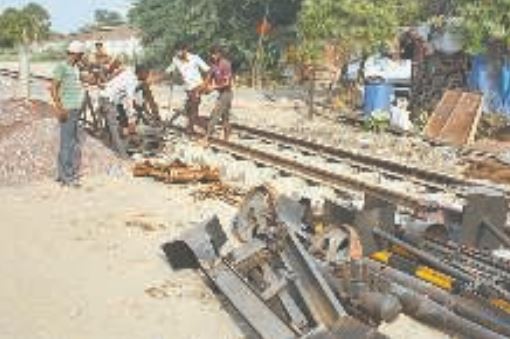 Rail department is working hard to get the Railbus service resumed between Mathura and Vrindavan, which stopped one and half years back. The department is fixing the railway tracks after which barricades will be installed on road-crossings, post which service will start again.

Railway barricades aregetting installed at three places between Mathura and Vrindavan viz. Shri Krishna Janmbhoomi railway line, masani road and Gandhi marg in Vrindavan. The installation work for the forst two places is in the final phase and will be completed soon.

The Railbus service between Mathuraand Vrindavan stopped on July 23 2015 due to technical faults, which increased trouble for daily passengers as well as for visitors. Since then the sants, elderly people and prominent personalities of Vrindavan were raising their voice to resume the service as soon as possible. MP Hema Malini also wrote a letter to CM Akhilesh Yadav and Central Railway MinisterSuresh Prabhu so that the service can be restarted.

Soon the railyway department got their instructions and the Railbus was sent to Izzatnagar for repairing. Apart from that, railways have also started to repair the 14kilometres long railway track between Mathur and Vrindavan. Velding and barricade installation work is in full swing these days on the railway track.

Service were halted earlier as well

This is not the first time that the Railbus servces has been stopped. There had been incidents in the past also when the service was stopped for technical faults.

The service first stopped on May 5 2011, but was resumed after repairing. Again on March 28 2014 the service were interrupted for short time. Later, on the services were stopped on May 3 2015 only to start again from July 20 same year. But the service again was stopped after three days on July 23 till date.

Now after the all round efforts, hopes have risen again that the service will begin again soon.