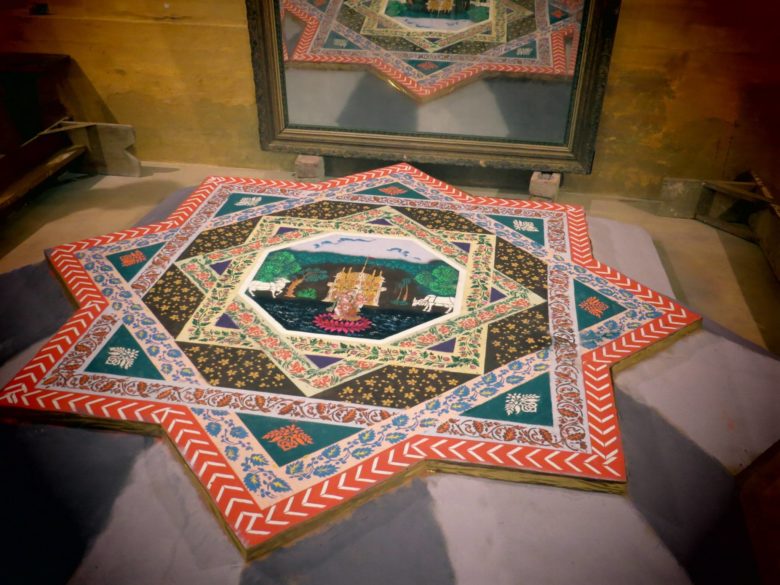 Vraja is the abode of celebrations, which are ceremoniously observed round the year. All the 365 days of the year are engaged with one festival or the other. Even the fortnight long Pitru Paksh, which is considered inauspicious among the Hindus around the world, is celebrated with great fervour as “Sanjhi Mahotsanv”. Once spread over many places of Vraja, this culture is now limited to some ancient temples only.

The Sanjhi making is a significant part of Vraja Culture and tradition. According to Dr. Chandra Prakash Sharma, Smt. Radha Rani and the Gopis used to make Sanjhi with flowers on the way through which Shri Krishna would pass with the cow herd during the dusk. The Gopis welcomed Krishna and the cow herd by making Sanjhi with flowers on His return from grazing the cows.

The temple priests of Mathura and Vrindavan took up the practice of sanjhi in the 17th century, using stencils to create scenes of the pastimes of Krishna and the gopis. Powdered colours are used, either on the floor, a pedestal or floating on water in shallow vessels. Sanjhi is one of the living culture of Vraja being practiced in a few temples of Vraja – Vrindavan.

“Sanjhi Mahotsav” began to be displayed in some ancient temples of Vrindavan with the beginning of the Shraddha paksha. For two weeks this art will be displayed in the temples of Raghunath Bhatt Goswami’s Madan Mohan, Radha Ballabh, Yashodanandan, Radha Raman, Radhika Priya Ballabh, Shah Jahanpurwali mandir. Sanjhi art is prepared in these temple using flowers and paints in urban areas, whereas villagers use cow dung to make art displayed in the temples during this time of the year.

The intricately beautiful sanjhi designs are put on display in the evenings, when they are worshipped. The temple musicians also lead devotees in singing special sanjhi bhajans while dancers dressed as gopis perform. Sanjhi is said to have derived from the word sanjh meaning evening, and the word is related to other terms used for decorative traditions, including sajja, shringar and sajavat.