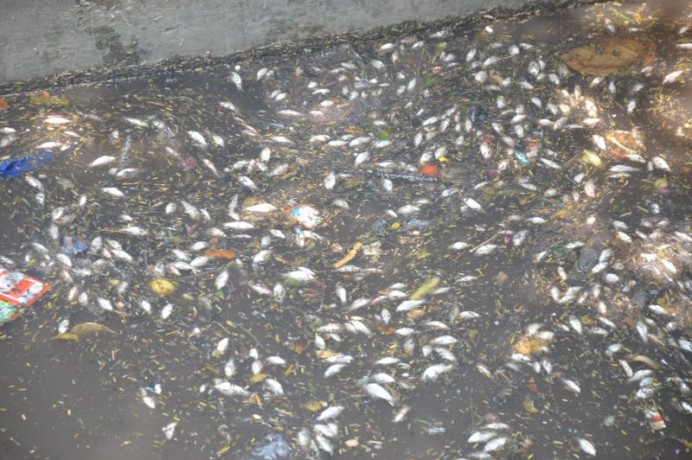 Thousands of fishes were killed on Saturday as pollution reached its peak in Yamuna which also revealed the truancy of Government agencies as well. Chemical from some unknown source got mixed in the river which not even killed thousands of fishes, but also it stinks from miles. Devotees find it hard to even perform daily rituals at ghats due to bad odour.

National Green Tribunal (NGT) has passed many orders to protect the sanctity of the sacred river. But the loose law execution from Pollution Control Board and city administration is making it hard for the lam implementation. Chemical waste is getting disposed in Yamuna openly; whereas sewer treatment plants (STP) and sewage pumping stations (SPS) are almost off most of the times.

SPS at Masani, Daula Maula Ghat and Swami Ghat are not performing to their capacity from the past two days. As a result chemical waste is getting disposed off in Yamuna directly without ant treatment. The chemical which dissolved in the river along with the sewage on Saturday took many aquatic lives apart from raising a foul odour from miles. Riverfront was full of fishes getting chocked to death due to polluted water.

Petitioner at NGT Shri Kanta Nath Chaturvedi saw dead fishes early Sunday morning when he informed the issue to Mr. Ravindra Kumar (ADM Revenue and Nodal Officer for Yamuna work plan). Later on a team of Pollution Control Board also inspected the situation and took water sample for lab testing. Shri Kant Nath Chaturvedi said that unless and until Government won’t be serious for reviving the sacred river, fishes will keep dying due to the pollution from factories.

No oxygen due to chemical solvents lead to death

Shri Ravindra Kumar has already sent a report to the District Magistrate Dr. Nitin Bansal informing him about the incident, and reporting the negligence from the Municipal Corporation and Pollution Control Board. The lab reports have also mentioned lack of oxygen in Yamuna water due to high amount of chemical in it. The report says that these chemical came from chemical waste from the untreated STP water and disolved in river water polluting it. Nodal Officer has requested DM to intervene into the matter and take action against the accused as soon as possible.