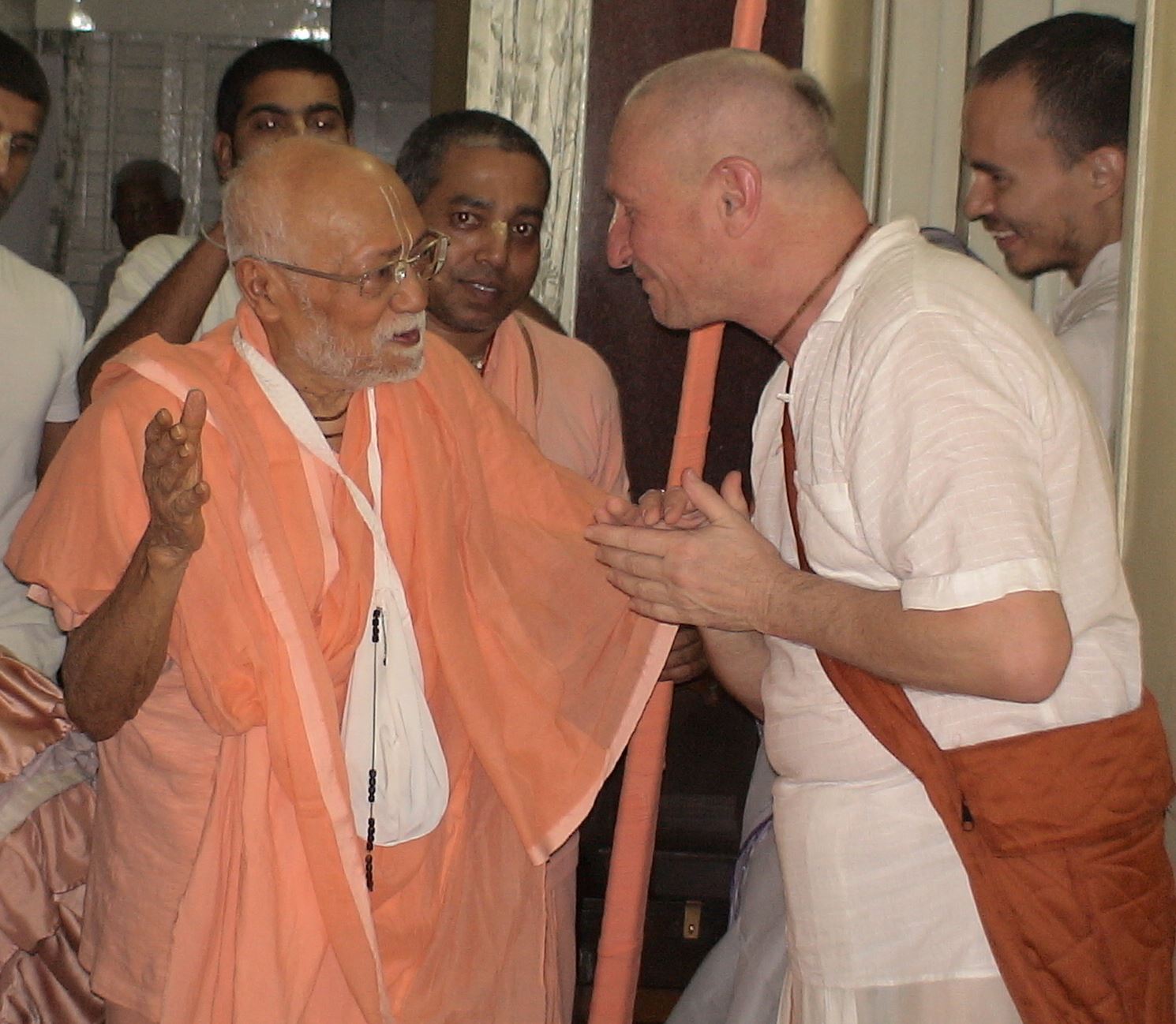 He felt very much satisfied and continued to stay in the association of Srila Puri Maharaj and whenever he came to India he would visit Srila Puri Maharaj and that is when he also met our Srila Gurudev HDG Srila Bhakti Ballabh Tirtha Goswami Maharaj. He said several times that Srila Bhakti Ballabh Tirtha Goswami Maharaj is a magnet with His own extraordinary qualities He attracted everyone and Bindu Madhav Prabhu was not an exception to these. He also got attracted to our Srila Gurudev and soon he started coming to Him frequently because of the love, the care, the attention he got so much that attracted him to Srila Gurudev all the time. Particularly when Srila Gurudev went to the Europe for preaching specifically Bindu Madhav Prabhu’s contribution in taking to various places, organizing different programs, transitory stays, the food, the expenses, finances, bringing the people and keeping contact with them, driving Gurudev to various places. He has done so many things. He helped the preaching of Sree Chaitanya Gaudiya Math or the mission of our Param Gurudev HDG Srila Bhakti Dayita Madhav Goswami Maharaj so much that Gurudev felt him very very close.

Whenever Gurudev went there he would drive Gurudev for several hours. For 2 months he would give up all his material duties and other responsibilities and he used to take Gurudev around to various places. He offered 2 cars in the service of Srila Gurudev and for 2 months all the time he would stay with Srila Gurudev and all the other devotees who were accompanying Srila Gurudev. There was no restriction or narrow-mindedness in him. If you see the photos of him with Srila Gurudev or in the videos, whenever there is kirtan Bindu Madhav Prabhu would play the kartals so intensely for long long hours. He would not get tired at all, like that he had helped. His enthusiasm to propagate Krishna Bhakti to engage personally in Krishna Bhajan is so exemplary. In the year 2011 when Bindu Madhav Prabhu came to India with a book which he translated into French Language. He brought it and gave it to Srila Gurudev even before Srila Gurudev saw that book as soon as He saw Bindu Madhav Prabhu, He immediately embraced him and caressed his back.

So it is the misfortune to loose the company of such a devotee. When the devotees are present we don’t realize or understand their importance. But after they leave then suddenly and slowly we realize what we have missed. Bindu Madhav has a treasure of Srila Gurudev’s pastimes. Those days which we have not seen he has seen. The way in which we have not intimately or closely moved with Srila Gurudev he had done that. He had traveled, driven, he gave Prasad, he ate Gurudev’s Prasad, he sat next to Him, he danced along with Him, he played the Kartals when Srila Gurudev was singing kirtan. So many service opportunities he had got and all of them he had utilized.

After celebrating the Ramanavami Festival and also appearance day of Srila Gurudev this year he left for France. Briefly after that, he got a heart attack and he felt something wrong that he is probably not going to stay for long in this world. He immediately wrote a will where he mentioned that if I were to die my body will be shifted to Goverdhan, my body should be taken to Vrindavan and the final rites should be performed there. If there shall be any problem from the government to transport my body to India then at least my ashes should be offered there. Just see what kind of love and attachment he has got to the holy dham, to the Vaisnavas, very very rare. He has always said that he sees his own Guru inside our Srila Gurudev Srila Bhakti Ballabh Tirtha Goswami Maharaj.