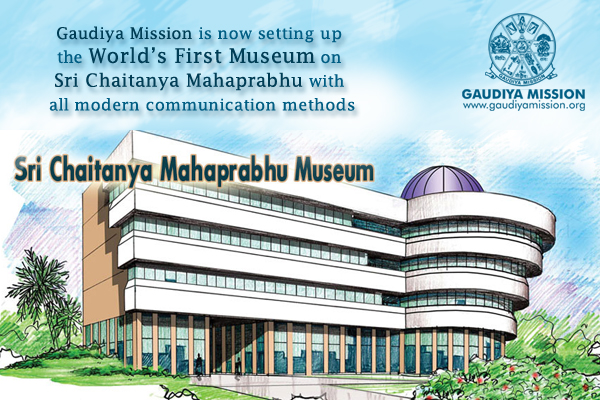 Today a modern 3-story museum is being built in Kolkata – India to glorify Sri Chaitanya Mahaprabhu and contribute to the expansion of His harinama-sankirtan movement worldwide. The initiative is carried out by the Gaudiya Mission, one of the institutions originally established by Srila Bhaktisiddhanta Sarasvati Thakur Prabhupada.

During the celebration of Srila Bhaktivinoda Thakur’s avirbhav mahotsav in 2011, Sripad Bhakti Sundar Sannyasi Maharaj (general secretary of the Gaudiya Mission) felt a deep need in his heart to protect and preserve the spiritual heritage which Srila Thakur and his son Srila Bhaktisiddhanta Sarasvati Thakur Prabhupada had left for the benefit of humanity and future generations.

Deeply moved by this inspiration, Sannyasi Maharaj began researching spiritual museums in India and met with the reality that many religious missions had professional exhibitions open to the public about its history and legacy. Thus, it was concluded that the Gaudiya Vaishnavism of Sri Chaitanya also must have a specific place where not only the works of Srila Bhaktivinoda and Srila Bhaktisiddhanta will presented but also the different lilas of the Golden Avatar, as well as the deep philosophy of acintya bedha abedha tattwa and the global impact of His harinama-sankirtan movement. Thus the idea of establishing a museum for Sri Chaitanya Mahaprabhu was conceived.

After several meetings and reflections the final project came to light and would cost INR 15 Crore, approximately USD 2,250,000. A substantial amount that gradually began to be collected since then. First, the Government of India itself decided to support this noble cause with a donation of Rs 5 Crore, approximately USD 750,000. With the passage of time more donors wanted to be part of building the Museum of Sri Chaitanya and dedicated devotees such as Srimati Manju Mitra (daughter of a recognized member of the Gaudiya Mission) made their donations. The same Sannyasi Maharaj alongside Rishikesh Sripad Maharaj managed to raise INR 1 Crore more. About INR 10 crore of the total 15 could be collected with great effort.

In parallel to the fundraising, an Indian architect based in the USA designed a modern 3-story building plus a ground floor which began to be built near the Bagh Bazaar Gaudiya Math (established by Srila Bhaktisiddhanta Sarasvati Thakur in 1930) and whose bhumi puja was attended by the Honorable President of India Sri Pranab Mukherjee on 16 September 2013. (see opening photo gallery)

Gradually, Sannyasi Maharaj’s original need started expanding increasingly until it became a super project that today is in its final phase of development with more than 90 percent of the structural work completed and interior works in progress.

– A look inside the museum –

The Museum of Sri Chaitanya Mahaprabhu plans to have dioramas, graphics and multimedia displays of the transcendental lilas of Sri Gauranga besides philosophical exhibitions and specialized areas for researchers. Two floors of the building will be dedicated to the figure of Sri Chaitanya while the remaining two will aim to present to the public the legacy of Srila Bhaktivinoda Thakur and Srila Prabhupada Bhaktisiddhanta Sarasvati, respectively. In addition, the building will have a large dome-shaped conference room for seminars and conferences on Gaudiya Vaishnavism.

– A great opportunity to be part of this noble initiative –

The task has not been completed yet and while the Museum of Sri Chaitanya is in its final construction phase the doors are open for those who wish to participate as donors and thus be able to complete the missing INR 5 Crore.

More information about the project: