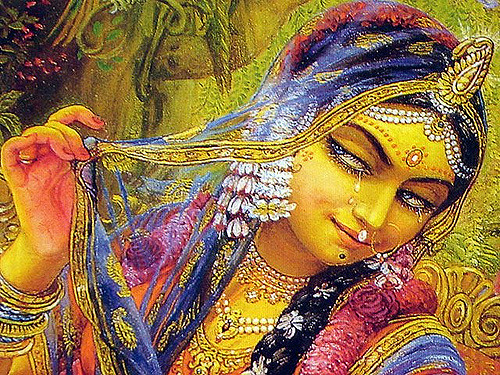 We are told that Radharani was found floating in a lotus. Her father Vrsabhanu Raja, a chief cow keeper, was childless. Suddenly, one day he found in a lake on a lotus a beautiful girl, but with closed eyes. He took Her home. The girl was very beautiful, perfect, but Her eyes were closed.

Vrsabhanu Raja had a friendship with Nanda Maharaj. He was also a chief cowkeeper, and Vrsabhanu Raja had some natural friendship with him. Yasoda heard that her friend Krttika had no child but suddenly found a girl of exquisite beauty who was blind and took her home from a lotus on some lake. She is now bringing Her up. Yasoda went to visit and congratulate Krttika that she at last got a beautiful girl. Yasoda took Krsna with her also. As Yasoda and Krttika were talking, Krsna went up to the girl, and the girl suddenly opened Her eyes and saw first the boy Krsna.

This has been told, that She first opened Her eyes and saw Krsna. This is lila: eternal incidents, events, repeated in a particular way a like drama. One drama is being repeated many times in the eternal quarter. Sometimes the screen is taken away, and it comes to flash in a particular place. So, in the original place, the lila is going on coexistent. All the lilas are subsequent, a succession, and are coexistent. By His will, some glimpse comes to different mundane universes as an exhibition to attract the people for service. So, it occurred in that way, the children’s first union, an interchanging of Their vision.

Afterwards, Vrsabhanu came, and Krttika, the chief queen, began to nurture the baby. Gradually, the girl grew up.

As the moon is supposed to come from the ksiroda-samudra [ocean of milk], so some present geologists are of the opinion that the moon shot forth from the Pacific Ocean. There was an island in some portion of the Pacific and somehow, by some earthquake or some push, like a rocket, it was sent out into the atmosphere and has become moon. Indian mythology is also of similar opinion that the moon has emerged from the ocean of milk So, Vrsabhanudadhi-nava-sasi-lekhe: Srila Rupa Goswami compares the family of Vrsabhanu to the ocean from which the moon of Radharani has sprung up. Such a beautiful comparison: the fortune of Vrsabhanu is compared to the ocean, and from there has sprung up the moon Sri Vrsabhanu Nandini, Sri Radhika.