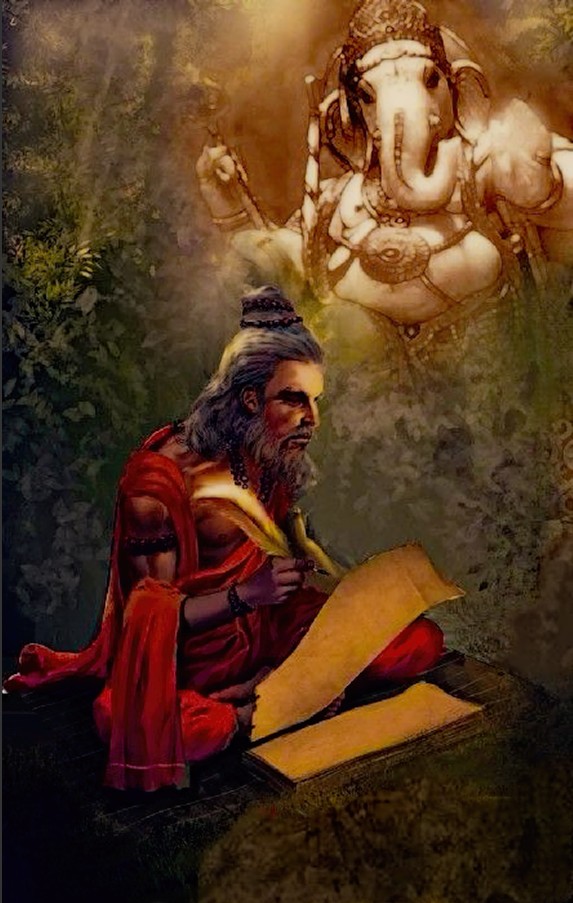 In The Late Eighteenth and early nineteenth centuries, European scholars and scientists began to come in contact with the culture of India. Many were impressed by the antiquity of Vedic civilization and the deep spiritual and material knowledge contained in the Vedic literature. But other European intellectuals were dismayed by these developments. For example, in 1825 the British scholar John Bentley wrote
of his conflict with the scientist John Playfair, who was an admirer of Indian culture:

By his [Playfair’s] attempt to uphold the antiquity of Hindu books against absolute facts, he thereby supports all those horrid abuses and impositions found in them, under the pretended sanction of antiquity.… Nay, his aim goes still deeper; for by the same means he endeavors to overturn the Mosaic account, and sap the very foundation of our religion: for if we are to believe in the antiquity of Hindu books, as he would wish us, then the Mosaic account is all a fable, or a fiction.1

Bentley and pioneer Indologists such as Sir William Jones and Max Muller worked hard, and quite successfully, to convince people that the Vedic scriptures are nothing but fables and fiction. They started a school of thought that is solidly established in modern universities, both in Western countries and in India itself. One of the teachings of this school is that all Vedic literature, from the Rig Veda to the Puranas, is essentially a fraudulent concoction written in recent times.

In the early days of Indology, writers such as Bentley openly expressed the opinion that the authors of the Vedic scriptures were impostors, cheaters, and superstitious fools. Today scholars customarily express these conclusions in moderate language, which often gives the impression that they are favorably disposed toward Vedic culture. But the conclusions are the same. For example, Clifford Hospital teaches at Queen’s University at Kingston in Canada, and he has been principal of the Theological College since 1983. In a recent interview conducted by the Vaishnava scholar Steven Rosen, he discusses the date of the Srimad- Bhagavatam:

Steven Rosen: And it [the Bhagavatam] predates Vopadeva?
Dr. Hospital: Oh yes. Absolutely. On a separate note, though, what’s interesting about their [J. A. B. van Buitenen’s and Friedholm Hardy’s] work is that they do a detailed analysis about the relation between certain parts of the Bhagavata and the South Indian Alvar tradition. I think they make a very good case for what people have long suspected: that many of the ideas of the Bhagavata are coming out of the South Indian tradition.

All Indologists, historians, and archaeologists in modern universities agree that there was no civilization in the Ganges basin of India five thousand years ago. To say that there was such a civilization is considered utterly indefensible. This means that no modern-day scholar can say that the pastimes of Krishna recounted in the Bhagavatam and the Mahabharata really happened. According to accepted scholarly conclusions, the civilization in which those pastimes are said to have occurred simply did not exist. The stories of that civilization are mythological and were gradually invented over the centuries, beginning with early versions of the Mahabharata in the third century B.C. and culminating in the Bhagavatam in perhaps the ninth century A.D.

Indologists often say that ancient Indians were content with fables and had no interest in recording history. Yet some traditional Vedic scholars strongly disagree with this. For example, Pandit Kota Vankatachela has written a book giving an unbroken sequence of kings of Magadha from the time of the Mahabharata up to the invasion of India by Muhammad Ghori in 1193 A.D. He uses the Puranas and related Sanskrit texts to give dates for the reigns of these kings. The table on page 18 lists the kings and the dates of their reigns, from Jarasandha to the dynasty of Candragupta Maurya.

According to Vankatachela’s presentation, recorded history in India extends all the way back from the Middle Ages to the time of the battle of Kurukshetra. But his dates disagree with accepted scholarly conclusions. For example, note that the dates for the reign of Candragupta Maurya are 1534-1500 B.C. According to the Indologists, Candragupta Maurya was a contemporary of Alexander the Great, who invaded India in 326 B.C. They would reject Vankatachela’s list of kings as largely fictitious.

What is the truth? To find out with reasonable certainty requires extensive research. Indologists have written hundreds of books and scholarly articles expounding their views, and these need to be carefully studied. Historical information is found in many Sanskrit texts, including major and minor Puranas, commentaries on Puranas, and related works. Other sources should also be researched—temple records, jyotishashastras, calendrical records, the works of traditional panditas such as Vankatachela, and finally, archaeological evidence and records from other ancient civilizations.

One of the key stratagems of the early Indologists was to use science as a weapon to show the absurdity of Vedic scriptures. They observed that to break people’s faith in the philosophical and metaphysical teachings of the scriptures is difficult, since these involve subjects beyond the reach of our senses. But by showing that the scriptures give an unscientific account of observable natural phenomena, Indologists could make people lose faith in all scriptural teachings. Bentley made this point in connection with the science of astronomy:

It is by the investigation of truth, and the exposure of Brahminical impositions, which can only be done through the means of astronomy, that the labours of those who are laudably endeavoring to introduce true religion and morality [i.e. Christianity] among the Hindus can have their true and beneficial effect. So long as the impositions and falsehoods contained in the Hindu books, which the common people are made to believe are the productions of their ancient sages, are suffered to remain unexposed, little progress can be expected to be made: but let the veil be withdrawn, uncover the impositions by true and rational investigation, and the cloud of error will of itself disappear; and then they will be not only more ready, but willing to adopt and receive the word of truth.4

Since Bentley’s time, Indologists have tried hard to show that Indian astronomy consists of unscientific ideas originating in India, and misrepresented scientific ideas borrowed from the Greeks and the Babylonians.

We can argue that this is not correct, but much research is needed. A beginning has been made with the publication of our book Vedic Cosmography and Astronomy.

As it turned out, the strategy of using science to discredit the Vedic scriptures backfired. Science was also used to discredit Christianity. As a result, many of today’s Indologists tend to take a secular stance, and reject the Vedic literature as false, not because it disagrees with Christianity, but because it disagrees with fundamental tenets of modern science. Likewise, instead of becoming ready to receive the Christian “word of truth,” college- educated people in India now accept the mechanistic world view of modern science. The impact of modern scientific thinking on people’s understanding of Vedic literature is shown by the following remarks by Dr. H. Daniel Smith, a professor of religion at Syracuse University. He comments on the Ramayana:

Dr. Smith: Well, to get right down to basics, it has to do with how one understands the word avatara, more specifically, in what sense, if any, the avatara of Rama was historical. If so, when? If so, where?
Steven Rosen: They say Treta-yuga.
Dr. Smith: That’s the answer given. And the literalists can even give a date, in July or something of such-and-such a year. And that’s fine for the believer—but it’s only one of several possible perspectives. You see, it’s that literalist commitment to the historicity of it—just as Christians are absolutely committed to the historicity of Jesus—that is at the crux of the matter.
Steven Rosen: Right.
Dr. Smith: Just as many Christians affirm that Jesus really did exist in Jerusalem in the year One, also many Hindus say with the Ramayana: Rama really did exist, and he lived in Ayodhya, and when he went, he went out to Lanka, and there he fought and defeated Ravana and laid low all the Rakshasa hosts. Now that’s a real tight bind that people put themselves in. Whereas on the other hand, another way of dealing with it is to say that it is all a myth. Now please don’t misunderstand me: this view doesn’t necessarily hold that the story is fictional; what it says is that the Ramayana is telling a story that doesn’t have to be taken literally on all counts, and that it is basically a story, if nothing else, that tells us quite a bit about human nature.
Steven Rosen: And some believers take it like that?
Dr. Smith: Oh, indeed. Quite a few Hindus share that perspective—not many but there are definitely those who do. For example, how do college educated Hindus deal with it? Well some, to be sure, just go back to their childhoods, saying, ‘Oh Rama. Bless Rama.’ Others, however, do try to think in terms of mythic meaning, and try to probe for deep, psychological references in their own experiences.

Note the attempt to soften the blow: A myth is not necessarily fictional; it’s just a story that doesn’t have to be taken literally and that tells us something about human nature. The reasons Smith gives for calling the Ramayana a myth are significant. First, there is the problem of saying that Lord Ramacandra lived in Ayodhya in the Treta-yuga. This is ruled out by the Darwinian theory of evolution, which says that in that time period, more than 864,000 years ago, there were no humans of the modern type.

Careful research, however, can reveal evidence contrary to the accepted scientific view and in agreement with the Vedic picture. Drutakarma Dasa and I wrote a 900-page book, Forbidden Archeology, which gives extensive evidence showing that human beings of the modern type have been living on the earth for many millions of years.

Another problem raised by Smith is that if we take the Ramayana literally, then we are obliged to accept the existence of beings such as Rakshasas, endowed with remarkable mystical powers. Smith refers to the world of the Ramayana as a “Walt Disney world” of fantasy—a world that scientifically educated people can hardly take seriously. This problem applies to all the Vedic literature, which presents a view of reality that assumes the existence of mystic powers, beings with subtle bodies, transmigration of souls, and avataras of the Supreme Personality of Godhead.

This too is an area where the findings of careful research support the Vedic world view. A great deal of evidence in the domain of the paranormal supports the reality of subtly embodied beings and mystic powers. Official science tends to reject this evidence because it violates accepted theories. Theoretical frameworks can change, however, and many eminent scientists have seriously studied paranormal phenomena. Research findings in the domain of the paranormal fit consistently into the Vedic world view. They give empirical support to the reality of the Vedic picture, and the Vedic literature provides a rational, scientific framework for understanding paranormal phenomena.