Home Featured Articles Sanskrit in Croatia: from Sarasvati to Hrvati 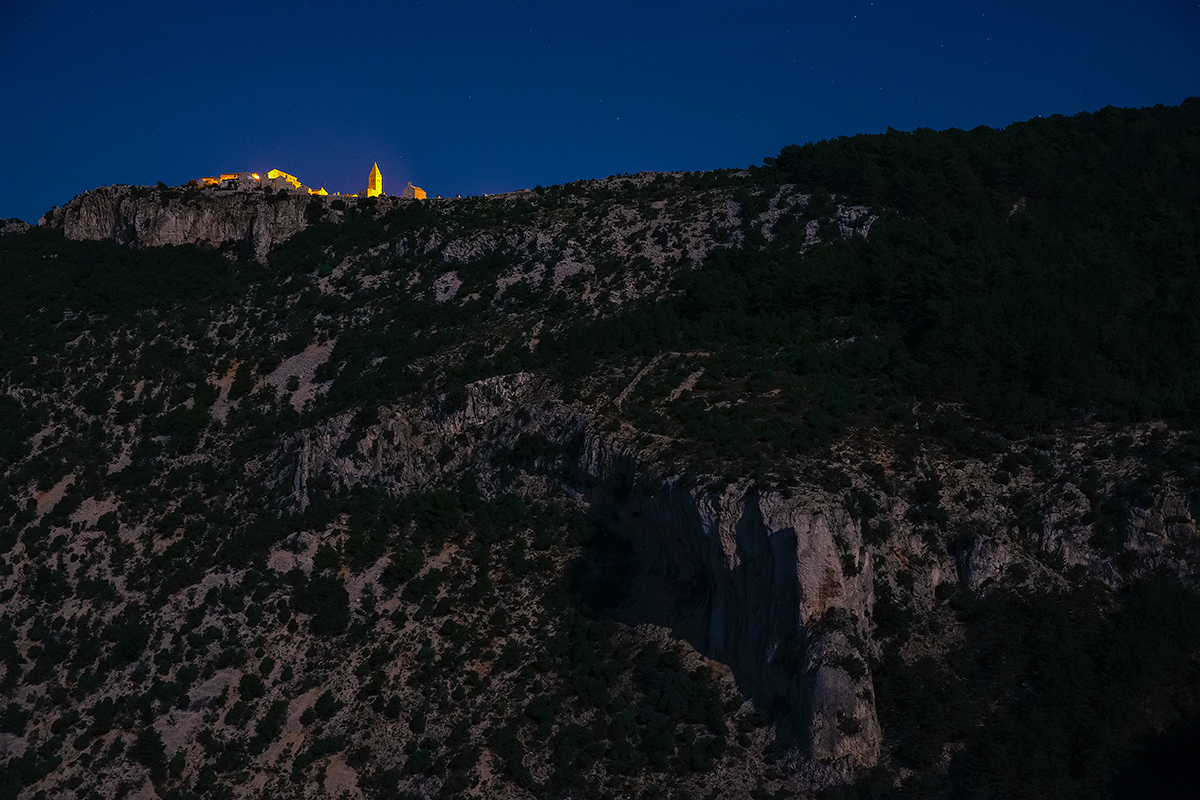 For most of the Croatian people (or as they call themselves, Hrvati) when it comes to defining their origins and tracing their ancient roots they turn towards the land of Iran and Persia. According to academia the name Hrvat comes from Hrovat which comes from the Slavic  Horvat which originates from the Indo/Slavic Harvat and which is ultimately traced to Persia and the name Harahvaiti.

Harahvaiti however, is the corrupted name of Sarasvati, the great Vedic Goddess, the Mother of Sanskrit, the great river of the Rig Veda and the Goddess of learning. The Persians had a tendency to replace a Sanskrit ‘S’ with a Persian ‘H’, and so the word Haravaiti is actually Sarasvati.

This tendency can be seen in their word for ‘week’, hapta, which is in the Sanskrit sapta meaning week. Their name for the ‘Sun’,Hvar, is the Sanskrit Svar meaning the same. In the Avestan we find the seven rivers of the Aryan land are described as  hapta hendu, an obvious corruption of sapta sindhu, the seven rivers of India. Finally there are the rivers of Iran, Haravaiti and Harayu which are the Vedic rivers of Sarasvati and Sarayu. And so if the name of Croat (Hrvat) comes from  Harvat and this in turn comes from Harahvaiti, we must conclude that the source is Sarasvati.

Sarasvati is one of many words which are cognate with the Croatian language.

According to academia, the oldest recorded name Harvat, was found in the Mittani/Hurrian documents spoken by King Tusratta some 3500 years ago. In the documents he refers to his Kingdom as Huravat Ehillaku.

We should note, however, that the King who spoke this 3,500 year old inscription was a Vedic/Hindu King, Tusratta being a corruption of  Dasaratha, dasa being Sanskrit for ‘ten’ and ratha Sanskrit for ‘chariot’.

It is an academic fact that the Kingdom of Mittani was ruled by Vedic Kings. Here we note that the capital of Mittani was called Vasukhani.  Vasu being Sanskrit for ‘wealth’ and Khani means ‘mine’ – ‘a mine of wealth’. So if the roots of Croatian civilization are intimately connected with Iran and Persia, and in particular Mittani and the Hittites, one should take into consideration the Vedic influence behind it all.

Spotted in isolation, they would deserve nothing more than a raised eyebrow, but seeing a number of them, and taking in consideration the similarity between the Croatian and Sanskrit languages, we can only conclude that at some time in the distant past there was a presence of Vedic India in those lands.

The island of Hvar is said to be the number one hotspot of Europe, seeing more sunshine in a year than anywhere else. Its name, Hvar, is a Persian word meaning the ‘Sun’, in the Avesta, Hvar is the name for the ‘God of the Sun’. This once again reflects the relationship between Croatia and Persia, however, it should be observed that Hvar is a corruption of the Sanskrit Svar meaning ‘Sun’ or ‘heaven’ and once again reflects the Persian tendency to turn a Sanskrit ‘S’ into a Persian ‘H’.

We can also find this Svar in the Croatian Slavic folklore, with divine personalities such as Svarogand Mater Sva.  Svarog means the ‘God of the Sun’, the ‘God of heaven’ and Mater Sva is a solar Goddess known as the ‘Mother of heaven’.

The Croatian town of Bogdanov Vrh is an interesting placename, meaning the ‘gift of God’. Bogcomes from the Sanskrit words  Bhaga (‘God’) and dan or dana meaning ‘gift’.

We see the same roots in the name of the Capital of Iraq, Bhagdad.

In Sanskrit we have the word Sveta which means ‘light’, ‘bright’, ‘white’. Vedas speak of the heavenly region of Svetadvipa.  Dvipa (‘island’) and Sveta (‘milky’ or ‘white’), Svetadvipa means ‘an island surrounded by a milky white ocean’.

From the Sanskrit Sveta we get the Croatian first names: Sveta or Svjetlana or Sveto – all of them pertaining to ‘light’, ‘bright’ and by extension ‘pure’ or ‘saintly’.

(In many other Slavic nations we get the variations of the same word, so in Russia for example, we have Svetlana, in Czechoslovakia  Svetla and in Bulgaria its Svetul.)

The Slavic tradition of Croatia also has the God Svetovid, from Sanskrit Sveta (‘light’) and vid (‘to see’). The God Svetovid is portrayed as white and bright with white hair, white beard, white clothes and white horse, all reflecting this white, bright meaning to his name,  Svata-vid. Throughout Croatia we see this Sanskrit sveta in many place names such as Sveta Marija – Sveta Nedelja – Sveti Durd – Sveti Ivan – Sveti Juraj – Sveti Lovrec – Sveti Martin – Sveti Peter – Svetvinčenat.

The Croatian word for home is dom, originating from Sanskrit dam (‘house’). We see this dom in English words such as domestic and Kingdom meaning ‘of the home’ and ‘the home of the King’, and in Sanskrit we have dampati which means the ‘Lord of the house’. Below are further examples of the relationship between the Croatian and Sanskrit languages.

The coastal town of Umag may also reflect the Croatian/Iranian/Vedic relationship.

Umag was originally called Magus, a name most relevant to the Iranians whose priests were known as Magi, men of magic and Magus which in Latin meant wizard. Magus was once part of Illyria which was known as a place of magic, In 11th century BC Istria was inhabited by the Histri – the Illyrian tribe after whom Istria was named. It is also known as Terra Magica, ‘the magical land’. As usual the grey academics paint a different story explaining how Magus is a Celtic word meaning fertile land and while this happens to be true, it does not necessarily apply to Umag. The Celts were intimately connected to the Persian Zoroastrians, they knew the esoteric meaning of Magi and Magus – the term Druid has the same meaning as in ‘seer’, and even the Bible mentions the Magi as a gifted seer and prophet.

A Celtic King was also known as Magus and his name did not mean ‘fertile land’, rather it described him as a man of great wisdom. The Persians and Croats were obviously intimate and so were the Druids and Magi. Magus, the original name for this coastal town now known as Umag may have meant much more than ‘fertile land’ – it may have reflected the magic of Istra and the Illyrians.

The source of these names however, is Vedic/Sanskrit, Magu (‘magician’; ‘priest of the sun’), the word that is the very source of the word Magic, just as the Vedas are the influence and knowledge behind the Zoroastrian religion.

In Sanskrit the word for knowledge is jnana, from jnana we get the Greek gnosis meaning knowledge, and from gnosis we get the English word knowledge – Jna-na – Gno-sis – Kno-wledge.

In Croatia, on the enchanted islands of Istra, there are regions which bear this very same name, jnana. There is Grisignana – Lisignana – Galignana – Antignana – Dignano and Visignano. We find little information on these places except they are very ancient having been inhabited for over 7000 years.

Kali is an island off the coast of Istra, the name is an obvious Vedic/Hindu name, yet here it is as an island of Croatia in a land whose language is hardly distinguishable from Sanskrit. Throughout the region we also find names such as Kalinovac, Kalik and Kalinić.

Ancient port of Budava is a region which was once the main port of Istra; in Sanskrit buddhvameans to awaken.

In Croatia we also find rivers which have names which are decidedly Sanskrit. The Drava river is a major river which flows from Italy and travels through Austria, Slovenia, Croatia and Hungary. In ancient times it was known as the Dravus, so named by the Celts. The source of the name however is Sanskrit,  Drava being Sanskrit for flowing, fluidity and stream. The Raša is a Croatian river whose name is very much related to Vedic India, Rasa being Sanskrit for water, liquid, juice, taste, elexir, nectar, essence, love. In the holy town of Vrindavan, India, the Gopis, who are great devotees of Lord Krsna, dance with the Lord and this is known famously as the rasa dance, expressing the highest rasa – the love of God.

The Sava is a major river of Croatia, its name in Sanskrit means ‘water’ and ‘pouring out’. The Sava is a tributary of the river Danube which also flows throughout Croatia, Danube being named after the Vedic Goddess Devi Danu.

We see this sthana being used as a suffix for many countries such as Turkistan, meaning the land of the Turks and we also see it in Kurdistan – Uzbekistan – Kazikstan – Pakistan – Tajikistan – Afghanistan, ect. Below is the last table of words whose similarities show the ancient relationship between the two countries Croatia and Vedic India.

“The original name of the Indo/Iranian Goddess was Sarasvati ‘she who possesses waters’. In India she continued to be worshipped by this name which she gave to a small but very holy river in Madhyadesa (Punjab) whereas in Iran Sarasvati became, by normal sound changes Harahvati, a name preserved in the region called in Avestan Harakhvaiti and known to the Greeks as Anacosia, a region rich in rivers and lakes. Originally, Harahvaiti was the personification of the great river which flows down from the high Hara into the sea Vourukasa and is the source of the waters of the world, and just as the wandering Iranians called the great mountains near which they lived Hara, they gave Harahvaitis name to the life giving rivers and their Indian cousins did the same.”

A history of Zoroastrianism – the early period by Mary Boyce

“The oldest actual contact, as the Zagreb linguist Radoslav Katičić has pointed out in a recent colloquy dedicated to Indo-Yugoslav relations, is to be found in the primeval religion of the Slavs, which was by origin Indian, partly through Persian intermediation. However this fact, proven by the analysis of the expressions for deities, is common to all Slavonic people “.

India and the Yugoslavs, a survey of the cultural links
by Ivan Slamnig, Department of comparative literature faculty of arts, Zagreb University.