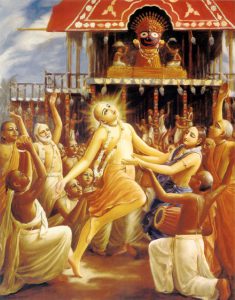 When the ray of prema that appears in one’s heart as bhava is properly cultivated through nama-sankirtana, it turns into prema. Attaining prema, one tastes (asvadanam) the totality (purnam) of the nectar of immortality (amrta) at every step (prati-padam). This prema is first experienced through unbearable pangs of separation from Krishna followed by the joy of union. However, at every step, either in union or in separation, the prema-bhakta tastes the nectar of immortality.

Immortality is compared to deathless nectar, the fountain of youth. Life beyond death, however, is not the full cup of immortality. The totality of the nectar of immortality involves tasting prema forever in a realm where talking is singing and walking is dancing in nama-sankirtana. Thus nama-sankirtana, unlike other spiritual practices, is both sadhana and sadhya. It is the paramount spiritual practice that not only carries one into eternity but continues to manifest in perfection as prema-sankirtana. This sadhya—prema—is the final glory of nama-sankirtana, and it will be discussed further in the seventh and eighth stanzas of Siksastakam.

The limitations of worldly love are not found in prema. Worldly love does not involve the soul proper, nor are one’s material senses and mind ever satisfied by it. In worldly love the senses are not perfect, but prema grants one spiritual senses to facilitate one in satisfying the transcendental senses of Krishna. Without such spiritual senses it would be impossible for one to fully taste prema. When one attains prema, one’s senses, mind, and soul are fully bathed in a shower of spiritual love, and thus they become fully satisfied.

The word atma means body, mind, or soul. Thus sarvatma-snapanam indicates that nama-sankirtanapurifies not only the soul but one’s body and mind as well. The word atma can also refer to Krishna, the soul of all souls, and in prema, not only are his devotees showered with his love, but they also shower Krishna with their love.

In prema, absorption in one’s spiritual identity (svarupavesa) is complete, as one is immersed in an ocean of the nectar of Krishna’s service. After uttering the first verse of Siksastakam, Sri Gaurasundara explained this himself to Rama Raya and Damodara Svarupa, while summarizing the effects of Sri Krishna sankirtana:

Sankirtana destroys sin, samsara,
cleansing one’s consciousness.
It gives birth to all of bhakti-sadhana—
birth to the sadhya of krishna-prema.
It gives the taste of prema’s immortal nectar
and attainment of Krishna,
thus drowning one in a sea
of sweet service perpetually.1