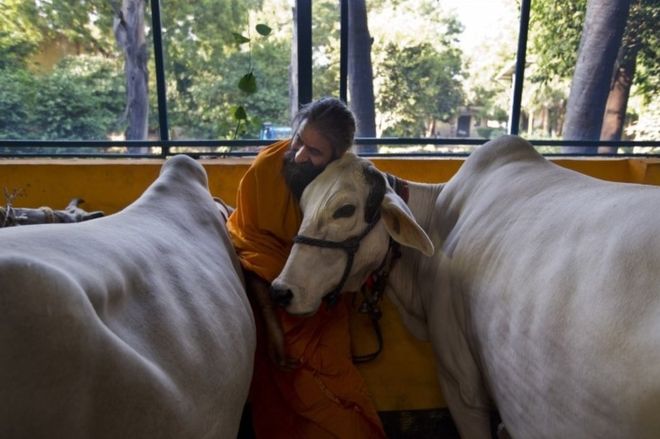 Indian Prime Minister Narendra Modi has criticised vigilantes who portray themselves as protectors of cows – an animal considered sacred by Hindus.

Mr Modi, a Hindu nationalist, said such people made him “angry”, and any such attacks must be investigated.

He had been criticised for saying nothing about a public flogging last month of low-caste men by vigilantes.

The self-styled cow defenders accused the four men from the Dalit caste of harming cattle.
The victims insisted they were taking a cow’s carcass for skinning, as was their tradition.
Also in July, two Muslim women were beaten up by vigilantes over accusations that they had been carrying beef.

Speaking in the capital Delhi on Saturday, Mr Modi said he would ask state governments across India to investigate anyone linked to such vigilante attacks.

He said he believed “70-80% of them will turn out to be people who are involved in anti-social activities and masquerade as cow protectors to save themselves”.

Up to now some commentators believed Mr Modi was staying quiet on the issue of vigilantes so he could maintain his appeal among Hindu nationalist voters, the BBC’s Charles Haviland says.

Mr Modi was similarly criticised last year, when he took two weeks to condemn the lynching of a Muslim man over rumours he had stored and consumed beef.

The slaughter of cows is banned in several Indian states.

But the ruling Bharatiya Janata Party government has come under increasing pressure from Hindu hardliners to do more to protect cows.

The majority of India’s estimated 1.2 billion population is Hindu. However the country is also home to large Muslim, Christian and Buddhist minorities.