Earth Overshoot Day isn’t one of those fun holidays, like International Cat Day or Squirrel Appreciation Day. Instead, it’s a depressing reminder that we humans are living well beyond our means. Today (Aug. 8) marks the point when humanity as a whole has used up the resources needed to live sustainably for a year.

The day is declared every year by Global Footprint Network, a nonprofit research group that focuses on sustainability. The first Earth Overshoot Day was in Oct. 2006. It’s been creeping up the calendar ever since, landing on Aug. 19 in 2014, and just last year, reaching Aug. 13. The earlier Earth Overshoot Day falls, the more rapidly we’ve been using the planet’s natural resources.

The exact date of Earth Overshoot Day is determined by a simple formula. Global Footprint Network takes the planet’s biocapacity (pdf), or the amount of natural resources available, divides it by humanity’s ecological footprint, or how much of the planet’s resources we use up, and then multiplies it by the days in a year.

Calculating this day country by country would give very different results. Some countries, like Australia and the U.S., use a lot of resources in a year. Others, like Brazil and India, use far less. Many factors contribute to a country’s ecological footprint, including population size, standard of living and eating habits. 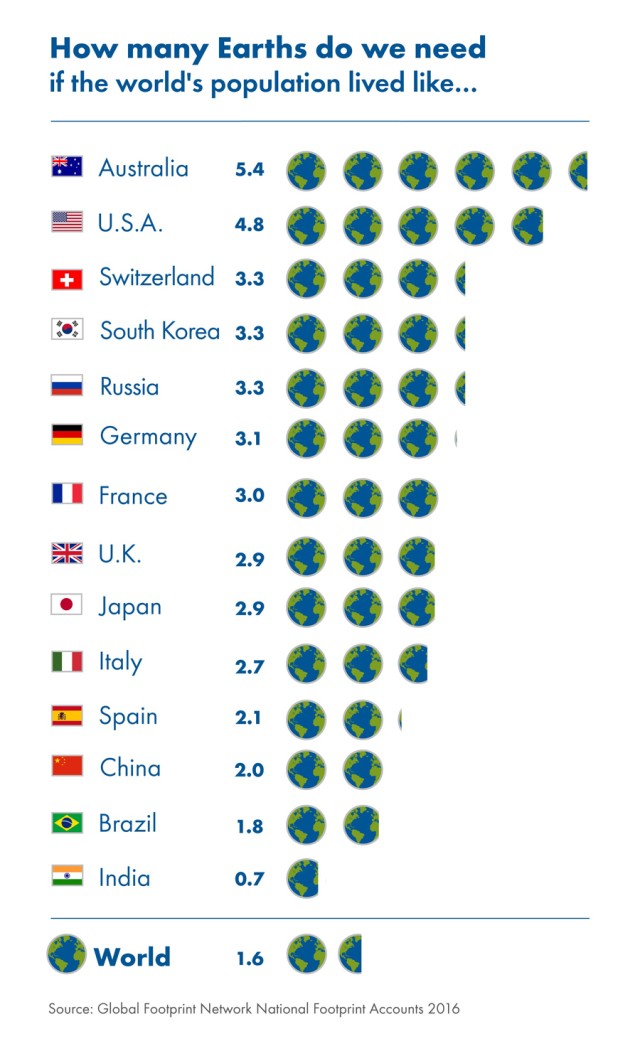 Since carbon emissions are included in the ecological footprint calculation, countries can offset their individual impact by generating electricity with solar panels or wind turbines. The Global Footprint Network also encourages people to eat vegetarian meals, shrink their energy use, and reduce their paper waste. It will take a lot more than recycling paper to move Earth Overshoot Day toward Dec. 31, but if countries can work together on ambitious global climate change mitigation plans like the 2015 Paris Agreement, then maybe sometime in the next decade we can celebrate this terrible day in the fall instead of the middle of the summer.