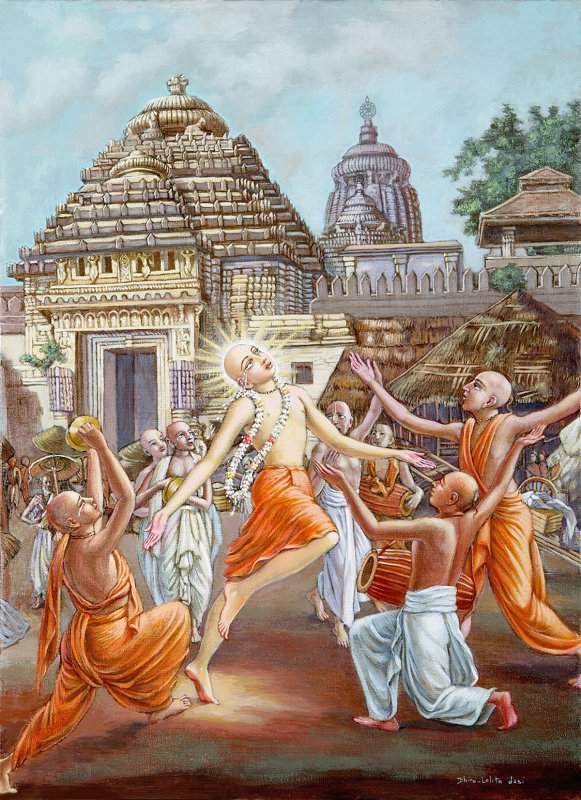 In the beginning of his eightfold teaching, Gaura Krishna trumpets the virtues of Sri Krishna sankirtana in an effort to awaken sraddha (faith) in its efficacy and thus give rise to sraddha’s outward expression of saranagati (surrender). Such faith creates eligibility for treading the bhakti-marga. Divine faith is the beginning of Krishna bhakti. Filled with such faith, Gaura Krishna cries out, param vijayate sri-krsna-sankirtanam.

The words param vijayate call for exclusive adherence to Sri Krishna sankirtana, forgoing any other path. With a similar emphasis on sraddha and saranagati, Bhagavad-gita, Sri Krishna’s song to Arjuna, reaches its conclusion. The famous words sarva-dharman parityajya mam ekam saranam vraja bring Sri Krishna’s song to a close.1 Following this conclusion, Krishna’s life story, Srimad-Bhagavatam, begins with the same emphasis. The words dharmah projjhita-kaitavo ’tra open the book about his life.2 Both the closing statement of Bhagavad-gita and the opening statement of Srimad-Bhagavatam advocate faith in exclusive devotion to Sri Krishna and the surrender that corresponds with it.

As Krishna’s concluding words of the Bhagavad-gita are strong yet prefaced by more than six hundred verses justifying them, so too are the opening lines of Srimad-Bhagavatam strong yet well supported when they dismiss all other expressions of dharma and even the ideal of salvation. The insistence on exclusive devotion in the Bhagavata’s introduction is followed by almost eighteen thousand verses in support of its premise. Similarly, Siksastakam’s initial emphasis on sraddha and saranagati has been prefaced by Gaura Krishna’s entire life of divine love, which speaks louder than precept. Gaura’s position is also well supported by the virtues of nama-sankirtana that he lists in the balance of this initial Siksastakam sloka, the seven successive verses of Siksastakam, and the ocean of scripturally based literary support that the Vrindavana Gosvamis and their successors churned from the Siksastakam.

Thus Siksastakam promotes from the outset faith in the efficacy of exclusive Sri Krishna sankirtana. This faith is not blind, dogmatic belief, but rather enlightened faith drawn from revelation. Such faith mandates change in our lives, a change of heart that involves saranagati, the stage on which the drama of krishna-bhakti is performed. The first six steps on the ladder to vraja-bhakti—from initial sraddha to ruci (taste)—is the process of fully erecting the stage of saranagati within one’s heart, thus connecting the ray of faith that first dawns in one’s heart with the sun of faith that never sets in the land beyond doubt and misconception. It is faith in the efficacy of Sri Krishna sankirtana that situates one on the path, and faith-filled sankirtanaitself that moves one along.

Kirtana means glorification of another. It derives from the verbal root kirti, which means fame. It is that by which one makes the virtues of others well known, and that by which one becomes virtuous oneself. In general, one becomes glorious by praising others, as opposed to glorifying oneself. One can praise another’s name, qualities, form, or activities, making for different kinds of kirtana.

Here in Siksastakam, Sri Caitanya emphasizes nama-kirtana, but not kirtana of just any name. He calls for exclusive kirtana of the name of God, which is considered to be nondifferent from God himself. If there is any difference between Krsna and his name, it is that in the form of his name he is more approachable. Sri Rupa Gosvamipada has explained this in his Sri-krsna-namastakam:

O Harinama!
You manifest in two svarupas
as “named” and “name.”
The name’s fame exceeds that of the named.
What proof is there of this?
The name’s serious offender
upon becoming a repenter
with words and worship of this name in a sea of bliss will always bathe.3

Thus in the form of Krishna kirtana, Krishna nama is both high, being one with God, and highly accessible at the same time.

Mahaprabhu has further qualified his method of kirtana, advocating not only kirtana of the name of Krishna but sankirtana of Krishna nama. Sam means full, complete, and comprehensive. The word sankirtanaimplies comprehensive glorification that is both quantitatively and qualitatively so. Glorification is quantitatively complete if it is unanimous—if everyone present participates. Thus sankirtana suggests glorification in unison with other like-minded persons, and thereby the association of saintly persons—sadhu-sanga.

The quality of Gaura Krishna’s sankirtana cannot be understood without mentioning Radha. The word sri in Gaura’s first verse speaks of Krishna’s divine consort. It is in pursuit of her love that Krishna becomes Gaura and sings in sankirtana. He sings in her mood, seeing himself through her eyes. No one knows Krishna better than Radha. Her love is called samartha-rati, competent love. It is capable of completely conquering Krishna, and as we shall see from the final sloka of Siksastakam, it is this kind of love that Sri Caitanya tastes and distributes in Sri Krsna sankirtana—the highest quality of love, Sri Radha’s prema in mahabhava.

Although sankirtana is the dharma of Kali-yuga, in the current yuga cycle there is a special concession. Not only does Gaura Krishna distribute dharma in the broadest possible outreach, he distributes the highest quality of prema, inviting everyone into the innermost chamber of his own heart. Thus he has woven a wreath out of both prema and sankirtana and seeks to garland the world with it.4

When the raja of Puri first witnessed the sankirtana of Gaura’s associates, he was filled with wonder (camatkara). He had never witnessed this kind of kirtana, this kind of dancing, this kind of love.5Prataparudra Maharaja was no stranger to glorification of Krishna. He presided over a city centered on Krishna’s glorification, a city that was host to millions and millions of pilgrims. When he asked his brother-in-law what kind of kirtana it was, Gopinatha replied, caitanyera srsti ei prema-sankirtana: “This is the creation of Sri Caitanya. It is called prema-sankirtana.”6 Not all forms of sankirtana offer prema, but the sankirtana of Gaura Krsna is about prema alone. Indeed, it frowns on mere deliverance (mukti).

The special concession of prema-sankirtana is a result of Sri Caitanya’s being Krishna. He is not the usual Kali-yuga avatara, who appears in the world to deliver people from birth and death by advocating the yuga-dharma. He is not an avatara of Narayana or Krishna but rather Krishna himself. Although he does teach the yuga-dharma, he has another internal agenda of his own. He does not chant merely taraka-brahma nama but paraka-brahma nama. Paraka means “competent.” Here it implies that the Hare Krishna nama-mantra is competent not only to deliver one from samsara but furthermore to give the treasure of prema.7

Thus Siksastakam’s phrase param vijayate sri-krsna-sankirtanam heralds the glory of that which is the best form of sadhana/sadhya, or spiritual practice that naturally leads to the highest form of spiritual perfection in prema. What then is the need for any other sadhana, and where can one find a higher sadhya?

After praising the paramount spiritual practice with the words param vijayate sri-krsna-sankirtanam, Sri Caitanya delineates seven effects of nama-sankirtana. In the vision of Thakura Bhaktivinoda, these seven effects correspond with the seven sequential steps that follow sraddha and sadhu-sanga and end in prema as delineated by Sri Rupa Gosvami in his Bhakti-rasamrta-sindhu. Sri Rupa writes:

First faith, then holy association,
followed by the acts of bhajana,
resulting in the cessation of obstacles,
then steadiness, taste, attachment,
ecstasy, and divine love.
This is the order of the stages
through which prema arises in sadhakas.8

The first two of these steps, sraddha and sadhu-sanga, have already been discussed.9

After arousing faith in the method of his divine madness and implying that it is best pursued in the company of sadhus, Sri Caitanya has chosen to enumerate seven particular glories of nama-sankirtana, which correspond with the seven steps remaining to attain Krishna prema. Each of these steps is further described in greater detail in the next seven verses of Siksastakam.———