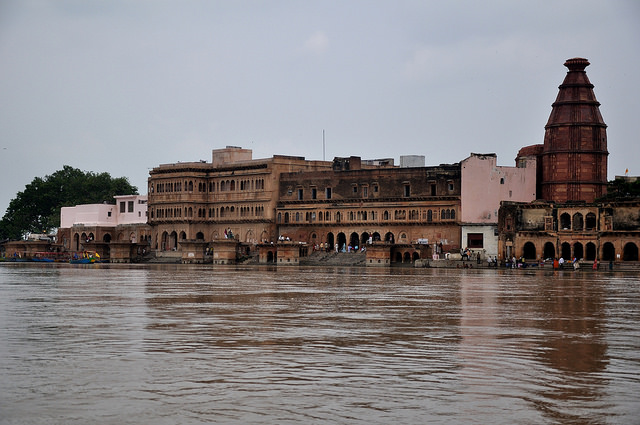 Heavy rains in the hilly areas have resulted in increased water levels in the Yamuna. Old parikrama road is completely water logged with 3 feet deep Yamuna water flowing on it, due to which devotees are bound to change route to offer Vrindavan parikrama. Illegal societies at Kalidah and Pani Ghat are also facing the threat of flood as the Yamuna water level rises.

Water in huge quantity has been recently released from the dams located at Tajewala and Hathani Kund, due to which water level has increased sharply in the river within four days. Generally Yamuna flows by a distance of around 500 metres from Keshi Ghat, but has returned to the ghat in the past few days. The same situation is with around six other riverfront where Yamuna is flowing touching the old ghats.

Vihar Ghat, Jugal Ghat, Cheer Ghat, Shringarvat, Bhramar Ghat, Keshi Ghat and Vanshi Vat are in their full glory these days as the Yamuna is flowing touching riverfront and recalling the pastimes and beauty of Vrindavan. Devotees from around the world are taking advantage of the situation by taking boat rides across the river and spending time on the riverside.

Devotees offering Vrindavan parikrama have to divert their route via Cheer Ghat and Radha Raman to complete the “panch-kosi” parikrama of the holy city. Officers from Irrigation Department said that the water level has risen due to heavy rainfall in hilly areas, but the situation will return to normal soon.

More than 100,000 cusecs water released from Tajewala and Hathini Kund dams and heavy rains in nearby areas have resulted in a rise in Yamuna water level, where water level flowing at the sign of danger in Mathura. The water level at Prayag Ghat is touching the danger mark of 165 metres. Gokul Barrage has also been releasing more water in the past few days, due to which many areas near the river are dipped in water.

A devotee from Khurja drowned in the river after his feet slipped on the stairs at Keshi Ghat. Divers took around three hours to find the dead body in 25 feet deep water.

Dinesh Kumar (19 years) had came along with 42 villagers for Braj darshan last week. During the trip, he went to take a holy dip in river at Keshi Ghat, where his feet slipped and he fell in the river.

A cowherd from Mathura drowned in the river when he went out for a walk along with his buffalo. 23 years old Ram Gopal went out with his buffalo as a part of daily routine but hasn’t returned till evening after which his family reported the case with the local police station. The dead body is still missing.