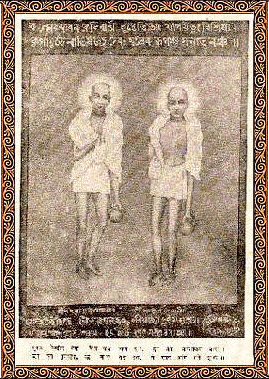 The Disappearance day of Srila Sanatana Goswami is observed on July 19th.

Sri Sanatana Gosvami took his birth in 1488 A.D. (1410, Sakabda). As a child, he began his studies along with his brothers, from their maternal uncle’s house in a small village called Sakurma near the capital of Gaura-desa. At the age of 27 he came to live at Braja, and remained there for 43 years. At the age of 70, Srila Sanatana disappeared on the full moon day of Asar in the year 1558 A.D.

In the conclusion of his commentary on the Bhagavata, the Laghu-Vaisnava-Toshani, Jiva Goswami describes the ancestral line of his uncle, Sanatana Goswami. This genealogy states that there was a king in Karnataka called Srisarvajana, who was known as Jagadguru due to his learning. Srisarvajana’s descendant, Aniruddha, gave his kingdom equally to his two sons, Harihara and Rupesvara, but Harihara forcibly occupied Rupesvara’s dominion and drove him away. Rupesvara then left Karnataka, taking shelter with King Sikharesvara of Paurastya. He later retired to Navahatta (Naihati near Kalna) in Bengal, where he associated with king Danujamardana. His grandson, Kumaradeva, moved to Bakla Candradvipa (East Pakistan). Rupa, Sanatana, and Anupama were among the many sons born in this brahmana family.

As the elder brother of Srila Rupa Gosvami, Sanatana was the topmost among the six Gosvamis of Vrndavana. Lord Caitanya Mahaprabhu instructed him at Varanasi, teaching him the detailed science of devotional service. Lord Caitanya sent Srila Sanatana Gosvami to Vrndavana and gave him a fourfold mission: to uncover the lost sites of Krsna’s pastimes, to install deities of the Lord and arrange for Their worship, to write books on Krsna consciousness, and to teach the rules of devotional life. Srila Sanatana Gosvami, with the help of Srila Rupa Gosvami, fulfilled all parts of this mission.

sa rupa-manjari-prestha
purasid rati-manjari
socyate nama-bhedena
lavanga-manjari budhaih
“Rupa Manjari’s closest friend, who is know by the names Rati-Manjari and Lavanga-Manjari, appeared in the pastimes of Shri Chaitanya Mahaprabhu as Shri Sanatana Goswami, who is considered to be a personal extension of the body of Shri Chaitanya Mahaprabhu.”
“Sri Sanatana Gosvami is described in the Gaura-ganoddesa-dipika (181). He was formerly known as Rati-manjari or sometimes Lavanga-manjari. In the Bhakti-ratnakara it is stated that his spiritual master, Vidyavacaspati, sometimes stayed in the village of Ramakeli, and Sanatana Gosvami studied all the Vedic literature from him. He was so devoted to his spiritual master that this cannot be described. According to the Vedic system, if someone sees a Muslim he must perform rituals to atone for the meeting. Sanatana Gosvami always associated with Muslim kings. Not giving much attention to the Vedic injunctions, he used to visit the houses of Muslim kings, and thus he considered himself to have been converted into a Muslim. He was therefore always very humble and meek. When Sanatana Gosvami presented himself before Lord Caitanya Mahaprabhu, he admitted, “I am always in association with lower-class people, and my behavior is therefore very abominable.” He actually belonged to a respectable brahmana family, but because he considered his behavior to be abominable, he did not try to place himself among the brahmanas but always remained among people of the lower castes. He wrote the Hari-bhakti-vilasa and Vaisnava-tosani, which is a commentary on the Tenth Canto of Srimad-Bhagavatam. In the year 1476 Sakabda (A.D. 1555) he completed the Brhad-vaisnava-tosani commentary on Srimad-Bhagavatam. In the year 1504 Sakabda (A.D. 1583) he finished the Laghu-tosani.”

Caitanya-caritamrta, Madyam lila 1:35
“The Fourth Chapter of Antya-lila is summarized by Bhaktivinoda Thakura in his as follows. Srila Sanatana Gosvami came alone from Mathura to Jagannatha Puri to see Lord Caitanya. Because of bathing in bad water and not getting enough food every day while traveling on the path through Jharikhanda Forest, he developed a disease that made his body itch. Suffering greatly from this itching, he resolved that in the presence of Sri Caitanya Mahaprabhu he would throw himself under the wheel of Jagannatha’s car and in this way commit suicide.

When Sanatana Gosvami came to Jagannatha Puri, he stayed under the care of Haridasa Thakura for some time, and Sri Caitanya Mahaprabhu was very happy to see him. The Lord informed Sanatana Gosvami about the death of his younger brother, Anupama, who had great faith in the lotus feet of Lord Ramacandra. One day Sri Caitanya Mahaprabhu said to Sanatana Gosvami, “Your decision to commit suicide is the result of the mode of ignorance. One cannot get love of God simply by committing suicide. You have already dedicated your life and body to My service; therefore your body does not belong to you, nor do you have any right to commit suicide. I have to execute many devotional services through your body. I want you to preach the cult of devotional service and go to Vrndavana to excavate the lost holy places.” After having thus spoken, Sri Caitanya Mahaprabhu left, and Haridasa Thakura and Sanatana Gosvami had many talks about this subject.

After meeting Sri Caitanya Mahaprabhu, Sri Rupa Gosvami also returned to Bengal, where he remained for one year. Whatever money he owned, he distributed among his relatives, the brahmanas and the temples. In this way he completely retired and returned to Vrndavana to meet Sanatana Gosvami.

After narrating these incidents, Krsnadasa Kaviraja Gosvami has given a list of the main books of Sanatana Gosvami, Srila Rupa Gosvami and Jiva Gosvami.”