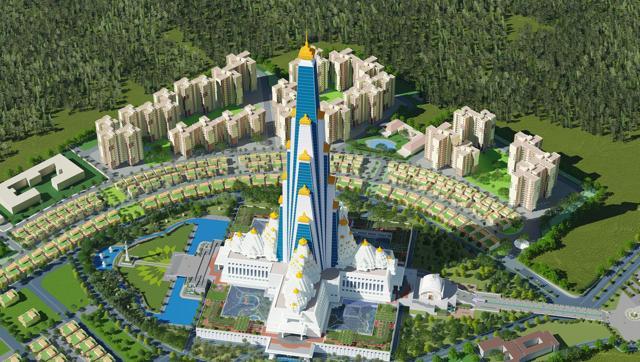 The Chandrodaya Temple being built in Vrindavan is a tall order. At 700ft, the temple will be three times the height of Delhi’s Qutub Minar. But what is more unique about the project is that the temple is being constructed – both in terms of funding and logistical support – by people of several faiths and nationalities.

A project by Bengaluru devotees of the International Society for Krishna Consciousness (ISKCON), the temple is being worked on by 25 specialist consultants from across the world. The core architectural team itself comprises of people from different faiths.

“Srila Prabhupada, while beginning the ISKCON movement in 1965, made clear that this was for an international society comprising of all castes, creeds, religions, nationalities and beyond boundaries. With this ideology, the temple at Vrindavan is coming up and is open for all,” said Suvyakta Narasimha Das, the senior vice-president and project director.

Explaining further, he said Krishna had never meant the message of Bhagavad Gita only for Hindus, and was for everyone who believed.

“This has been the driving spirit of ISKCON… (which is why) even in the construction of the temple, people from all faith including Muslim, Hindu, Christian or Sikh are involved and this makes it a structure of international acceptance,” he added.

Planned at a cost Rs 700 crore, the temple will have four halls – one for Acharya Srila Prabhupada, the founder of ISKCON, one for Chaitanya Mahaprabhu and Nityananda Prabhu, one for Radha Krishna and the Ashta Sakhis, and one for Sri Krishna Balaram, Das said. A devotee will have to walk 1.2 kilometer to reach the room for ‘darshan’.

“Once constructed, it will be the tallest and largest religious structure in India covering an area of 5 acres. Piling work will continue till next Holi after which the work for raising the tower will begin,” the project director said.

The temple’s foundation stone was laid by chief minister Akhilesh Yadav in March 2014. Later that October, President Pranab Mukherjee visited the site for the Ananth Sesh Sthapna poojan. Work for the temple finally began in 2015, with the deadline set for 2022.

However, working with such a diverse collection of experts on such a colossal project has many challenges. Not the least is adhering to local aspirations.
“We are done with the concept phase and are now working on schematic details with focus on durability of the structure over several centuries,” the Misam Imam said. As head of structural design, he says the trick is in figuring out solutions based on materials available in India.

“Another challenge is to work with people who view it spiritually,” he added.
One way around building a 700ft structure is to build it in components and then put it together. “It is more of an assembled structure, hence all features are to be incorporated and ideas from 25 different specialist consultants are being clubbed for better results,” said Singh, the principal architect who has been part of the project since day one.

Much like Misam Imam noted, for Singh, the project is more spiritual than religious.

“The project’s spiritual association reflects lot of energy and is a memorable experience for me.” 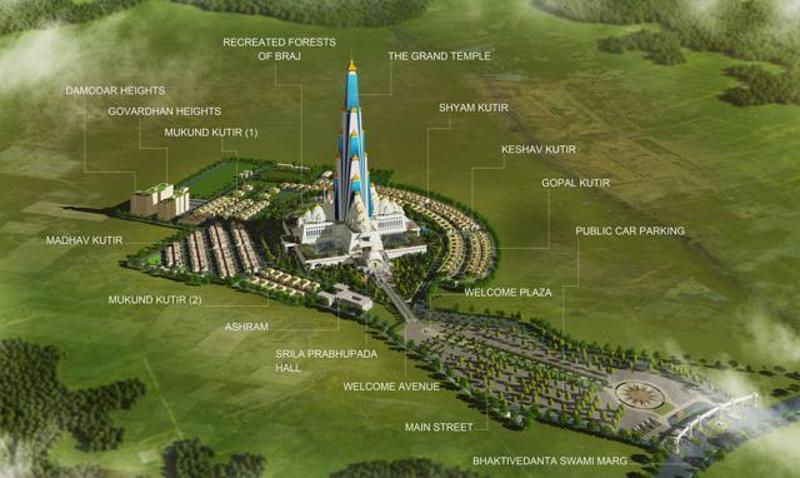 Apart from the main temple structure, the compound will be surrounded by verdant forests, clear water lakes, waterfalls from hillocks – all recreated from descriptions in the Srimad Bhagvatam, Das said. Other attractions will include a Yamuna Creek, Bhagvad Gita Expo and a Krishna Heritage Museum.

Architecturally, a capsule elevator is being included within the core temple structure that will take visitors through different planetary systems in the universe as it rises. The experience will be enhanced with sound, light and dioramas. Once at the top, one will get a spectacular view of Braj Mandal.

Touted as the first LEED Gold certified temple building, it is being designed to have minimum radiative heating of the internal environment. The structural design for this has been given to M/s Thornton Tomasetti, led by Leonard Joseph who is presently designing the Kingdom Tower at Jeddah, the world’s tallest upcoming structure. The fire safety system is being put in place by Sunil Sahani, who designed a similar system for the Burj Khalifa.