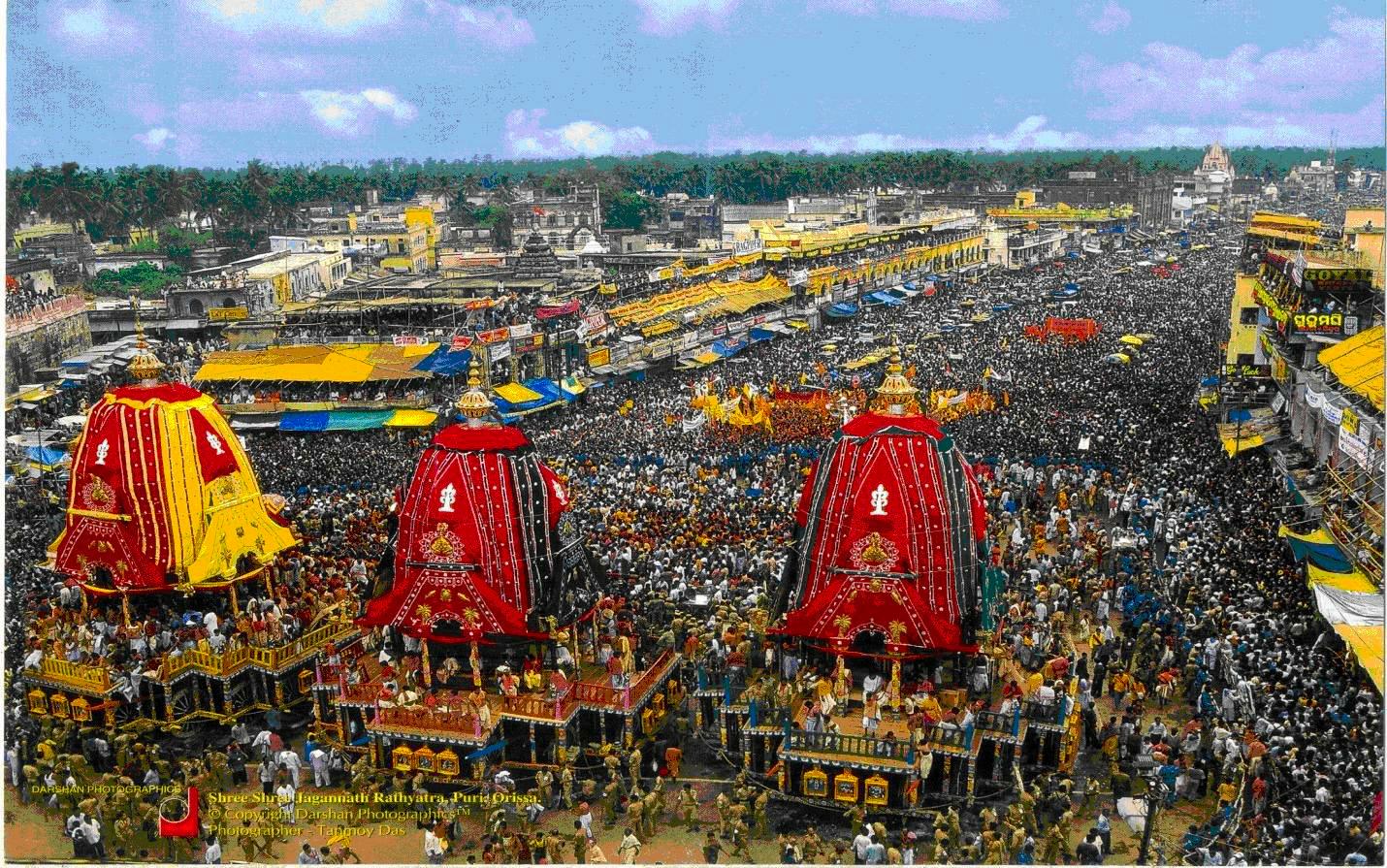 Part one: THE OPULENT ANSWER

Is it a festival celebrating taking Krishna away from Vrindavan?

There are two sides, two answers, that can be offered to this question. To understand them, one first needs to consider something about the nature of Sri Jagannath Puri Dham. In his book, “The Embankment of Separation” (chapter 7), Srila Prabhupada?s Orissan disciple, Sri Srimad Gour Govinda Maharaja describes Lord Jagannath and Puri as: aisvarya-madhurya yugala-milana ? “The combination of both opulence and sweetness.” This point is substantiated by Srila Sanatan Goswami who writes in his Brhad-Bhagavatamrta (2.5.212):

“Just as Mathura-Vrindavan is eternally dear to Sri Krishna, so too is his abode of Purushottam Kshetra Jagannath Puri. There in Puri, Krishna displays supreme opulence and while at the same time presents pastimes that are full of sweetness.”

This may strike the learned readers as confusing, for in terms of siddhanta, there is a vast difference between the qualities of aisvarya, opulence; and madhurya, sweetness. When jnana and aisvarya, knowledge of the Lord’s opulence and position, are present then rati-sankucita — love is shrunken. Srila Krishnadas Kaviraj Goswami has described in (Cc madhya 19.194):

“When opulence is prominent, love of Godhead is shrunken. According to kevala devotion, however, even though the devotee sees the unlimited potency of Krishna, he considers himself equal with him.”

How then do we understand Jagannath Puri and the return Ratha-yatra?

A few years ago we wrote an article in issue 13 of our “Sri Krishna Kathamrita” journal, called, “Only Hindus Allowed”, which addressed the subject of why Jagannath doesn’t allow foreign devotees inside of the temple. In the course of discussing that topic from various angles, another topic came up which is very central to the return Ratha-yatra:

The marriage of Lakshmi and Jagannath.

The Gundicha temple is said to be the place where Lord Jagannath was originally carved by Visvakarma and where he was initially installed by Lord Brahma. Hence, Gundicha represents the sweet home of Krishna’s Vrindavan.

What many devotees don’t know is that the events leading to the Ratha-yatra actually begin several days before the actual event. On the Sukla Ekadasi day of the month of Jyaistha (May June), better known to devotees as Pandava-nirjala Ekadasi, there is a festival Rukmini-harana or Rukmini-vivaha. This event takes place inside the Sri or Jagannath temple, and consists of the priests ceremoniously marrying Lord Jagannath with Goddess Lakshmi.

It is a very romantic festival, part of which entails the ceremonial tying together of the cloths of Jagannath and Lakshmi. Four days later is the day known as Snana-Purnima, wherein Lord Jagannath has a public bathing festival called, Snana-yatra. Snana-Purnima is considered to be the day that the deity of Lord Jagannath was first installed by Lord Brahma.

After his public bath of hundreds of pots of water, Lord Jagannath falls “sick” and goes into seclusion to regain his health. This time is called, anavasara. During this period the newly wedded Lakshmi acts as the ideal wife, and for the next fifteen days she doesn’t sleep, but only nurses her beloved husband.

After fifteen days without rest Lakshmi eventually falls asleep (you can’t blame her!). At that time her newly married husband quietly unties the knot in their cloth and leaves to go see his girl friends Radharani and the Vraja-gopis.

We call that Jagannath Ratha-yatra.

Lakshmi Devi wakes up a few days later to find her husband gone. When she inquires where he is, Jagannath?s servant nervously explains that he went to see his girlfriends. Hearing this, Lakshmi leaves the altar, and goes to stay in the storage room of the Jagannath temple ? like a depressed wife might. She refuses to take bath or eat any opulent food, and dines like poor Orissan people on simple village rice and spinach.

In Odisha there is a sthala-purana known as the Vamadev-samhita. This book describes many aspects of the worship and activities of Lord Jagannath and is one of the main texts followed by the priests in the Jagannath Mandir. Chapter sixteen therein offers many details of the Ratha-yatra (for a more elaborate exposition of the contents thereof, interested readers can see our article in Sri Krishna Kathamrita). It states that after a few days Lakshmi Devi goes to ask advice from Goddess Bimala inside of the temple. To paraphrase things, she basically says, “This is not right! I’m a newly wedded wife! Why did my husband leave me? I was being so good taking care of him. Moreover, he took Subhadra with him, at least he could have taken me!”

Bimala Devi offers some womanly advice saying something to the effect, that, “Yes. I understand. All men are like this.”

Bimala then offers some magic churna or powder to Lakshmi, which she says will, “Help restore your husband’s intelligence.”

The following morning, on the fifth day after Jagannath?s departure, Lakshmi wakes up in a sulky mood. She finally has a bath and puts on ornaments. Then, collecting some of her associates (traditionally represented by the deva-dasis), she is carried on a palanquin to the Gundicha Mandir to see her newly-wedded husband. This festival is known as Hera-pancami, and takes place on the fifth day after Ratha-yatra. Hera means “to behold”, while pancami means “the fifth day”. The festival is also sometimes called, Laksmi-vijayotsava, or “the victory celebration of Lakshmi”.

Angry and jealous, Lakshmi Devi is in the mood of an adhira nayika, a restless, aggrieved heroine. By the time she arrives at the Gundicha Mandir, Lord Jagannath is already inside with his brother and sister. At that time Lakshmi and her girl friends and her harass the Pandas outside who are taking care of Jagannath’s cart and they break part of the cart.

In her angry mood, Lakshmi then goes into the temple to see her husband. She does not speak to Jagannath, but merely comes before him bows her head. Then she blows the magic powder at the Lord that she received from Bimala Devi. Finally, still without speaking, her and her girl friends depart from the temple.

She tells some of the servants of Lord Jagannath, “Tell your master that his wife has returned to their palace.”

Perhaps this makes Lord Jagannath transcendentally nervous as two days later he decides to return to the Jagannath Mandir to see Lakshmi. While Jagannath is returning the king of Puri performs an important function and goes to see Lakshmi Devi. This ceremony is called, Laksmi Narayana Bhet, and the king acts as a kind of go-between marriage counselor.

He shows Lakshmi that her husband has returned, “See his cart.” And tells her that he loves her and she should forgive him. At this time Jagannath traditionally, (not followed any more) sends an elephant for Lakshmi to ride on to come and see him.

Still in a sulky mood, Lakshmi refuses, and when Jagannath requests her a second time she finally comes out of the temple, surrounded by her girlfriends on a palanquin, (not by the elephant sent by her husband). She goes to Jagannath’s cart circumambulates her husband and then quietly goes back inside of the temple. This generally takes place on the tenth day of the bright fortnight of the month of Asadha.

Jagannath wears a special dress the next day known as suna vesa. That day is known in Orissa as Bahudha Ekadasi or the “return Ekadasi”. Having returned to the Sri Mandir, Lord Jagannath wants to pacify his sulky newly-wedded wife. Some say that it is for this purpose that on the evening of Bahudha Ekadasi he wears the suna-vesa, golden dress. This most opulent of all Jagannath?s dresses consists of solid gold hands and feet, and many, many gold necklaces, earrings and various gold ornaments. It’s said that on this day, between the three deities they are wearing more than one ton of gold — an appropriate dress to pacify the goddess of fortune and assure her that he has left his girl friends and fthe simple village of Vrindavan.

The following day, the deities go back inside of the Sri Mandir. First Balaram and Subhadra return to their places on the altar. However, when Jagannath is about to get down from his cart to go inside, Lakshmi’s maidservants slam the Lion-gate shut and bar Jagannath’s entry. Following this there is a dialogue carried out in the form of Sanskrit songs between a representative of Jagannath and a representative of Lakshmi. Jagannath’s spokesperson goes to the gate and loudly proclaims something to the effect of, “Jagannath loves his wife Lakshmi very much. He feels very bad, and is begging for her forgiveness.”

Many things take place after this, which would make our article unnecessarily long. Suffice to say that after many sweet words (and presents!) from Jagannath, Lakshmi finally relents and allows her husband back inside (it’s not only foreign devotees who are barred entry into the temple!).

Jagannath’s triumphant return to the Sri Mandir, is called the Niladri Vijaya and commemorates the day that he was first installed in the temple by Lord Brahma. Once he has returned inside the temple there is another final ceremony wherein they again tie together Lakshmi’s and Jagannath’s cloth.

The couple is finally re-united.