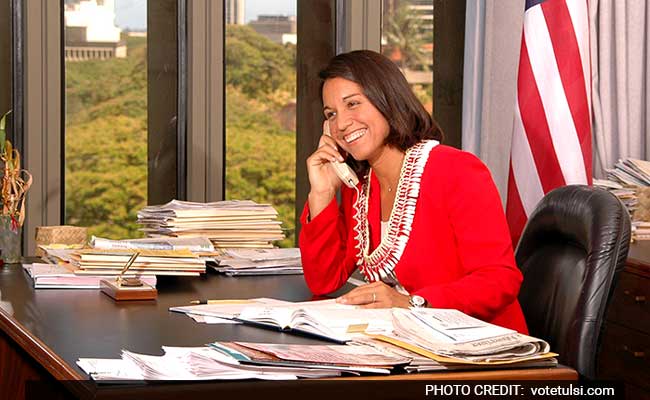 Tulsi Gabbard, the first ever Hindu elected to the US House of Representatives, has asked a Californian educational board to give Hinduism its due place in school text books and not to describe it inaccurately as ‘religions of ancient India’.

California State Board of Education is in final stages of revising and updating the K-12 History-Social Science Framework for public schools.

In a letter ahead of their final hearing on Thursday, Ms Gabbard – who represents the Democratic Party from Hawaii – urged the board to preserve Hindu history and identity by restoring all references to “Hinduism” that were removed or replaced with the ahistorical and inaccurate phrase, like “religions of Ancient India, including but not limited to early Hinduism”.

Just as other religions, including Christianity, Judaism, Islam, and Buddhism are given their own separate and distinct space for discussion in the Framework, so should Hinduism.

“Replacing Hinduism with the term ‘religions of Ancient India, including but not limited to early Hinduism’ is not only inaccurate, but it will cause confusion for students and teachers alike,” she said in her letter dated July 8, a copy of which was obtained by news agency PTI.

In the letter, Ms Gabbard also urged the board to acknowledge the positive roles played by women in Ancient Indian and Hindu society.

“While it is important to discuss the existence of patriarchies in ancient civilisations, it is also critical to discuss the positive contributions and unique roles played by women in those societies,” she noted.

“In the context of Ancient India, Hindu women were able to perform their own religious rites and also authored the Vedas, Hinduism’s sacred texts.

“The framework should thus acknowledge these historical facts when describing the roles of women in ancient Indian society,” she argued.

Ms Gabbard asked the California Board to accurately represent the caste-system in the framework by not depicting it as a defining feature or a foundational religious belief of Hinduism.

“While caste-based discrimination is a reality that must be dealt with, it goes against the essence of Hindu teachings and scriptures, which posit that divinity is inherent in all beings,” she said.

Ms Gabbard said as the first and only serving Hindu-American Member of Congress, she has worked actively throughout her many years of service to promote diversity, equality, and pluralism.

“I firmly believe in the significance of creating an education system and textbooks that uphold these important American values,” she said.

Meanwhile, in another letter to the board, some two-dozen Indian-American organisations requested “fairness and equity” in the way Hinduism and Ancient India are taught in comparison to other world religions and civilisations.

“Hinduism and Indian history are taught to 6th and 7th graders in an outdated, inaccurate, and stereotyped manner. The teachings and histories of other religions are highlighted positively, while Hindu teachings are oversimplified and inaccurate,” the letter said.

“Gender bias, subjugation and discrimination are only conflated with Hinduism, in spite of their presence in every religion’s history. And Hinduism’s pluralistic ethos, concept of spiritual unity of everyone and everything, and contributions of women are ignored,” these organisations said.