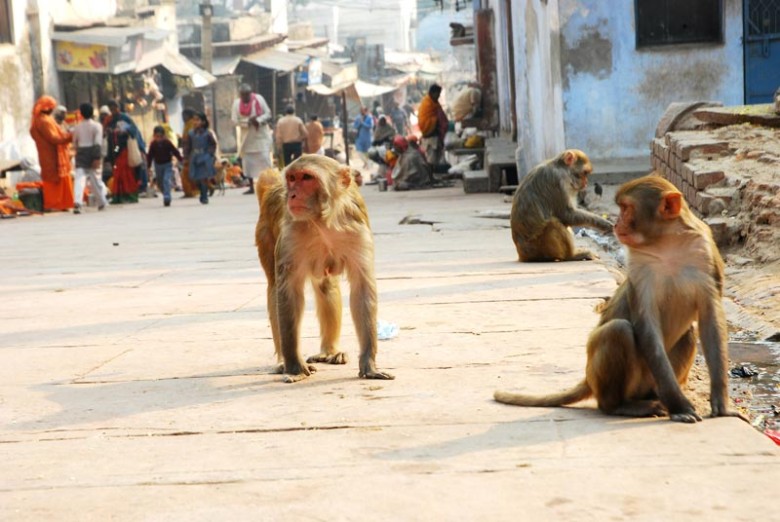 Police in the temple town are under attack from aggressive monkeys. After numerous incidents of simians barging into police stations and taking away files, walkie-talkies and vital documents, the men in khaki have put up iron grills around stations to withstand what has become a siege.

The rest of the town too has witnessed numerous monkey attacks, with nearly 1,000 citizens being bitten during 2014-15, while six persons have died in the past three years. Finding a solution to the monkey menace was part of the campaign promises by local MP Hema Malini, but little has been done about it. Many plans, like shifting the monkeys to the jungles around Vrindavan and introducing a “monkey safari” there for visitors to this religious town, have been made on paper but nothing has taken off yet.

What more can describe the reign of terror that the animals have unleashed here, than the fact that protecting President Pranab Mukherjee from them was a major part of the local administration security plan when he visited Banke Bihari Temple in 2014.

Talking to TOI, Sanjay Shukla, in-charge of Banke Bihari police post said the simians have become a major headache for them. Besides the usual complaints about monkey attacks, police now have to defend themselves inside their own offices.

“There have been instances when they have run away with our walkie-talkies,” he said adding that the department was forced to fortify the police post by erecting meshed iron grills around it, a common sight in Vrindavan’s houses and temples.

A policeman deputed for traffic control near Banke Bihari Temple said, as part of their daily duty routine they keep on advising tourists to save their belongings from monkeys, who attack people when they try to resist attempts at snatching objects. TripAdvisor, a popular travellers’ site, also carries comments about the monkey menace in the temple town.

Chairman of Vrindavan Nagar Palika, Mukesh Gautam, admitted that this remains a major problem here. He said they had written to the state government and only recently received Rs 75,000 for the relocation of the simians. He said they would be floating tenders soon for this.

However, many experts felt that relocation may not be the solution to the problem, pointing at similar projects in Himachal Pradesh and Haryana, which failed. Sterilisation, said officials, could be a solution, but is politically risky. “UP is the land of Lord Rama and touching the ‘vanar sena’ can be a religiously sensitive matter,” said an official, on condition of anonymity.