Home Philosophical Articles Who Will Be the King? 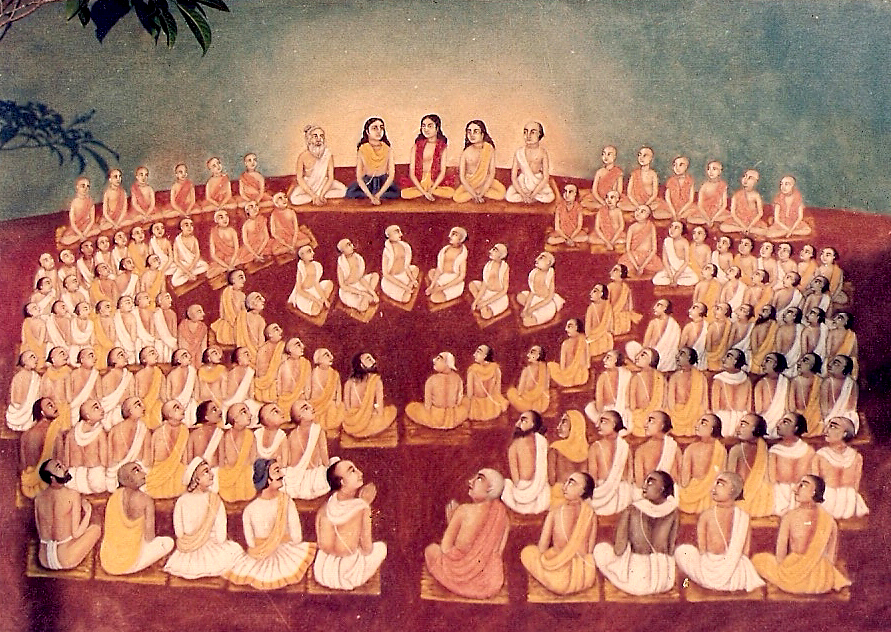 Sri Caitanya taught that varnasrama dharma is external. It deals with ethics and morality, which have little to do with spiritual life proper. Although Sri Krishna says that varnasrama comes from him (tasya kartartaram api mam), in the very same verse he tells us that he is not personally involved in it (viddhy akartaram avyayam). Thus, engaging in varnasrama is not the goal of life. When we are concerned with attaining the actual goal of life, many things will be rejected, even though they may have some utility in realizing the goal.

In the terminology of the Gita, a psychologically well-adjusted person is one who is aware of the particular influence the gunas exert on his or her psyche and thus acts in consideration of these influences. Regardless of which gunas one is predominantly influenced by, this basic awareness is itself the influence of sattva, which subtly governs the Gita’s varnasrama social system. In the Gita’s vision, the essential first step of goodness is to be situated in one’s prescribed duty, a duty that corresponds with one’s psychology. By being properly placed, one finds a sense of harmony with one’s materially conditioned self. Such harmony facilitates the cultivation of spiritual life proper.

One whose actions are not determined in consideration of one’s psychology will be out of balance and thus more easily fall prey to the influences of rajas and tamas, passion and ignorance. At the same time, sattva itself must also be transcended because it keeps us from ultimate freedom in loving union with the Godhead. Under its influence one often remains a prisoner to spiritual tradition, rather than realizing the tradition’s essential message.

To the extent that the psyche is predominated by sattva, one can directly and naturally pursue transcendental life; whereas those dominated by rajas and tamas will find this course more difficult. For such people, although they may progress in an absolute sense, relative problems, such as psychological dysfunctions, may arise and create impediments.

Personally, I think that in the interest of “establishing varnasrama” we should take into consideration the extent to which modern society is gravitating towards a kind of social integration rather than the social segregation involved in varnasrama. Take an essential look at this modern tendency, find the value in it and go with that, advocating something that does not go radically against the current of our times and yet fulfills the essence of varnasrama.

Humanity seems to be gravitating towards the common ground of our species as humans, rather than perceived differences of race, sex, creed, etc. This has value, yet equality and fulfillment, properly understood, are not attainable within the realm of morals. Humanism and morality can never fulfill the soul. Nor can morality realize its own ideal of a perfect human society and remain vital, because morality itself is dependent upon having a society in need of morals. A perfect society is not in need of morality. Spiritual life transcends varnasrama.

Equality of opportunity and representation, the heart of democracy, belong to the realm of the soul. The common spiritual practice recommended by Sri Caitanya for all to realize this equality is chanting the names of God. In order to do so peacefully and progressively, it will be helpful to develop in terms of being well-adjusted individuals (sattva-guna). Although this may happen through the direct culture of spiritual life, practically we find that many people after years of chanting have not developed the clean heart that is representative of the influence of sattva.

Thus the need is for daiva-varnasrama, varnasrama for devotees, as envisioned by Thakura Bhaktivinoda. The very heart of varnasrama is about facilitating the development of a well-adjusted, integrated human being, and that development progresses from being aware of one’s psychosomatic reality. This in turn assists one in one’s spiritual practice.

The principle of varnasrama, based as it is on consideration of the gunas, is universal. It need not be limited to a literal expression of this universality relative to times gone by. After all, it is material: it concerns the realm of relativity—morality and ethics. Its value ultimately lies in its advocacy of an absolute reality that transcends it. Moksa renders it altogether meaningless, whereas prema, in doing the same, superficially employs it in the Vraja lila. Unless varnasrama is thought of in this essential sense, I do not see much scope for “establishing varnasrama” today—even in the society of devotees, much less in human society. Indeed, who will be the king?