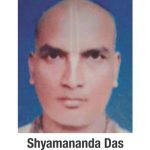 Sixty-two-year-old Shyamananda Das was plucking flowers for religious services yesterday morning. This was when assailants riding on a motorbike came and hacked the Hindu priest to death.

Hours before the murder, two Shibir activists were shot dead in a “gunfight” with police just a few kilometres from the Hindu temple.

Shyamananda, also known as Babaji, is the latest among six Hindu men killed by suspected Islamist militants in Panchagarh, Gopalganj, Tangail, Pabna and Jhenidah. Besides, a Hindu college teacher narrowly survived a murder attempt in Madaripur on June 15.

At least nine people have become victims of such killings since May 1. They include a Christian grocer, a Hindu priest and the wife of a police superintendent hailed for successful anti-militancy drives.

Shyamananda’s murder took place just a couple of weeks after police launched a weeklong crackdown across the country, arresting about 194 suspected militants. According to the police headquarters, the first four days of the drive saw arrests of around 11,500 others, mostly wanted accused.

A devotee, who witnessed the murder from a few yards away, told The Daily Star that she was standing outside her house nearby the temple around 5:30am when Shyamananda opened the gate of the temple. He lived near the temple, locals say.

Shyamananda entered the temple complex and started plucking flowers. “Suddenly, three people aged between 22 and 25 years came in a motorcycle and stopped just 15 to 20 yards off the temple. All of them were wearing masks,” police quoted the witness as saying.

Two of the youths got down from the bike and walked into the temple complex. The third was on the bike, a 100cc Bajaj Discovery motorcycle, keeping the engine on.

The two, wielding machetes, first hacked him in the head, then in the neck and finally in the back. The priest fell down on the ground instantly.

After around two to three minutes, the youths sped away with the motorcycle through Magura road, police quoted the witness as saying.

As the devotee and another witness screamed for help, locals rushed to the spot and took the priest to Jhenidah Sadar Hospital where doctors declared him dead.

While talking to The Daily Star, the second witness gave a similar version of the incident.

OC Hasan Hafizur Rahman of Sadar Police Station said this murder bears the hallmarks of militant-style killings taking place all over the country.

Shyamananda left home 10 years back and since then he had been serving as a priest at the temple. He was unmarried and a follower of Vaishnavism, said temple’s President Subal Chandra Ghosh.

Earlier on June 7, Ananda Gopal Ganguly was killed in a similar fashion in Sonakhali area under Jhenidah sadar.

Meanwhile, Bangladesh Hindu-Bouddha-Christian Oikya Parishad yesterday formed human chain in front of the national press club, protesting the killings of minority people one after another.

They also demanded government steps to catch the killers.

Home Minister Asaduzzaman Khan Kamal hoped they would be able to arrest the killers since there were eyewitnesses.

“We have been watching the movement of such criminals since long. So, we’ll be able to reveal the mystery like that of other such incidents,” he told reporters at his residence in the capital.