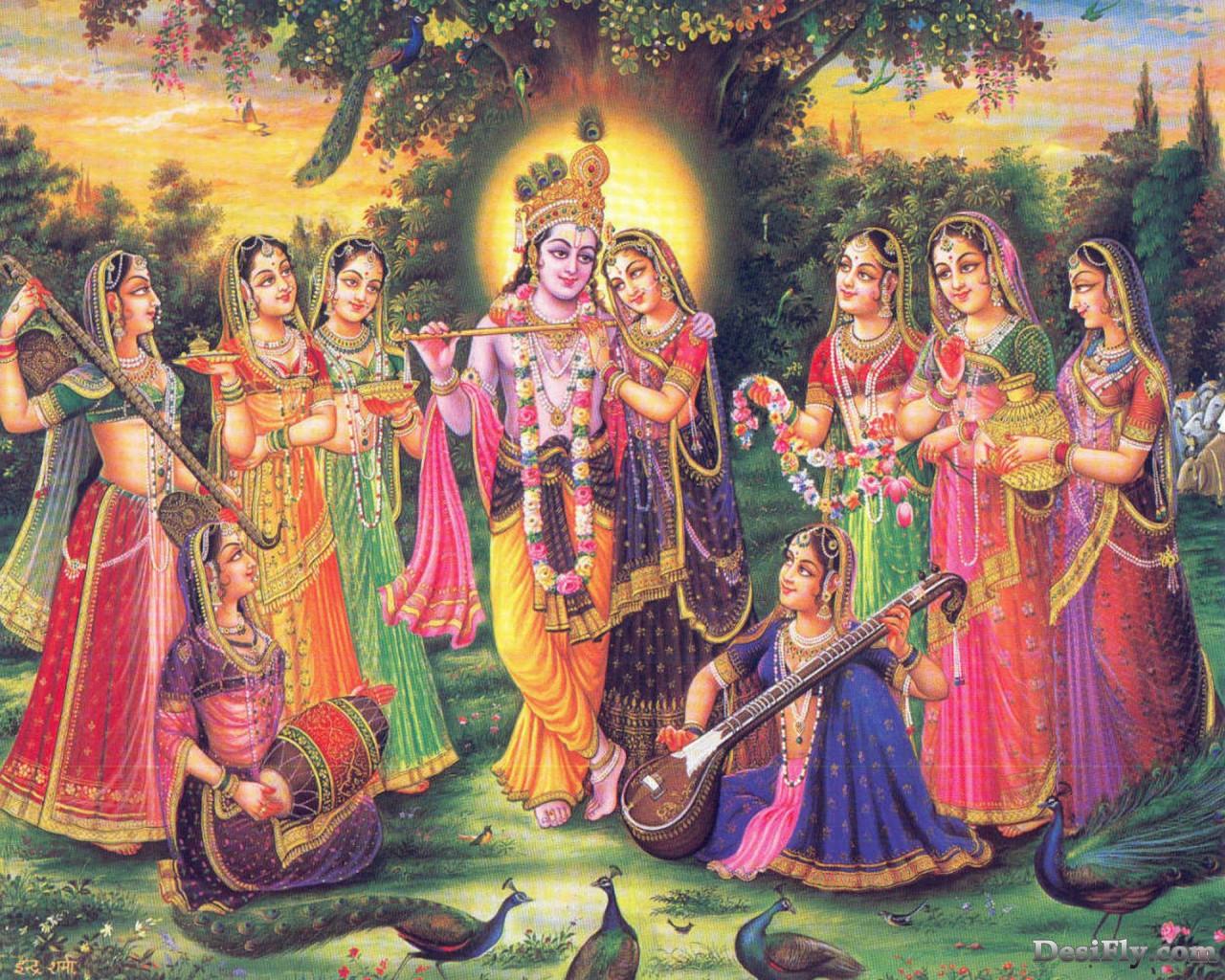 Srila B.R. Sridhar Dev-Goswami Maharaj responds to a question about a particular lila of Krsna and Radharani.

We should not venture to try to conceive about those lila, because the misrepresentation will be heard and in future we shall have to meet the great difficulty, when really we shall face that soil, position. So it is not to be tackled. Only if we come in connection, we should show our reverence and keep it for our future. Do you see? The higher mathematical astronomics, here the brain will be puzzled and we will misconceive, and afterwards we will have to face a great difficulty. So many misunderstanding, or mal-understanding will come to take place. It is not so, as conception we can have in our best, consciousness here, it is far, far, beyond, so we shall not. Fools rush in where angels fear to tread.

Only this much we shall try to think, that Krsna is all in all, and all His whims, His desires are purest and purifying the atmosphere. The standard of purity must be realised, what is the real standard of purity, purity, to be acceptable to Krsna. Only pleasures are condemned for our selfish end, selfish end, because we are deviated from the Absolute Good of Reality. So what is normal, or absolute good in the highest realm, if that sort of right is exercised here in this mundane plane it is a great hindrance to that, to reach there.

The prejudice, mollified prejudice, that won’t be, it will be very hard to remove them. That is aparadha, aparadha, misconception, but misconception not innocent but in the form of offence. Offence, because that plane is not material. Not objective but subjective. Whatever misbehaviour towards the higher subject, that is all offence and that is detrimental to us. We should remember, fools rush in where angels fear to tread. So we may hope the time may come once, when we shall be able to deal with those things properly.

Fleeting desires in our stage, jnana-karmady-anavatam. Systematic activities with religious colours, having some relation with the spiritual truth, elevation, but with connection with spiritual truth, that is karma. Jnana, to understand that the environment where we are present, everything is undesirable and harmful. And eagerness to renounce the whole present circumstance and environment, tyaga, liberation, emancipation, negligence and also inquiry after things subtle, higher, where we can have some subjective position, in the subtle world where we can have our subjective position, we can control our subtle forces. anavrtam anukulyena krsnanu. And also to reject the proposal of going against the pleasing play of the Lord, that is suddha-bhakti, bhakti proper. Then there is the Paravyoma, and then Krsnaloka. Then there is also santa, dasya, sakhya, vatsalya, though not the same with this world, but similar.

We can try to enter into, but this madhurya-rasa is very mystic and of the highest type, especially parakiya, parakiya, which is not sanctioned by the society, nor by the scripture, such independent contact with the Lord. He’s above all, above everything, not only above my life, my highest prospect, the society, the relatives, even my religion, conception of religion. Everything is one side, and all rejected for our quest for our union with the truth, with the highest substance.

So the step by step, we must have to go forward, otherwise if from the lowest step we try to understand the highest, that will be misconception and those errors will be very difficult to be removed. So we are told don’t try to approach from this mundane plane. The Bhagavatam has given the greatest warning.

Yes, that is the highest achievement, no doubt, but never venture to approach that in a non scientific way. In a proper way. If you do you will be finished. Jatu means never, no, jatu, never try to approach this higher truth. Even by mind, even mentally. The sahajiyas are practically trying to imitate that but Bhagavatam has said clearly that not even mentally should you try to approach those lila, that heavenly, the divine lila of the Lord, so secret, private, purest thing, even mentally. What to speak of physical imitation, but mentally also you don’t indulge yourself to bring that thing in your imagination.

Who is not master of his own self, who has not controlled all his selfish propensities, tendencies, if he does so what will be the effect? If due to foolishness, stupidity, he ventures to approach even by mind, he will be destroyed, ruin is sure. Even due to his ignorance or stupidity or foolishness, he ventures to mix, to associate with that higher truth, he will be finished. How? Who is not Mahadeva, Siva, if he goes to drink the poison he’s sure to die, but it was ornamental to a man of position like Mahadeva. Mahadeva, He took the poison, but He was nirakantha, some ornamental spot came in His throat, He did not die. But if in an inferior position than Siva he goes to drink the poison he is sure to die.

This is also like that, so don’t venture. It is not so, it is not so lower achievement, the highest achievement, and you are to follow step by step, step by step, and according to your purification you will be able to perceive, to conceive, otherwise it will have no meaning to you. So really if we want that high thing, then we must be very much careful, otherwise our future, our prospect, will be spoiled forever.