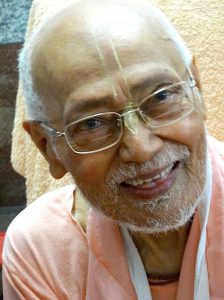 Supreme Lord is Transcendental, His Absolute counterpart Grace-incarnate Form Gurudeva is also Transcendental. They are both beyond comprehension of the conditioned souls of the world. Only a bonafide surrendered soul can narrate Transcendental qualities of Supreme Lord and His Absolute Counterpart Gurudeva, to the extent of his degree of submission. There is no end of degree of submission and therefore there is no end of realisation of Transcendental qualities. As such, even a surrendered soul cannot say, whatever he has realised about Supreme Lord and Gurudeva is the end of his realisation, what to speak of conditioned souls of the world. The realisation of God and His Personal Associates has got no end, it will go on ad infinitum. With humbleness when we sincerely endeavour to write or speak about the glories of Supreme Lord and Gurudeva, They will accept our service with satisfaction, forgiving our shortcomings.

(1) Remembrance of Guru, Vaishnavas and Bhagavan will remove all obstacles and bestow devotional objective.

(2) Praying of the Grace of Vaishnavas and Gurudeva can bestow all attainments.