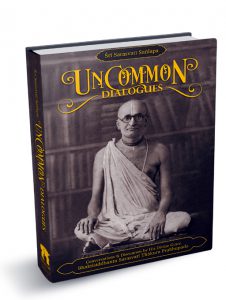 It is our great pleasure from Touchstone Media to present to you our newest publication, Sri Sarasvati Sanlapa: Uncommon Dialog

The long awaited book has finally being released. Sri Sarasvati Sanlapa are conversations of Srila Bhaktisiddhanta Sarasvati Thakura with the eminent scholars, theologians and religious leaders of his time.

“Sri Sarasvati Sanlapa” or Uncommon Dialog, the title of this book is so named because the contents are not ordinary conversations of this mundane world. It is uncommon as the sound vibration coming from the mouth of an empowered devotee of Lord Krishna takes us far away from this world of miseries to the land of eternity and bliss.

“Mundane sounds are generally received by the ears and the other four knowledge acquiring senses. The sounds that the four other knowledge-acquiring senses are unable to receive are called alaukika, or uncommon, transcendental, sounds. The transformations of bodily limbs that manifest while uttering alaukika sounds is unintelligible to ordinary people. In this regard, one should carefully discuss the statement, vaiṣṇavera kriyā mudrā vijñeha nā bujhaya — “Even a very intelligent man cannot understand the activities of a pure Vaiṣṇava.” The language and internal sentiments of a Vaiṣṇava are not accessible to ordinary mundane people.

“Thoroughly maddened by the ecstasy of the intoxicating beverage of love for Kṛṣṇa, we shall enjoy life running about, rolling on the ground and dancing in ecstasy.” This statement of a Vaiṣṇava is not understandable by ordinary people.”

Srila Bhaktisiddhanta Sarasvati Thakur was initially guided by his father, Srila Bhaktivinoda Thakur and later he took initiation from the Vaisnava stalwart, Srila Gaura Kisora Dasa Babaji Maharaj. With the onset of Gaudiya Mission, Srila Bhaktisiddhanta Sarasvati Thakur became the fountainhead of a sublime era of Krishna Consciousness all over. He re-established the foundational axiom of Gaudiya Vaisnava principles through rigorous preaching and his bona fide authoritative dissemination of knowledge permeated swiftly within all. His discourses, conversations and lectures were carefully preserved by his dear disciples.

‘Sarasvati Sanlap’, The Uncommon Dialogues is a nectar trove of intricate Vedic knowledge, sheer spiritual inspiration and guidelines for all to become spiritual warriors. Every person reading this book will definitely be boosted to fight the odds in devotion. Apart from being the living encyclopedia, Srila Sarasvati Thakur was a living embodiment of the teachings of Lord Chaitanya and the six Gosvamis, and a valiant Acarya.

Isvara dasa, the publisher and compiler of the book proudly flaunted the book by quoting:

“Being very pleased to have heard Śrīla Prabhupāda’s words, Professor Johanns began to say as he took his leave that he had met many Hindus, saints, sannyāsīs, and learned scholars in India, but all of them, more or less encourage anyābhilāṣa, or the desire for material enjoyment, and that their honesty and learning is borrowed – that is, it is only book knowledge used to impress people. But today he was very, very glad to have met with a genuine and practical paṇḍita and saintly person. “Śrīla Prabhupāda spoke from the heart,” he said, “and it was clear that he believed his own words so much that without being a self-realized soul such self-confidence could not arise. I also found in him the unique capacity to make others believe the truth he has realized. This is possible only to a great personality who is empowered by God.”

According to the entire Publication team, this book has the potency to fire up and energize the readers to face and overcome many hindrances in devotion and further impel them to inculcate devotion with unfathomable love and true sincerity. This edition is an exclusive corroboration of essential and uncommon instructions of Srila Sarasvati Thakur which is a truly fructified fruit of devotion. The readers will get a guaranteed dose of spiritual impetus.

The book is now available for purchase. It is 280 pages. Hardbound Print, E-book in PDF, Epub and Kindle Format.

Hence make the best of the opportunity available before you! You can also order the book directly if you are in India by calling us at +91-8336916108 or through our website, or just by writing to us at info@touchstonemedia.com!