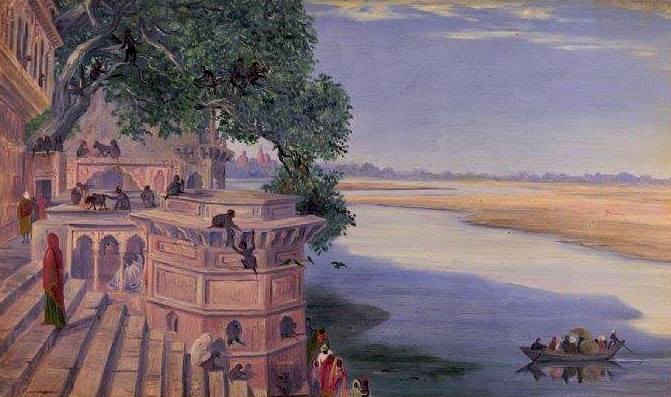 This is the text of the letter sent by members of the Braj Vrindavan Heritage Alliance to register a protest against the design and layout of the Yamuna River Front Development Project in Vrindavan.

With this letter we would like to bring your kind attention to the River Front Development Project that is currently being executed on the Yamuna River in Vrindavan. After visiting the site of work and receiving information from reliable sources about the design and layout of the project, we are very much concerned about the future of the Yamuna Ghats and the river flood plain.

We have met several administrative officers including two District Magistrates (i.e., Shri Rajesh Kumar, on 20th May, 2016, who has now been transferred after the Jawawar Bag, and the present District Magistrate Shri Nikhil Chandra Shukla, on 8th June), to procure a copy of the Detailed Project Report.

We have also met the Chief Development Officer; the Vice Chairman of the Mathura Vrindavan Development Authority and other officials in earlier occasions to understand the components of the project. Unfortunately, none of them could provide us any satisfactory information about the project nor made the copy of the DPR available.

We have been told by the Executive Engineer of the Irrigation Department of Mathura that a new ghat of 15 meters will be built beyond Keshi Ghat, which is the only ghat where the Yamuna has touched any of the ghats in recent times.

The proposed new ghats can never match the beautiful architectural patterns, pillars, arches, jharokhas, of the ancient ghats. Building new ghats as the extension of the old ghats will further distance the Yamuna from Keshi Ghat and other ghats. This appears to be blatant violation of the rules made for the rivers.

Moreover, Keshi Ghat is known for its panoramic view of unmatched architecture, which is situated right next to the ASI protected monument of Jugal Kishore temple, within 100 meter aerial distance of the monument.

The ancient ghats were built where the Yamuna touched the land of Vrindavan. The ghats were named after the pastimes of Lord Krishna, thus the faith of the devotees are linked with these Ghats. Keshi Ghat was built resembling the pastime of killing the Keshi Demon, the clothes of Gopis were stolen at Cheer Ghat, Krishna became a bumblebee at Bhramar Ghat and so on.

With less water flowing in the river Yamuna due to the construction of barrages upstream, the garbage, debris and rubble were thrown onto the Yamuna flood plain, which eventually piled up to to a height of 20 ft, in many cases burying the ancient ghats. The illegal dumping was later paved over to build a road for motorable purposes.

There are only a few ghats left nearby which the Yamuna flows during the monsoon season. We would like to see a sufficient flow of water maintained so that the river remains close to the original ghats all round the year. The Yamuna could be brought back to at least some of its old ghats with only a little effort. The proposal of filling the river bed with soil will lead to disastrous consequences in future.

In some places like Imlitala, Shringar Bat, Ranapat Ghat, etc., the Yamuna flows right up to the illegal road built between the ghats and the Yamuna. Here, the Yamuna bank is being filled with sand and soil up to the road level. We were informed that trees will be planted there. We encourage the forestation, but filling up the Yamuna bank further to the road up to 10 -15 feet height will not allow the Yamuna to come back to its ghats or even to the so-called road.

The construction of the new ghats beyond the Parikrama Marg on the river bank will legitimize the illegal encroachment on the Yamuna Flood Plain.

We have come to know from the reliable sources and local media that a parallel drain will be dug beside the river, which will be released three four kilometers away in the forests, without any treatment. There is no provision of building a sewage treatment plant (STP) in the project. Consequently, the ground water will be polluted, and it may pollute the river again.

Allowing the project to continue without environmental impact and social impact assessment will result in irreversible damage to the ecology and heritage of Vrindavan. Historically, the Yamuna river system as a whole provided ecosystem services such as natural flood water control, ground water recharging, habitats for different flora and fauna, promoting biodiversity, and ameliorating adverse climatic conditions. Years of encroachment and dumping effectively sanctioned by urban planning and urban governance decisions made by the local governments, further threaten this interconnected water lever system.

Apparently, the project being executed on the bank of Yamuna is disastrous for the environment, culture and heritage of Vrindavan. We fear that a well intended project of the government may end up on the line of the controversial Taj Heritage Corridor Project which brought down the Mayawati Government in 2003.

Kindly arrange to provide us a copy of the DPR and ensure transparency in the project by taking suggestions from all stakeholders.

Thanking you,
With regards,
Yours faithfully,